‘The Originals’ may have been cancelled by The CW, but its stars don’t seem to be moving far.  Riley Voelkel is the second ‘Originals’ star to migrate to ‘Roswell, New Mexico’, the upcoming science fiction series based on the book ‘Roswell High’ by Carina Adly MacKenzie.  Voelkel, who played Freya Mikaelson on ‘The Originals’, will be assuming the role of policewoman Cameron, next to her current co-star Nathan Parsons (Jackson Kenner on ‘The Originals’), who will portray Max.  Cameron is described as being “quick-witted” and “scrappy, sexy, and cool.”  She is also listed as a “realist” that can handle whatever life throws her way.


Good for Riley Voelkel.  The show's a mid-season show so it will air in 2019.  I will be watching.  Riley Voelekl was the best thing about season four of The Originals.  (Season five was a disaster.  Let it go, Marcia, let it go.)  And Nathan Parsons was wonderful as Jackson.

Jackson was a thankless role, Hayley's husband raising Hayley's child with Klaus while knowing Haley's in love with Klaus' brother Eli.  But he made Jackson believable and likeable.

I'm really excited about this.

And maybe Roswell (the original) can span a lot more sequels?  It was a very popular show and its audience has continued to grow.

It could end up like Star Trek, spanning all these shows, if The CW played it right.  They could even create a version featuring Kathrine Heigl in her original role from the series.


Iraq held elections months ago but has still not formed a government.  REUTERS states, "Iraq’s election commission ignored an anti-corruption body’s warnings about the credibility of electronic vote-counting machines used in May’s parliamentary election, according to investigators and a document seen by Reuters."

Oh, wait.  We did.  We pointed this out repeatedly from the moment the Iraqi government announced its intent to use electronic voting machines.  The last time we noted it was in the April 24th snapshot:


Yesterday, REUTERS noted, "A new electronic system will deliver the results of Iraq’s upcoming national election within hours of polls closing, the country’s chief electoral officer said, a marked improvement from previous years when it took weeks to announce the outcome."

This is only an improvement if the vote is secure.  That means that the voting is protected and verifiable.  The Iraqi people should be sure that they own the machines, that there is a paper ballot trail should recounts need to take place and that the machines are inspected to ensure security.  Without taking these and other measures, the machines can be hacked -- just as easily as any other machine can be.  The only real benefit is quick results but quick results mean nothing if the results are questionable.


That second paragraph above is me speaking, not REUTERS.  A point I raise because my many fans in the media felt the need to tell me -- as they so often do -- that I was blowing my "credibility" (didn't realize I had any with them) by talking about "nonsense" like that.  Electronic machines, didn't I understand, were secure.  Blah blah blah.  Anyone want to go public on that?  I'll gladly reprint your e-mail in fool as you call me a fool for raising concerns about voting machines.

Which is not to say that REUTERS and others were not concerned about voting issues.  For example, in the April 24th REUTERS report linked to above, they express concern over . . . voter i.d. cards.  Not over the security of voting machines.

The time to raise concerns about voting machines was before they were used.  Apparently, raising valid concerns risks one's "credibility."  So, instead, the corporate media was silent about potential risks in the lead up to the election and now, months after the election, they want to slam Iraq?


Let's stay with Iraqi elections for a bit more.

Glenn GreenwaldVerified account @ggreenwald
We're going to spend the morning pretending that the US media didn't play a vital role in spreading the lies that led to the worst political crime of this generation: the invasion & destruction of Iraq? Or the worst crime of the prior generation: Vietnam? Or multiple other wars?
Show this thread
11 replies25 retweets112 likes

I do love the liars.  Pe Resists is full of crap as so many are -- either due to an addiction to lying or to their own stupidity.  There is no proof that Vladimir Putin meddled in America's elections.

There is the reality that the US has repeatedly meddled in Iraq's elections.  Most infamously, in 2010, the US government overturned the election results in Iraq via The Erbil Agreement which gave loser Nouri al-Maliki a second term -- in opposition to what the voters wanted.When Pe Resists wants to address that, he can get off his damn high horse.


So can Senator Amy Kobluchar who's usually a bit smarter than the Senate Penises -- Senators Chuck Schumer, Dianne Feinstein, Dick Durbin, and Chris Van Hollen.  But all joined together to declare at the end of last month to denounce interference in US elections.  Yet all the dicks were members of the US Senate (or, in Van Hollen's case, the US House of Representatives) when Iraq's 2010 election was violated by the US government -- led by then-President Barack Obama.

It matters only when it comes to them.  When it someone else's elections, they don't give a damn.  The term is "hypocrite" and that is what they are.

And the interference in Iraq's elections never ends.

On Sunday @LahurTalabany warned that if the parliamentary elections is held on time, it would create more divisions among the political parties and said he favors postponing the elections. #Kurdistan 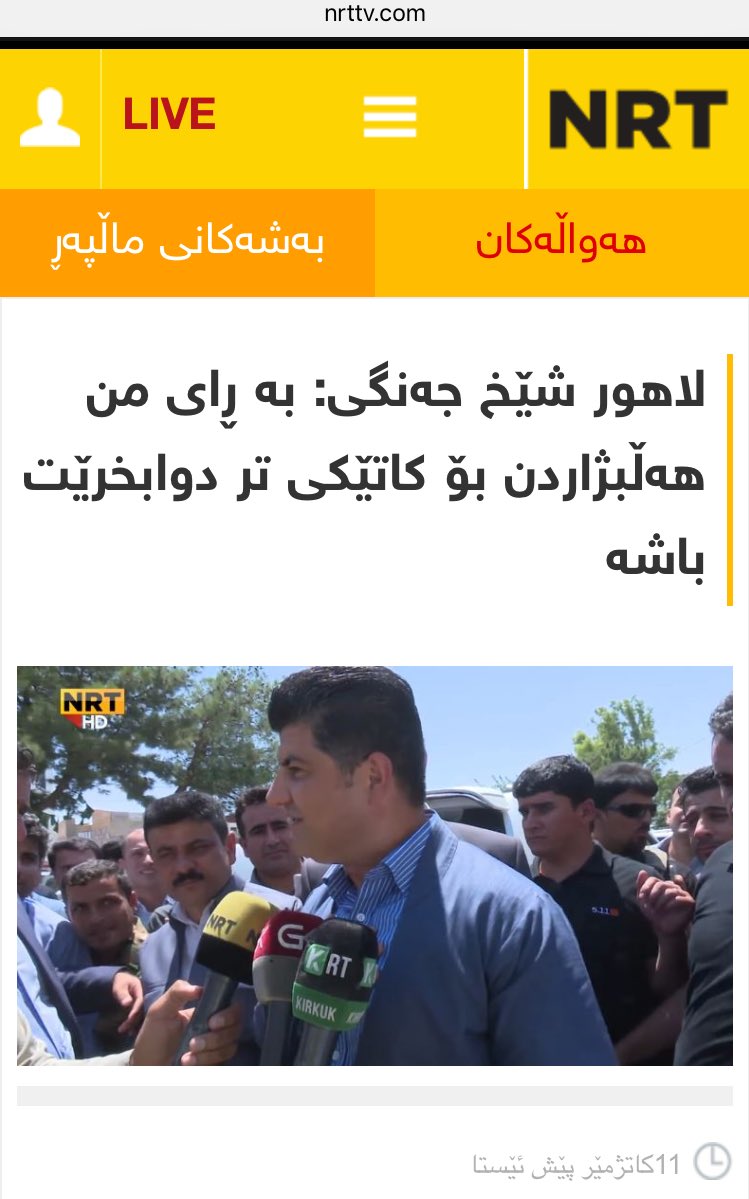 
Mikhan Hasso, a member of the KDP Leadership Council, said that @brett_mcgurk has asked for postponement of the elections based on the request of the PUK and Gorran Movement, McGurk believes elections would create "more division" and affects Iraqi government formation.
0 replies4 retweets3 likes

Replying to @BaxtiyarGoran
Last year the US wanted the referendum postponed until after Iraq elections because it might lead to "instability"; now the excuse will be to postpone elections because Iraq hasn't formed a government or something...
1 reply5 retweets16 likes


Basically, the US wants democracy and everything else to serve their interests or else postponed. Paying peshmerga is a way of having leverage I guess.
2 replies2 retweets14 likes


I’m not even sure how this advances US interests. Is the US interested in inducing more political instability in Kurdistan? Did we not learn from the fallout from our unsound advice on extending Massoud Barzani’s presidential term?
2 replies1 retweet4 likes


They prioritize formation of the Iraqi government, that's the reason.
3 replies0 retweets6 likes


Exactly, they want to keep the status quo until then
2 replies1 retweet3 likes


Except the status quo hasn’t been all that stable in the past several years.
2 replies0 retweets0 likes


Yes but this is a sound reasoning, that the US policy and strategy is lacking in the region leaving us suffering and frustrated.
1 reply1 retweet1 like

I'm sorry but when will Senate dicks Amy, Chuck, Dianne, Dick and Chrissy complain about that?  Never?  Then sit your hypocritical asses down you xenophobic trouble makers.

Again, the default position for Iraqi elections has been US interference.

In 2010, Iraqis chose the Iraiqya slate led by Ayad Allawi.  It was a non-sectarian slate that was inclusive in every way -- religion, gender, etc.  Ayad Allawi should have been prime minister.  For eight months, Nouri al-Maliki threw a tantrum and refused to step down as prime minister.  Despite the fact that it was already known that Nouri was torturing Iraqis in secret prisons and jails, Barack Obama decided to back him and had Brett McGurk negotiate The Erbil Agreement.  Joe Biden showed up in Iraq to give a speech on Ireland that had Ayad Allawi and others present confused as to whether Joe was drunk or stoned.

Had the Iraqis been able to have the government they elected in 2010, they wouldn't have had ISIS.  ISIS took hold because of Nouri's repeated persecution of the Sunnis.  Not only did the US government install him for a second term, when the Iraqi politicians used the Constitutional method to remove Nouri, the US paid off fat whore Jalal Talabani to stop the process.  Jalal created a new power for himself -- he wasn't merely, as the Constitution outlined, to present the petition for a no confidence vote to Parliament, he was to check every signature and not only ensure that they were valid but also to offer the signer the chance of saying whether they would sign on or not.  Jalal never provided anyone with how many still supported the removal -- it may have been all of them.  Instead, he claimed he had to have dire, life-saving surgery and high tailed it to Germany.  He had elective knee surgery.  Later, in a fight with Nouri al-Maliki, he would have a stroke.  Poetic justice.

Now the US interference led to the rise of ISIS which further destroyed Iraq.

Exactly when are the Senate dicks Amy, Chuck, Dianne, Dick and Chrissy going to issue a statement on that?

When, pray tell, will they take accountability?

Or how about accountability for Barack installing the useless Hayder al-Abadi as prime minister in 2014?

Protesters flooded the streets of southern Iraq again on Sunday, nearly a month into a wave of unrest over corruption and decaying public services, AFP correspondents said
3 replies41 retweets36 likes

Iraqis protesting since the first days of July demanding basic life services and fix the unemployment. The Govt did nothing in reality- only some promising as usual. I think #IraqProtests will not be peaceful, as current, if thr Govt continue careless management and lying to them
0 replies4 retweets0 likes 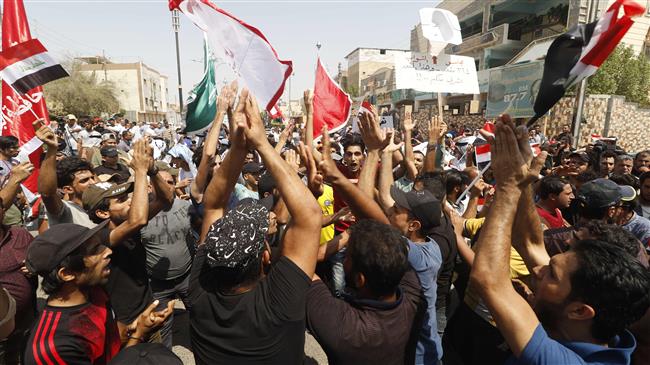 
For four years, Hayder delivered nothing.


When do the Senate Dicks and others apologize for that?