The death of the Black Caucus

speech and didn’t applaud. But most of them voted to give Trump his defense spending wish list. Worthless grandstanding.
8 replies59 retweets112 likes


They just fake and fake some more.

The legacy of Barack.

Before he ran for president, the Black Caucus still had integrity.

They dropped any pretense of opposition to war.

And now they're just a pathetic embarrassment.

They really should be ashamed.

When Maxine Waters refused to stand up for Cynthia McKinney, we should have known she wasn't to be trusted.

Wednesday, January 31, 2018.  The State Of The Union speech is the usual nonsense while Hayder al-Abadi struggles with his campaign in Iraq.


Trump's war on ISIS has resulted in an ALL TIME HIGH IN CIVILIAN DEATHS. How much attention does Corporate Media give this reality? Next to zero. Make America Great Again is more like Make America Kill Innocent People Some More.


I don't know, Tim Black, seems like THE INDEPENDENT's been saying this for almost a year now.  Amy Goodman as well.

Strange that neither saw it necessary to tie Barack Obama to these bombings.  In fact, they just sort of happened during those eight years, didn't they?

As though Sponge Bob Square Pants was dropping them or something.

Answer, Tim Black, is that there is no acceptable number of civilian deaths.

Welcome to the world where civilian life matters.  Hopefully, you'll stay present in this world and not bail as soon as the occupant of the White House switches parties.

Let's stay with Donald for a moment.

TRUMP: "One year later, I'm proud to report that the coalition to defeat ISIS has liberated almost 100 percent of the territory once held by these killers in Iraq & Syria. "

AP FACT CHECK: The progress he cited did not start with his presidency.
#SOTU 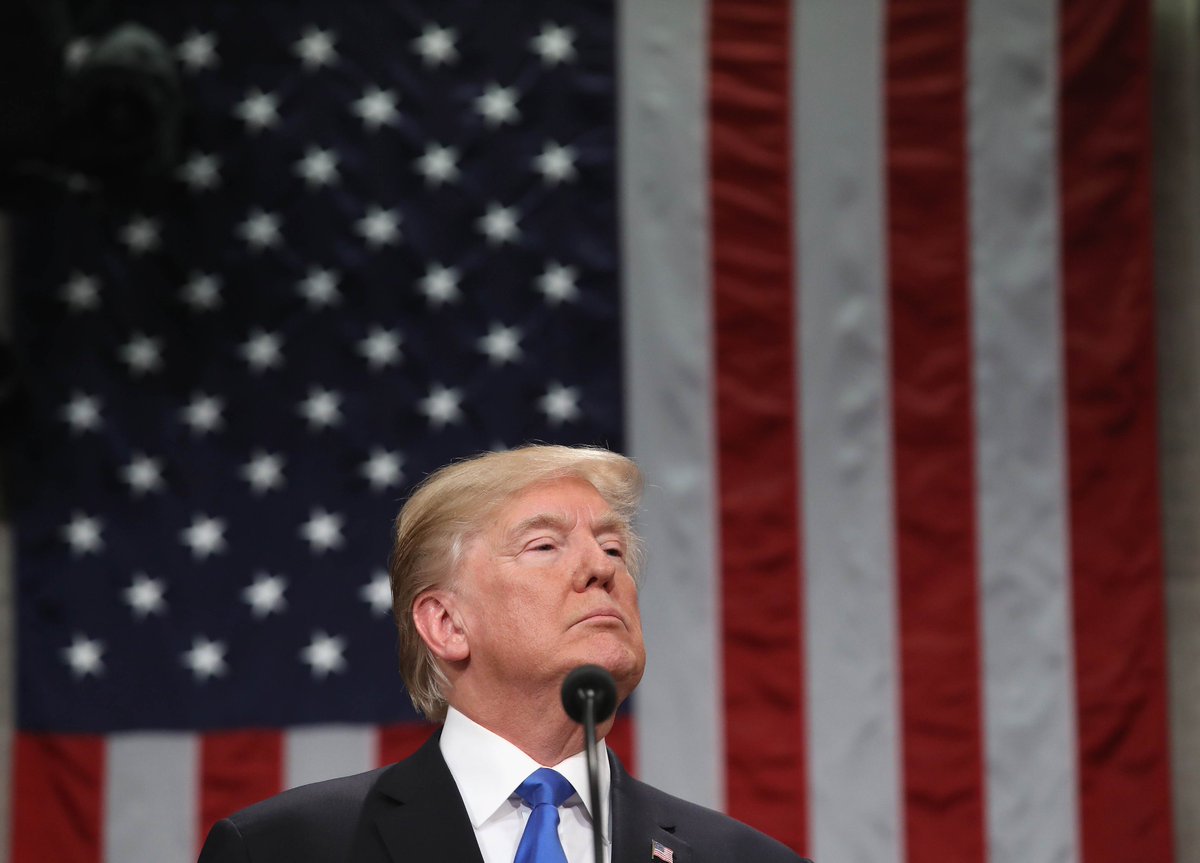 In that statement, he says "one year later" which is because this is an annual speech and it is his first State Of The Union.  I believe that's nit picking on the part of AP.

I'll give Donald credit (and his speech writers) for asserting land no longer under control of ISIS in Iraq and not ISIS defeated because it's not defeated in Iraq.


"Last year, I pledged that we would work with our allies to extinguish ISIS from the face of the earth," Trump said Tuesday. "One year later, I'm proud to report that the coalition to defeat ISIS has liberated very close to 100% of the territory just recently held by these killers in Iraq and in Syria."
There is no doubt the military campaign to defeat ISIS has claimed major victories in the past year. The terror group was expelled from their self-proclaimed capital in Raqqa, Syria, as well as its onetime stronghold in Mosul, Iraq. Exactly how much territory has ISIS lost? Estimates vary, but it's clear it no longer has firm control over large swaths of land as it did during its heyday in 2014. Last month, the Global Coalition to Defeat ISIS estimated that the group had lost 89% of its territory in Iraq and 87% in Syria since that time.
Of course, some of those coalition gains were made during the Obama administration. Just ahead of the inauguration last year, a survey from the analysis firm IHS Conflict Monitor estimated the group had lost nearly a quarter of its territory over the course of 2016. While the anti-ISIS effort began under the Obama administration, military officials and diplomats credit Trump with delegating more of the day-to-day decision making to commanders on the ground, which they say brought new momentum to the effort. Still, experts warn that ISIS remains a threat within the region and, potentially, to the US homeland. As the terror group loses physical territory, it is increasingly turning its attention to online radicalization efforts, urging supporters to conduct terror attacks in their home countries rather than travel to the so-called "caliphate."
Verdict:
True. The US-led coalition cannot yet declare victory in its effort to defeat ISIS. But at this moment, as Trump addresses Congress, the group is clearly in retreat, and has experienced significant territorial losses. The United States now faces the challenge of securing and expanding those territorial losses, preventing an ISIS resurgence, and -- at least in Syria -- determining who will govern that space in the long-term.


We're concerned with the Iraq War but we will note one more aspect only because VOTE VETS can't stop e-mailing.  For some reason, the partisan posers think that I'm going to be thrilled by their nonsense.  I'm not.  But I'll go easy on them by focusing on the Tweet they supplied where they're just applauding the idiotic Tammy Duckworth.  Read the Senator's words closely.


Iraq combat veteran @SenDuckworth called on Trump to provide an analysis of the cost of war with #NorthKorea - not just in dollars and cents but in human lives. #SOTU 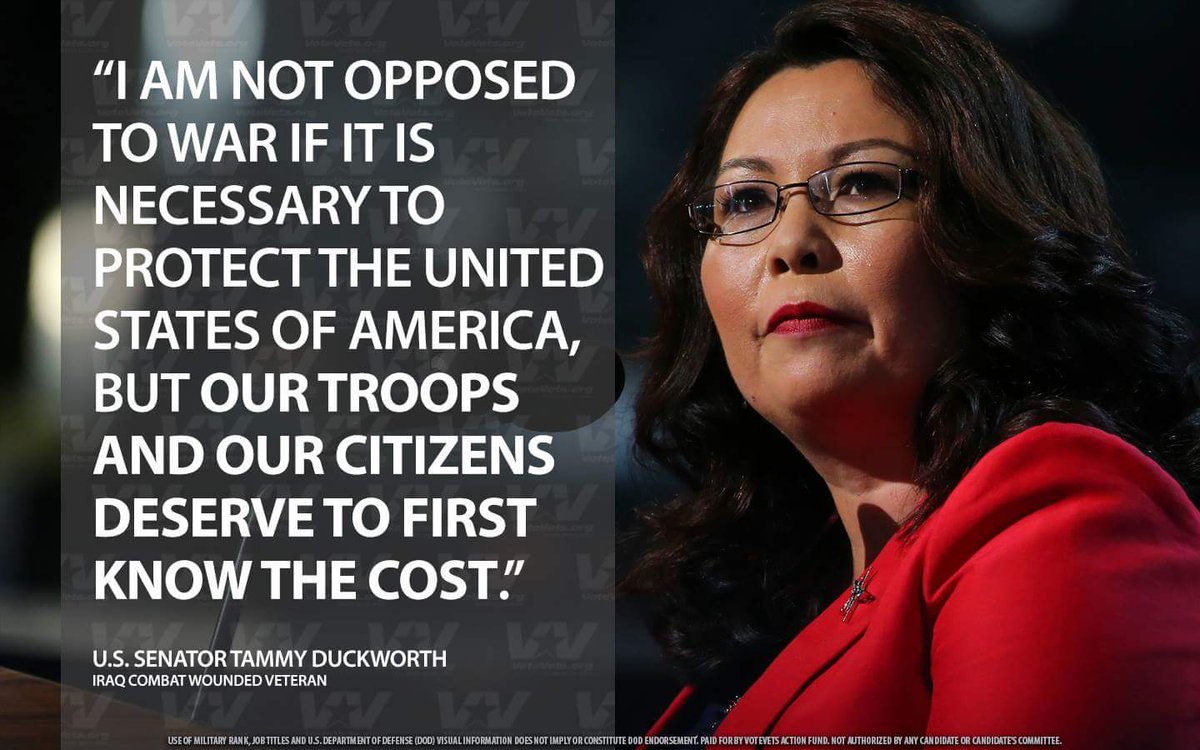 Oh, Tammy, you are always so gung ho to prove who's the biggest and the baddest.

Tammy's always up for war.  But note what she says, "Our troops and our citizens deserve to first know the cost."

They're pretty much all citizens.

Is that confusing to Tammy?

Secondly, if she's going to divide the two, then big no to the nonsense that the troops need to know the financial cost.

The American people deserve to know.

The troops enlisted.  They are there to take orders.

"Okay, but what's the cost first?"

That's not recognized under the law.

What is recognized under the law?

The right to refuse an illegal order.

Of course, War Hawk Tammy never recognizes that nor has she ever defended any war resister.

She really is pathetic.

When you wonder why the US Congress can't respect the Constitution, grasp that members like Tammy Duckworth don't even understand it.

Let's finish up noting the State Of Union Address (as worthless this year as it always is) by commenting on reactions posing as critiques.


She is no Michelle 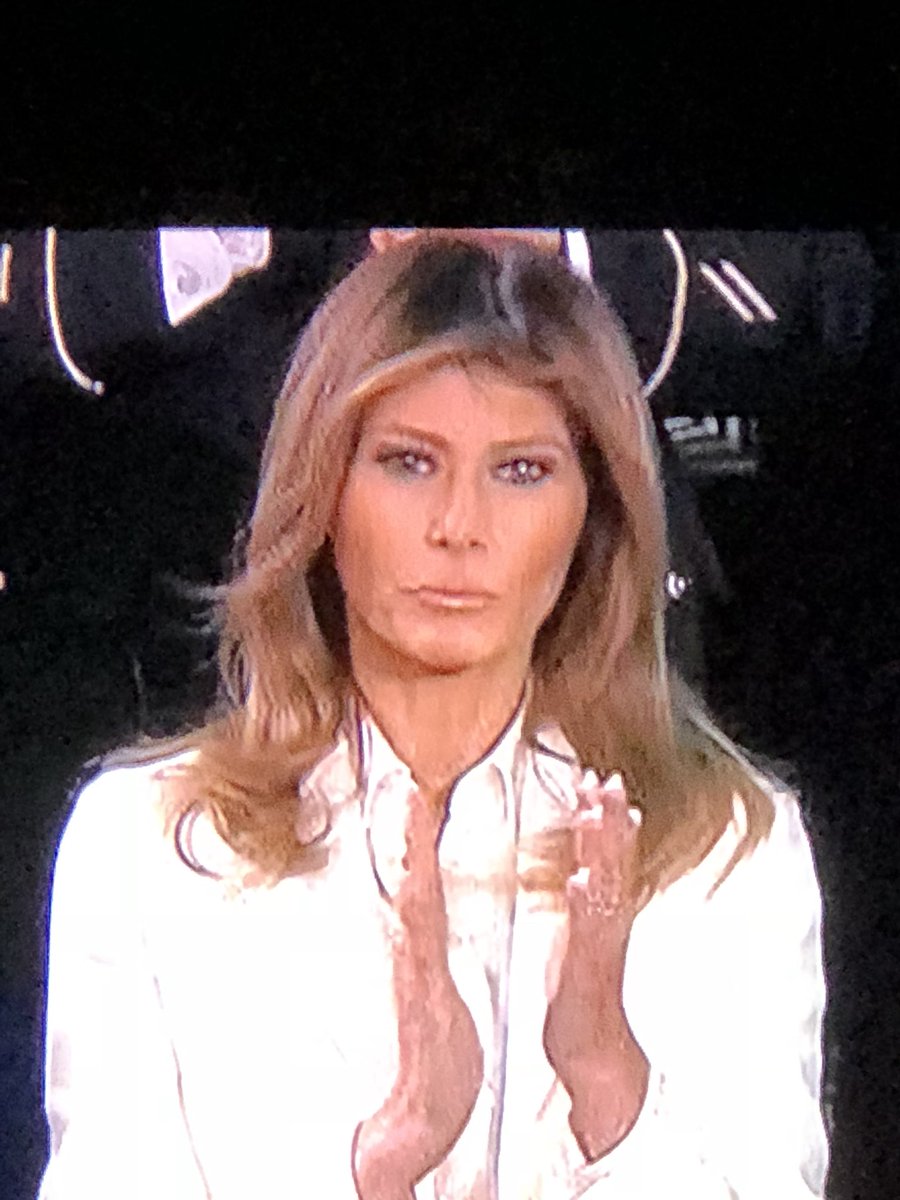 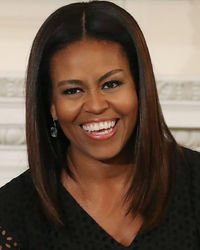 
Nor should she be.

Nor should Michelle have been anyone else.

I don't know what it is about presumably straight males but Twitter's full of their knocks at the First Lady.

Most of them tried to 'do' fashion and wanted to say Melania was dressed like Hillary.

Some even went so far as to suggest Hillary wore it better.

It's not the same outfit.  Hillary should have followed Melania's example and had the jacket close to the hips (possibly, for Hillary, even higher) because Hillary is short and squat and the length of the jacket on her only emphasized how thick and short her thighs were.  She also looked rather 'storm trooper' (STAR WARS, not Nazi) in her outfit due to its boxy cut and her boxy frame.

I don't know why in 2018 we're turning a State Of The Union address into a fashion critique (unless we're all willing to admit how worthless these things actually are) but if we're going to do Fashion Police -- and do it without Joan Rivers -- we're going to need some women and a few gay men -- plus a lot less straight men who clearly know nothing about women's fashion -- especially those straight men who support under-the-bridge troll beards.

Again, the SOTU is worthless regardless of who delivers it.  Patrick Martin (WSWS) nails last night's speech:

On foreign policy, Trump said relatively little, but all of it was reactionary. He called for Congress to “fully fund our great military,” hailed US military operations in Syria, Iraq and Afghanistan, while announcing he had signed an executive order to keep open the US torture prison at Guantanamo Bay, Cuba to house new prisoners seized in the “war on terror.” He insisted that alleged “terrorists” should be treated as “enemy combatants,” and made clear that the US would maintain and expand its network of detention and torture centers.


He threatened Cuba, Venezuela and Iran, as well as the more than 100 countries that voted in the UN General Assembly to condemn the US recognition of Jerusalem as the capital of Israel. He cited North Korea as a nuclear threat to the United States and promised a further build-up of the US nuclear arsenal.

The truly foul character of the speech, the media coverage, and the ceremony as a whole only testifies to the exclusion of any genuine opposition to the political and social agenda of corporate America. Official American politics consists of various gradations of far-right politics, from the pro-corporate, pro-CIA agenda of the Democratic Party to the fascistic ravings of sections of the Republican Party who view even Trump as too soft on immigrants.

Of the highlights above, the most notable one is probably that terrorism suspects will be tried in Iraq (and his laughable claim that they will receive a fair trial).

This is a rebuke to the French government which has stated they will not stand for one of their citizens being tried if execution is on the table.

Will Hayder stick with his stated decision?

Probably so -- at least for the next few months.

He's now staked out a position.

Elections are scheduled for May 12th.  If he goes back on it, Nouri al-Maliki (his biggest Shi'ite rival) will use the change against him.

He announced his huge bloc and then, a few days later, the militias announced that they wouldn't be part of it after all.


With the withdrawal of @Ammar_Alhakeem, @HaiderAlAbadi's coalition becomes smaller and better defined. He may get less total seats, but will have a stronger and coherent bloc.
He is playing hard ball, with an unanticipated level of self confidence and decisiveness.
#Iraq2018 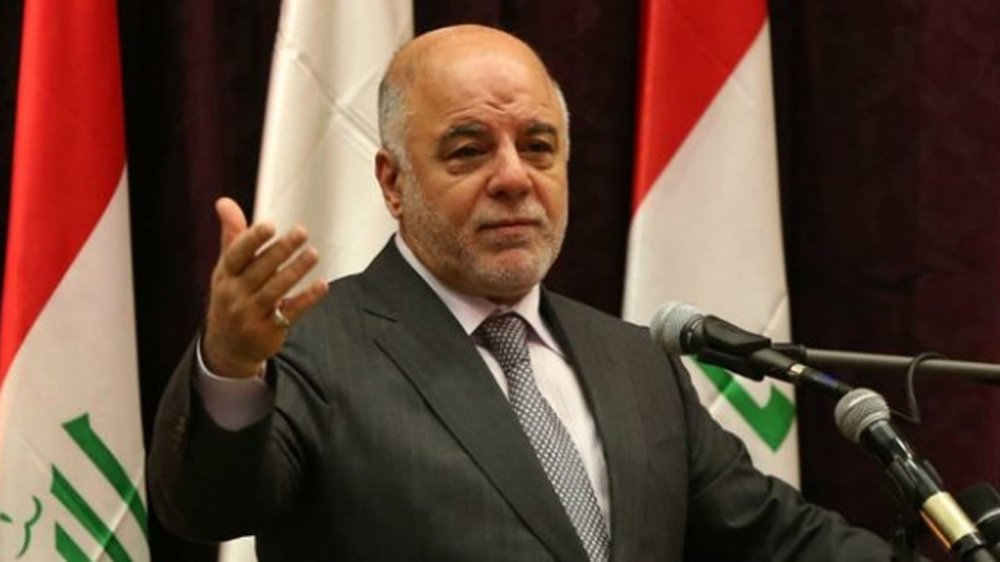 
Less seats makes it more difficult to become prime minister -- but it does not make it impossible.

He can cobble together support post election -- or he can try.

Nouri al-Maliki was forced out by Barack in 2014 and Nouri left the post in disgrace (though he never gave up the prime minister's home).

Here we are in 2018 and he has a real shot at becoming prime minister again.

That says a lot about how little has improved in Iraq. 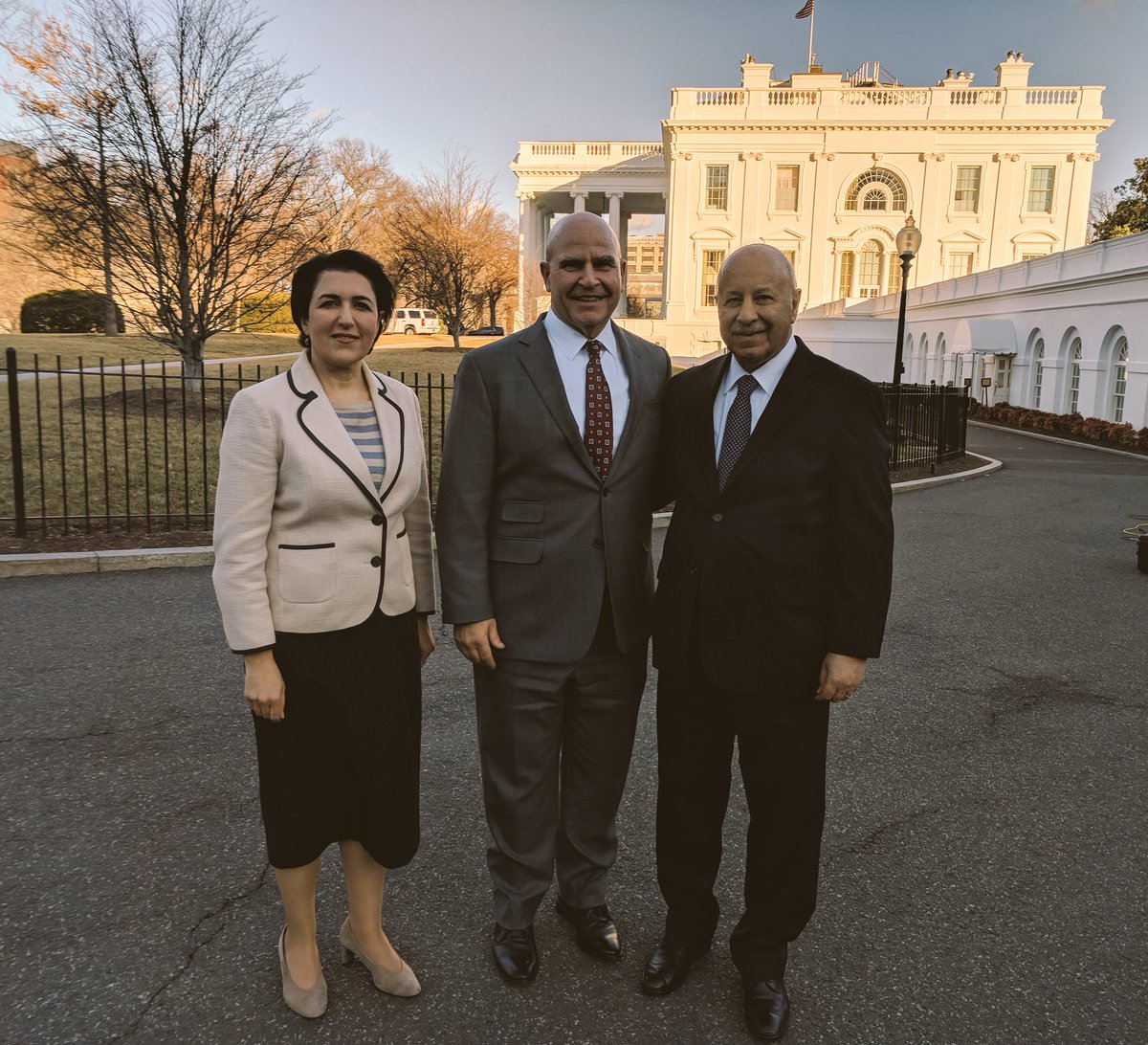 The following community sites -- plus THE GUARDIAN and Jody Watley -- updated: