The FBI looks so bad these days.  Lawless and lacking oversight, it appears they planned to take down Donald Trump.

Sarah Westwood‏Verified account @sarahcwestwood 10h10 hours ago
FBI texts that stand out: Peter Strzok says he has "a sense of unfinished business" that was "unleashed" by the Clinton email case. "Now I need to fix it" Strzok says. Later, he calls the Russia probe "an investigation leading to impeachment" BEFORE he has joined the Mueller team

This is much more important than the Russian nonsense.

A US agency may have tried to subvert democracy in the US.


First the Academy Award nominations are out.

You orchestrated the public blackmail of Mark Wahlberg.

For those late to the party, Michelle asked nothing for her reshoots for ALL THE MONEY IN THE WORLD -- she was doing that to make herself look better and ensure an Academy Award nomination.  Then Mark gets millions for the reshoots because (a) his contract and (b) his agents asked.  So she spends weeks when she should be campaigning instead back biting.  She doesn't have the guts to take it public and hides behind others.

It culminates in a week of nonstop hysteria until Mark donates the money.

Why, Michelle, if you thought it was wrong, did you attack Mark and not the studio that paid him?

Oh, right, even you know if you go after the studio you have no job.

Well, you've got no career now.  VENUM?  You're not going to get any credit for that.

And this was probably your last shot at an Oscar for lead actress but you didn't get the nomination, did you?

The Academy doesn't like greedy.  You were warned.  Remember that in ten years when you're scrambling for a guest shot on some procedural drama.

You can cry with Steven Spielberg who learned that his kiddie past doesn't go away just because he directs an ugly film -- THE POST was the most unattractive film, it looked like a cheaply made, direct to video product.  No best director for him.  No nomination for Tom Hanks.  Ha ha ha.  (Meryl got her annual nomination.)

And no nomination for the screenplay.

THE POST never lived up to its intentions.  It was a lazy, stillborn film.

Applause for many who did get nominated including Mary J. Blige and, in fact, for everyone nominated for Best Supporting Actress -- that will be the most intensely debated category because all gave worthy and outstanding performances.

One month after formally declaring victory over the Islamic State, Iraq now turns its attention to its upcoming parliamentary elections, which will play a significant role in shaping the future of a country long plagued by civil war and sectarian strife. These elections, currently scheduled for May 12, will determine which coalition controls Iraq’s parliamentary Council of Representatives, and in turn, from which coalition the prime minister will be selected. Among the challengers to sitting Prime Minister Haider al-Abadi’s “Victory Alliance” coalition is his predecessor, Nouri al-Maliki, whose State of Law Coalition is seen by many as the most likely to wrestle control of the government away from Abadi. Such a scenario would be disastrous for Iraq, as the return to power of Maliki would undermine the fragile stability of the Iraqi peace and threaten to inflame the underlying sectarian divisions that nearly drove the country apart.
While Maliki’s prior stint as prime minister is largely viewed as a failure, his initial ascension to power in 2006 was greeted with a great deal of optimism. Tapped by the Americans as a replacement to the ineffective Ibrahim al-Jaafari, the former ex-patriot dissident Maliki was hailed as a Shia leader with enough credibility to cooperate with Sunni moderates to weed out the insurgency plaguing the newly-formed democracy. While Maliki was able to work effectively alongside the United States to disrupt Al Qaeda’s operations in Iraq, his failure to manage the ensuing peace and to adequately prevent the rise of ISIS led to his ousting in 2014 in favor of Abadi, and saw him relegated to the largely ceremonial position of vice president.
Despite both being members of the Islamic Dawa Party, Maliki has long desired to regain control over both the party and government from his successor. While Abadi has received significant credit for his role in defeating the Islamic State, he has largely failed in his effort to court stable political allies, as evidenced by the withdrawal of a number of Shia militias from his coalition on January 16. Meanwhile, Maliki has begun actively courting alliances with Iraq’s Kurdish politicians in hopes of bolstering his already significant base of support. Maliki’s ability to form a rival coalition independent of Abadi’s bloc has left the prime minister scrambling for support, and greatly increases the likelihood that a change of power will occur.
Unfortunately, a return to power by Maliki and his bloc would also usher in a return to the corruption and mismanagement that plagued Iraq during his initial tenure.

The elections are scheduled to take place May 12th.  AP has pointed out, "The over three-year fight against ISIS has left most of the Sunni areas in northern and western Iraq in ruins, and poor public services have exacerbated the situation. The Sunnis argue that the current situation will make it hard for Sunni voters to update their information ahead of elections or cast their ballots."

Another election, another effort to disenfranchise the Sunnis.

When does this stop getting excused?

You either allow your citizens equal voting opportunities or you don't.

These issues are the same every election and yet somehow the government's surprised by them?

This isn't a result of faulty planning, it's a deliberate choice.

And the shame of the United Nations and the United States, among others, is so great, that they will go along with the farce in an effort to pretend as if the last 15 years haven't been wasted.

THE MIDDLE EAST MONITOR reports on the European Union and how it's going to continue to support Iraq.

Continue to support a government that abuses its citizens?

Continue to support a government that is repeatedly installed by foreign powers?

The European Union described the general elections scheduled for May as “an opportunity to build a more inclusive and democratic state which works in the interests of all Iraqis”.

Is that what the elections are?

Seems for the elections to result in "a more inclusive and democratic state" they would have to be, you know, inclusive.

Again, those who have participated in the ongoing crime that is the Iraq War have a real desire to spin it as something other than what reality has demonstrated it to be.


Some Tweets about the upcoming elections . . .

for we gen-xers, this nonsense idea that protest made the war end is something we've heard since we were kids. look at recent history: protest didn't end the iraq war. it had almost no effect. what ended the war was the gop losing elections.
14 replies14 retweets99 likes

Wait, Oliver, what end of the Iraq War?

Have you turned so many tricks that you've worn out your mind as well as your body?

US forces are still in Iraq.  They're fighting in Iraq.  On the border with Syria as noted in the BBC NEWS report we highlighted in yesterday's snapshot.

The protests were muted by whores in leadership of various organizations.

Which is why we couldn't get protests in DC in 2006.  It's why in 2007, these same 'independents' used their leadership to support Barack Obama.  It's why the day after the 2008 election, United for Peace & Justice announced they were closing down.

Their job was accomplished.

US troops were out of Iraq?

They were all whores.


Once Barack was sworn in, he could do whatever he wanted and there was no pressure.

Most of all, quit lying, Oliver, because I think your next john is ready for you -- believe this one has been promised a hand job.  Hope you brought handy wipes!


Meanwhile, many worry about the latest actions of the Turkish government.

Halil Celik and Alex Lantier (WSWS) report:
On Sunday, at 11 AM local time, Turkish tanks and infantry invaded Afrin, a majority-Kurdish multi-ethnic region in northwestern Syria. The Turkish forces are targeting the US-backed Syrian-Kurdish Democratic Union Party (PYD) and its militia, the People’s Protection Units (YPG), which control Afrin. At the same time, the Free Syrian Army (FSA), Ankara’s proxy force in Syria, attacked Afrin from the south and east, supported by Turkish tanks and Special Forces.
This aggression by Turkey is a reckless escalation that will exacerbate the conflicts raging across the Middle East and intensify the danger of war between the major powers. With Moscow’s tacit support, Turkey is attacking the YPG, the backbone of the main US proxy force in Syria, the Syrian Democratic Forces (SDF) militia. The danger of this triggering a clash between US forces and Russian and Turkish forces in Syria, and all-out war between the United States and Russia, is very real.
The ground invasion, code-named “Olive Branch,” came after hours of Turkish air strikes on Afrin, including strikes on an airfield used by US forces to deliver equipment and arms to the SDF.
It signifies a historic breakdown of the NATO alliance, of which the United States and Turkey are both members. Given that the Turkish invasion apparently has support in Berlin, it reflects deep and mounting conflicts between the major NATO powers.

The US government doesn't really have a leg to stand on when it comes to criticizing the actions.

How long will you be in Iraq & Afghanistan? Erdogan rebuffs US call to limit Afrin operation https://on.rt.com/8xhr 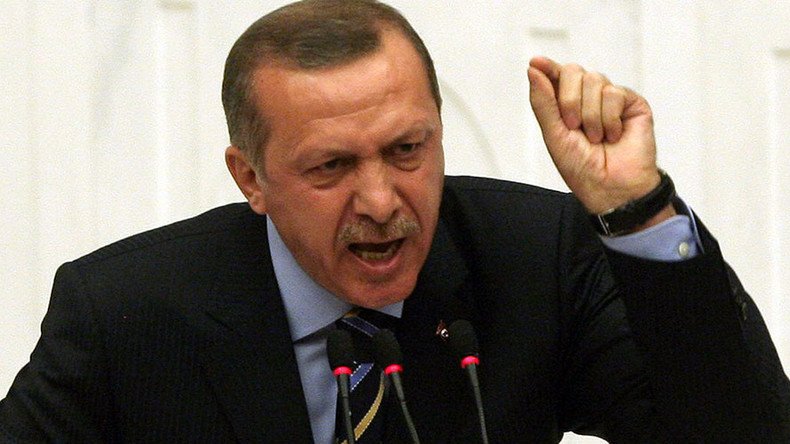 
The US asked Ankara on Sunday to “ensure that its military operations remain limited in scope and duration.”
“The Afrin operation will end when it reaches its goal like the Euphrates Shield did,” Erdogan said while addressing an awards ceremony in Ankara on Monday.
“The US says it ‘should not last for too long.’ And I’m asking the US, how long have you been in Afghanistan, when will it end? You came in Iraq before we came to power. Has the time duration ended in Iraq? You are still there,” Erdogan said.