Sorry, I'm not going to let this drop.  If Caroline Biden were African-American, she'd be serving hard time.  But she's Joe Biden's niece so she walks.

How is that fair?

And with Joe's tough on crime b.s. that put thousands and thousands of African-Americans behind bars, for his niece to break the law, to steal over $100,000 and not get sentenced to prison is b.s.


Starting in the US where the race for the Democratic Party's presidential nomination continues.  And where the media continues to lie.  Yesterday, on CINDY SHEEHAN'S SOAPBOX, Cindy spoke with Danny Haiphong about the new book he has written with Roberto Sirvent entitled AMERICAN EXCEPTIONALISM AND AMERICAN INNOCENCE: A PEOPLE'S HISTORY OF FAKE NEWS FROM THE REVOLUTIONARY WAR TO THE WAR ON TERROR.

But you don't have to go historical.  Look at this:

That is a distraction.  It is a willful 'reporting' to mislead.

Who the hell has ever accused Hunter Biden of doing any work at all -- good or bad?

He doesn't do work.  He's a grifter, a con artist, making money off Daddy's name.

He joined the company in May of 2014, approximately two years later, Joe Biden's getting the man investigating the company fired.

That's why the company hired Joe's son, for that kind of corrupt influence.  Consider Hunter's $50,000 a month protection money.  It's a racket and THE LOS ANGELES TIMES is playing the idiot to distract you from reality.

Bill Maher, of all people, is bothered by the corruption.

Hunter has no experience but is hired for $50,000.  What were they buying?  Daddy's influence.

No one in their right mind believes Hunter was hammering out details or working in a plant.  They know he was hired solely because his father was the Vice President and because they could use that if they needed to.

When the company was under investigation, they used Hunter's daddy to get the prosecutor removed.

Influence peddling, corruption, call it whatever you want but it's unethical and it's not supposed to take place in the US -- not from our public servants.

Donald Trump does it!

If he does it from the White House -- meaning since he was sworn in -- call him out.  Let him have it.  We're not THE TRUMPIAN covering all things Donald.  I do not like him and I have not spent the last years obsessing over him -- I question the mental health of those who have.  But if he's done it, you're not going to find me defending him.


These little scams had real world consequences.  For example, corruption got even worse in Iraq after 2009.  Who was tasked with oversight?  Joe Biden.  And how can Joe, with all of  his unethical issues, call out corruption in Iraq, let alone address it, when he's the poster boy for corruption?

He's the poster boy especially in Iraq where his brother James was awarded a $1.5 billion contract for reconstruction.  James has no construction experience.  No real experience at all other than cashing in on whatever office his brother Joe has held.

This is disgusting and it is unethical.   From Sarah Chayes' "Hunter Biden’s Perfectly Legal, Socially Acceptable Corruption" (THE ATLANTIC):.

Let’s start with Hunter Biden. In April 2014, he became a director of Burisma, the largest natural-gas producer in Ukraine. He had no prior experience in the gas industry, nor with Ukrainian regulatory affairs, his ostensible purview at Burisma. He did have one priceless qualification: his unique position as the son of the vice president of the United States, newborn Ukraine’s most crucial ally. Weeks before Biden came on, Ukraine’s government had collapsed amid a popular revolution, giving its gas a newly strategic importance as an alternative to Russia’s, housed in a potentially democratic country. Hunter’s father was comfortably into his second term as vice president—and was a prospective future president himself.
There was already a template, in those days, for how insiders in a gas-rich kleptocracy could exploit such a crisis using Western “advisers” to facilitate and legitimize their plunder—and how those Westerners could profit handsomely from it.

Not only is it unethical, it should be unacceptable.

'Donald Trump is a crook!'


Do you need a cookie?  A pat on the back?  You just figured that out, did you?

I don't really give a damn what Donald Trump is.  I didn't vote for him.  I do not like him.  There is nothing he can do that would surprise me.

I've known and avoided him for years.

The fact that you're only now realizing what was obvious so long ago, decades, goes to your stupidity and maybe it's that stupidity that allows you to play, "DONALD TRUMP IS WORSE!"

So is polio.  So are many other things.

And none of that changes the unethical behavior that Joe Biden has engaged in.  He has allowed his family to rake in large amounts of money by selling his potential influence.  That is conduct unbecoming.  He's not fit to run for president.

The desperation to look the other way is ridiculous.  You're harming yourself, you're harming future generations.  Unethical behavior does not need to be excused, it needs to be called out.  And if you don't call it out, you are part of the corruption.

"Joe Wilson has passed away."  As noted at THIRD, Joe Biden's not said a word.  Not even a Tweet. Along with calling out Bully Boy Bush's lie about Saddam Hussein seeking yellowcake uranium from Africa, Joe's career includes service in the State Dept:


Having become fluent in French as a teenager, Wilson entered the US Foreign Service in 1976, where he would be employed until 1998.[4]
From January 1976 through 1998, he was posted in five African nations; as a general services officer in Niamey, Niger, (his first assignment) he was "responsible for keeping the power on and the cars running, among other duties".[3] From 1988 to 1991, he was the Deputy Chief of Mission (to US Ambassador to Iraq April Glaspie) at the US Embassy in Baghdad, Iraq. In the wake of Saddam's invasion of Kuwait in 1990, he became the last American diplomat to meet with Iraqi President Saddam Hussein, sternly telling him in very clear terms to leave Kuwait (Wilson, The Politics of Truth 107–27). When Hussein sent a note to Wilson (along with other embassy heads in Baghdad) threatening to execute anyone sheltering foreigners in Iraq as a deterrent, Wilson publicly repudiated the President by appearing at a press conference wearing a homemade noose around his neck and declaring, "If the choice is to allow American citizens to be taken hostage or to be executed, I will bring my own fucking rope." [5] Despite Hussein's warnings, Wilson sheltered more than 100 Americans at the embassy and successfully evacuated several thousand people (Americans and other nationals) from Iraq. For his actions, he was called "a true American hero" by President George H. W. Bush.[6] From 1992 to 1995, he served as US ambassador to Gabon and São Tomé and Príncipe.[4]
From 1995 to 1997, Wilson served as Political Advisor (POLAD) to the Commander in Chief of US Armed Forces, Europe (EUCOM), in Stuttgart, Germany. From 1997 until 1998, when he retired, he helped direct Africa policy as Special Assistant to President Bill Clinton and as National Security Council Senior Director for African Affairs.[7]


Some how, Joe Biden misses all of that -- intentionally.

That period of time, when Joe Wilson stood up to Bully Boy Bush, isn't a time Joe Biden wants to remember because he comes off craven and cowardly at best.  While Joe Wilson called out the lies leading to the Iraq War, Joe Biden embraced those lies.

After he liberated Mosul and defeated the Islamic State (ISIS) on the ground in Iraq, Lt. Gen. Abdul Wahab al-Saadi was removed from his position as commander of Iraqi Counter-Terrorism Forces (ICTS) on Friday by order of Prime Minister Adil Abdul-Mahdi who transferred Saadi to the Defense Ministry.
The decision shocked Saadi and angered Iraqis, who rallied to support him on social media.

Being relegated to the sidelines is a “humiliation to my military history,” Saadi said in an interview with Iraqi TV channel iNews.

The decision has sparked allegations of a purge of officials seen as unfavourable to Iraq's Hashed al-Shaabi paramilitary force, which includes factions close to Tehran.
An Iraqi government official who requested anonymity said pro-Iran factions within the Hashed had "personally" lobbied for Saadi's removal.
"These groups were operating outside the state and the only barrier was the CTS," the official told AFP.
"The idea is to sideline him to bring somebody close to Iran and no longer have the CTS as a check."
Political commentator Ghaleb al-Shabandar said the move was "the beginning of the Iraqi army's dismantling and handover to the Hashed and other armed groups"
Journalist Mustafa Habib walks us through in this thread:


Important thing is happening in #Iraq: In an unexpected move, PM Adil Abd Al-Mahdi today issued an order to take off all field military roles of General Abdul Wahab al-Saadi the most famous officer in the Iraqi security forces, who is popular & respected by the Iraqi people. (1) 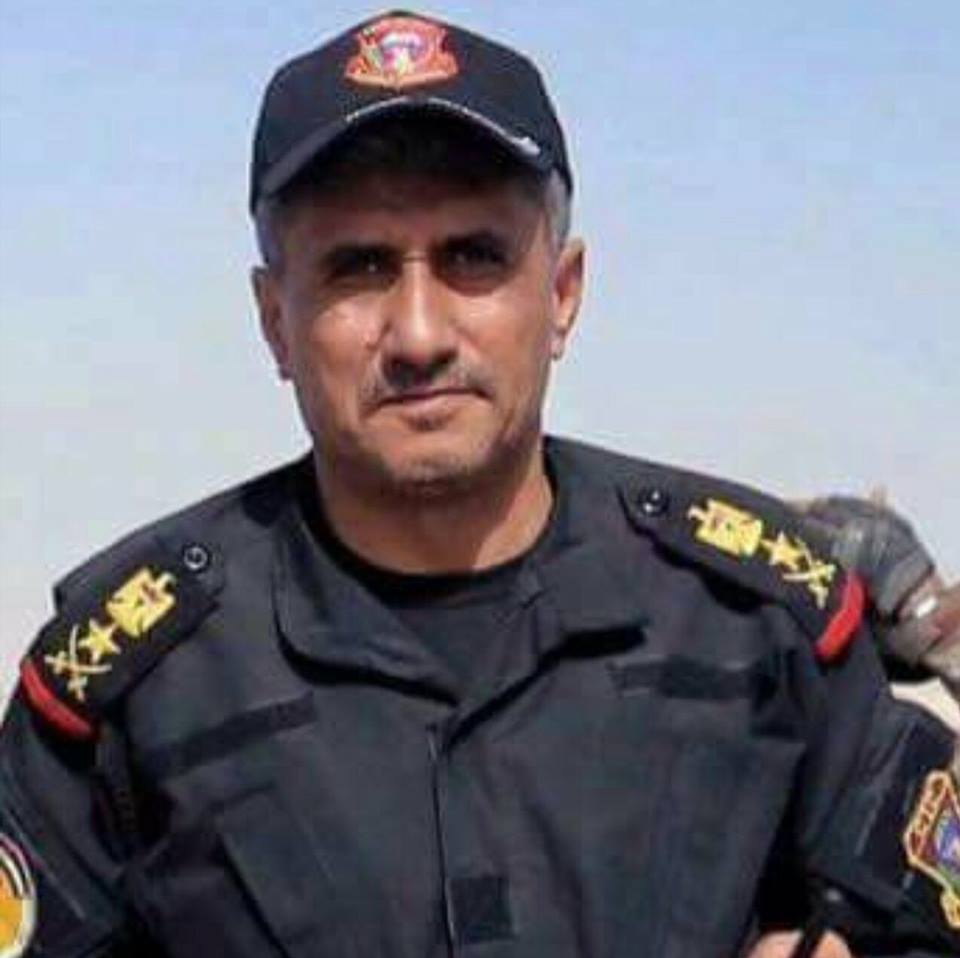 In unusual response, al-Saadi told local channel: "I told the PM that it an insult to me & to my military history, I will not implement it, I prefer to retire, the Parliament Speaker offered me a few months ago post of defense minister, but I refused because Im field soldier" (2)
/>
1:04
/>
1:04
1 reply9 retweets27 likes

Now, Iraqis have launched one of the biggest campaign on Twitter to rejected the Prime Minister's decision, support for Saadi, they put Hashtag: #كلنا_عبد_الوهاب_الساعدي (We are all Abdul Wahab Saadi) became the Trend in Iraq by tens of thousands of tweets just in few hours.(3) 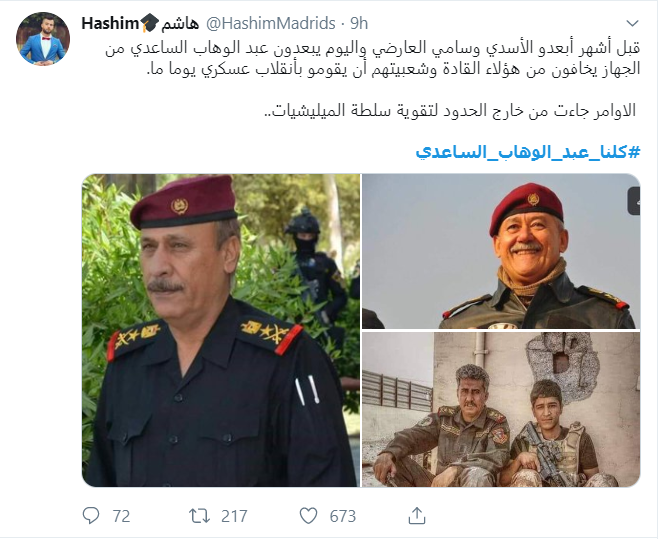 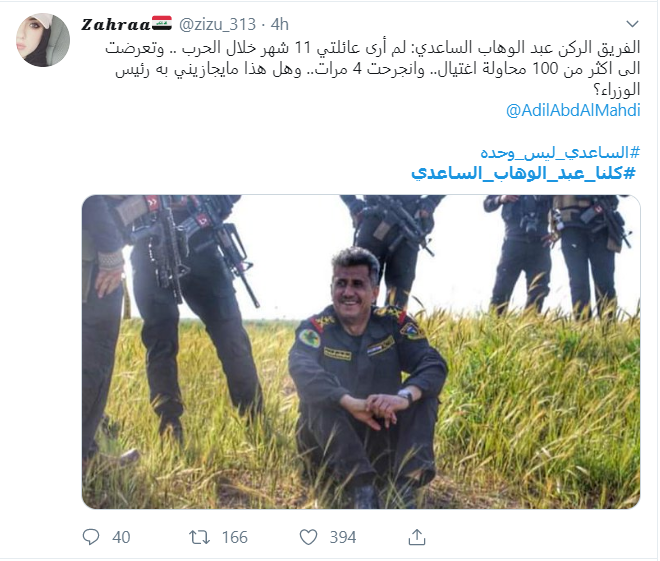 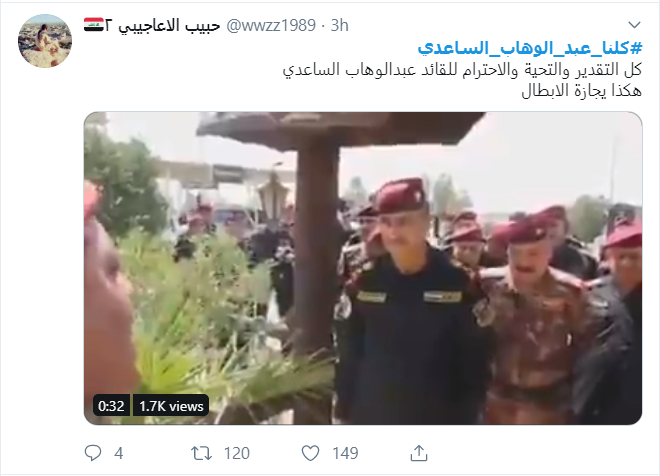 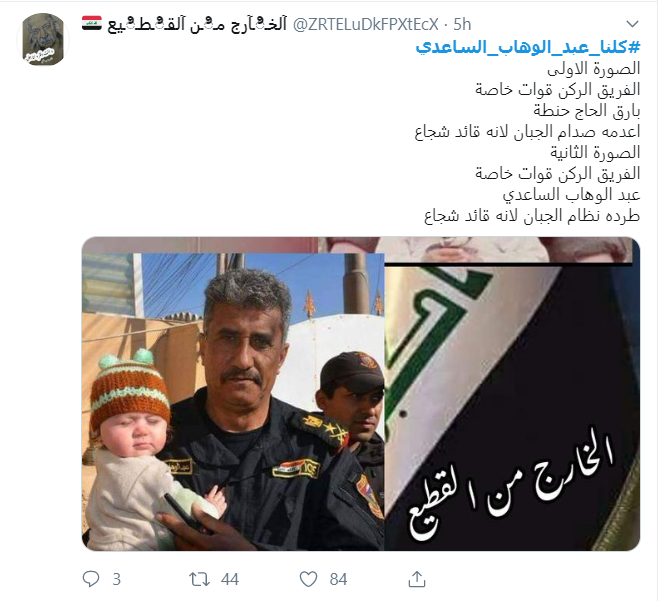 "Abu Fadl al-Abbas" faction leader Aws al-Khafaji who was pro-Iran but turned against them months ago then was arrested by PMF, also announces his support to Saadi, he says in tweet "there are more such decisions in the future" (4) 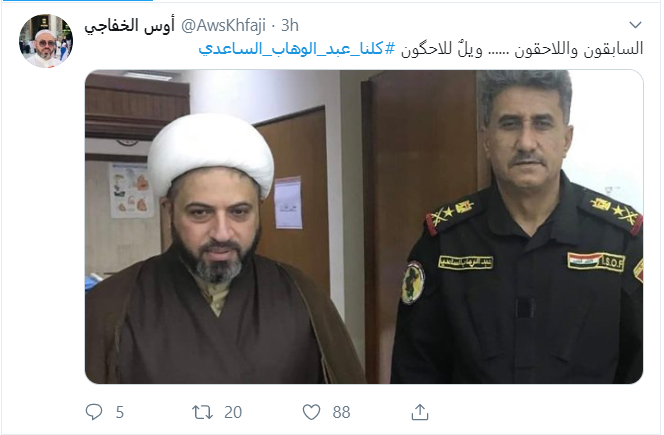 Here is the thing: the story goes back to April 2015 during battle 2 retake #Tikrit fom #ISIS, al-Saadi insisted 2 ask help Air strikes of the "Global Coalition" 2 reduce time&losses of battle, but the PMF especially Hadi Amiri refused & decided not participate in the battle(5)
1 reply5 retweets23 likes

But former PM al-Abadi decided to continue the battle without PMF, he support Saadi's plan to ask help of the "Global Coalition" Air strikes, the battle ended with the army's victory in just 3 weeks, then the PMF enter the city & all we know the story: (6)
1 reply6 retweets21 likes

After that, the PMF felt its reputation become bad and the army's popularity has risen for the first time since its collapse in #Mosul in 2014. Since the battle of Tikrit, the dispute began, some factions close to Iran have accused Saadi of being an American agent! (7)
1 reply4 retweets17 likes

After the battles of Tikrit, Fallujah & Ramadi, Saadi's popularity rose, when the battle of #Mosul began, Mosul residents knew him well & felt comfortable with his participation This is popular footage among Iraqis during Mosul battle, a little girl looking for Saadi to hug him:
/>
1:33
3 replies12 retweets44 likes

Saadi on his Facebook page, post this within a few hours ago: "Tell those who are waiting for our fall that our stand in battlefields under enemy fire longer than their age" "I am proud of your stand with me. I promise I won't let you down"

Mustafa Habib‏ @Mustafa_Habib33
Breaking: PM Abd Al-Mahdi in the first public comment on the removal of Saadi: "The decision is irreversible, use the media & social M by Saadi in his objection is big mistake and unacceptable", also the PM hints to accusation that Saadi visiting foreign embassies.
2:40 AM - 29 Sep 2019
1 reply7 retweets5 likes

Breaking: Big protests in #Mosul against the decision to remove General Abdul Wahab al-Saadi. The Sunni city defending a Shiite officer from the south of the country. Remarkable #Iraq
1 reply59 retweets90 likes