Racist Marcy Wheeler is pissed that Aaron Mate is cute

I always just thought Marcy Wheeler was an ugly White bitch.  I mean, look at her.

Who knew she was even uglier on the inside?


Here she is distorting Aaron Matte.  She's "done" -- she says.  Done?  She's dead.  No one gives a f**k about her except uptight bitches who hate African-Americans.  She's always there, where the racists are.  In fact, she should sing that, "Where The Racists Are" -- she's such a little Connie Francis. 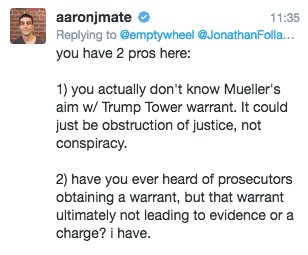 If you ask me, she went on attack because Aaron's cuter than she is.

Poor bitter racist Marcy when she was doing the work of the CIA with Valerie Plame, she thought she was going to amount to something but she never did.  A lonely and pathetic life.

Aaron's a journalist and Marcy is a little whore who outs her own sources.

Well, what can you expect from a racist like Marcy?


In an age of never-ending wars, many look away.  US Army Maj Danny Sjursen (ICH) argues that we have a responsibility not to turn away:

Why scream about the questionable value of training the army of Niger; about shattering all sense of security through regime change in Libya; about why air strikes and SOF raids never seem to stabilize Somalia; about the tinderbox of catastrophe that is Syria; about the way an Anti-American warlord was just swept to power in Iraq; or about the way hundreds of drone strikes in Pakistan have soured an entire people against Americans for at least a generation? The uncomfortable fact is that: We. Don’t. Care.
Yet there’s really no excuse. Thing is, we’ve got an obligation to care, we being citizens in an ostensibly free country and all. Everything the US government does overseas, every special forces raid, every bomb sold, every refueling mission completed and every drone strike executed, is done in our name.
Make no mistake: the people under all those U.S.-dropped, sold, or supported bombs know full well that America is involved, complicit even. From West Africa to South Asia, the ongoing (is it time to admit it’s never-ending?) US war-on-terror or whatever we’re calling it now, kills, maims, and traumatizes others and occasionally still sacrifices our own men and women. That most of this occurs in towns and villages that the dead soldiers’ families can’t pronounce or locate on a map is instructive. Fact: perpetual war is a disease to democracy that generates the apathy and numbness we should all be ashamed of.

Shame on us all. On me for trudging through the villages and neighborhoods of Iraq and Afghanistan without measurably improving security; on our congressional leaders for turning a blind eye while one president after another expands the scope of several undeclared wars; on, most importantly, all of us for the mixture of apathy and numbness infecting our entire public space.


If the truth is too much for you, you can clutch C.J. Chivers latest dump to your chest.  We warned you the book was war pornography.  If you're still doubting, note this rave from THE ECONOMIST:

The Economist‏Verified account @TheEconomist 34m34 minutes ago
He captures the idealism of volunteers, the exhilaration of killing for the first time and the disorientation of returning home
3 replies9 retweets22 likes

"He captures the idealism of volunteers, the exhilaration of killing for the first time and the disorientation of returning home"


Iraq has been destroyed by the war, not improved.  The people's lives are destroyed year after year.  That's why protests are yet again taking place in Iraq.


Some 22.6 per cent of 15-29-year-olds in Iraq are unemployed, the majority are women, the Ministry of Planning revealed today.
“The rate of unemployment among young people between the ages of 15 and 29 is 22.6 per cent, 56.3 per cent of whom are women,” the ministry’s central statistics agency said in a statement seen by the Anadolu Agency.
“The rate of youth participation in the labour force is 36.1 per cent,” the agency added.


In May the International Monetary Fund (IMF) said that Iraq’s youth unemployment rate had reached more than 40 per cent.


There are no jobs.  There is corruption in the government -- the US installed government.  Politicians and officials get rich and the Iraqi people suffer.  Jobs, basic services, they do without.


If anyone is wondering why there are anti-corruption protests in Iraq, especially when Iraq appeared to be on a successful road to recovery, this video shows one of the reasons. This is the water that the gov delivers to the oil-rich province of #Basra.#IraqProtests #العراق_ينتفض
0:38
91 views
0 replies2 retweets2 likes

Duaa Malik‏ @Duaa_IQ 22h22 hours ago
An emergency room doctor in Basra stated, “hospitals are receiving an unprecedented number of poison cases caused by polluted water delivered to residents.” She described the situation as unjust, adding “a popular revolution is the only solution.” #IraqProtests #العراق_ينتفض
0 replies5 retweets7 likes


In July 2018, protesters in Iraq were met with lethal force by the authorities during a series of protests, according to the Gulf Centre for Human Rights (GCHR) and other sources.
Protesters had gathered in a number of Iraqi cities to demand improved access to clean drinking water, reduced unemployment rate and increased access to electricity. The protests were reported in the Governorates of Basra, Karbala, Najaf, Muthanna, Maysan, Qadisiyyah, Thi Qar, and Babil.
At least 13 deaths, 269 injuries and 757 detentions resulted from the violent crackdown on protesters by the authorities. According to reports, the authorities used water cannons, tear gas and on several occasions live ammunition to disperse peaceful demonstrations. Some detainees were released only on condition that they sign a pledge not to demonstrate again.

Hayder al-Abadi is the one who turned the forces lose on the protesters.  He is the prime minister.  Or he claims to be.  His term should have ended in May.

He came in third.

It will soon be September 12th (20 days) and Iraq has still not formed a new government.  May 12th they held elections?  Some day, they may have a government.

Edward Yeranian‏ @Beybey1 11m11 minutes ago
Edward Yeranian Retweeted Alexandra De Corato
And @AlArabiya TV reported that Qassem Suleimani has been trying to drive a wedge between the various #Iraq political factions and prevent agreement over who will be PM.
Edward Yeranian added,
Alexandra De Corato @A_De_Corato
#Iraq's economy is so closely linked to #Iran that Baghdad is going to ask Washington for permission to ignore some U.S. sanctions on its neighbour, Iraqi government and central bank officials said. uk.reuters.com/article/uk-ira…
0 replies0 retweets0 likes


Suleimani is closest to the militias and they came in second in the elections.  Kosar Nawzad (KURDISTAN 24) reports:

A leader in the Fatih Alliance called for a change in Iraq’s system of government, from a parliamentary one to a presidential system, claiming this step would “save the country” from arbitrary allocations of posts and corruption.
Qais al-Khazali, leader of the Asaib Ahl al-Haq faction in the Iran-backed Hashd al-Shaabi, known in English as the Popular Mobilization Forces (PMF), shared his observations on Wednesday. His militia group is among the most powerful ones in Iraq.

“There are no real solutions with a parliamentary system that governs the country by quota, and the situation will continue to lead to corruption and misconduct because the regime operates on a quota system,” Khazali wrote on his Twitter account.

First place in the elections?  It went to Moqtada al-Sadr's bloc.  He is the Shi'ite cleric and movement leader.

Harry Istepanian‏ @HarryIstepanian Aug 19
Amid US Embassy announcement of maximum travel warning to Iraq, the Sa'eeroon alliance, backed by the leader of the Sadrist movement Moqtada al-Sadr, on Sunday, formed alliance of the largest bloc with Hikma, Wataniya and Nasir, to form the next government.
3 replies1 retweet4 likes

AnselmePascalDARIEN‏ @sharpeaglesight 3h3 hours ago
"The delegations consist of Nouri al-Maliki’s State of Law and Muqtada al-Sadr’s Sairoon. Both coalitions are vying to enter a deal with the two leading parties in the Kurdistan Region,
0 replies0 retweets0 likes 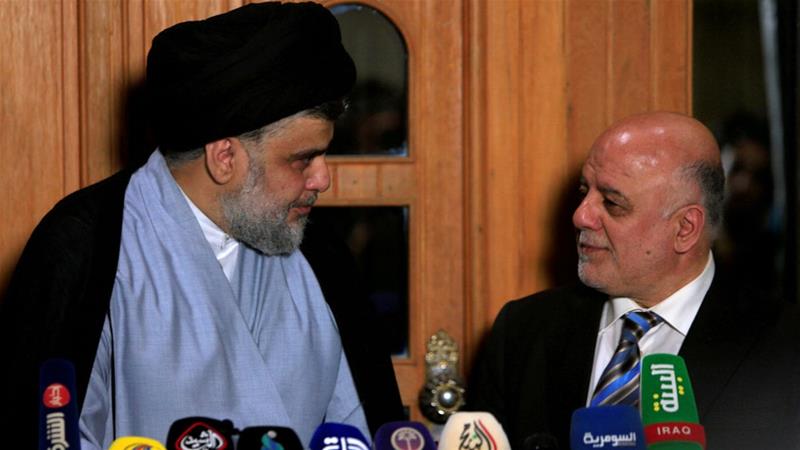 
The following community sites -- plus Jody Watley and the ACLU -- updated:

SICKOFITRADLZ
The new Ken Starr
7 hours ago
Posted by Marcia at 8:52 PM