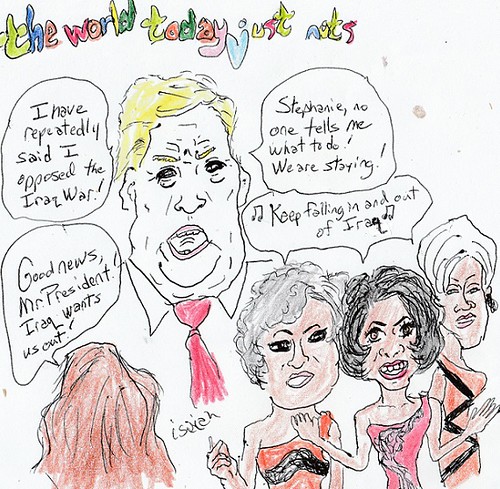 That's Isaiah's THE WORLD TODAY JUST NUTS "Keep Falling In And Out Of Iraq" which went up Sunday.  Sunday also saw . . .


Batwoman return on The CW. It was a great episode. There was a lot of action including a thrilling opening sequence. Some police officer irritated her. He's a calendar model. In an initial encounter, he helped her and the press acted like they were having a romance. That ticked Kate off. It was pointed out to her that Batwoman is thought to be straight. This became an issue when Alice held a high school dance hostage. There was a woman there, actually a young woman, who was struggling because her ex outed her to her family. That prompted the girl to make a silly threat which is how Batwoman first met her. So in the first meeting, she explained what happened to Batwoman and said Batwoman would never understand.

But Alice faked Kate out. Her sister didn't have the detonator, Mouse did. He hit the button and everything exploded. Batwoman managed to save people. Including that cop who was a model. When she stood (she'd used her cape to shield him from the flames), everyone started chanting "Kiss! Kiss! Kiss!" and he moved in to kiss her and she held her hand up to stop him and told him "no."

Alice is arrested and handcuffed and Sofia's enjoying that. Jacob, Kate's husband and Sofia's boss, remains in custody and remains accused of killing his wife. Mary (Kate's half-sister -- they share a father) is going crazy trying to line up someone who could testify that Mouse could wear a lifelike mask to impersonate Jacob and kill his wife (her mother). But no one wants to stick their neck out for Jacob.

Back to Batwoman refusing to kiss the man, so then it became news -- via Rachel Maddow's annoying character (she's like the voice over in Gossip Girl but she's snide and mean and speaking on the air because she's a radio shock jock) -- that Batwoman was a lesbian. And Rachel's character went on about how do we need this? Why do we need to know it? What happened to privacy? Batwoman knew it was the right thing to do. It was a good episode but there's a SHOCKER I haven't gotten to. Stop reading unless you want to know.

So Batwoman, or Kate, I should say, she wasn't in costume. So Kate's at her office and is shocked when Beth walks in. Beth's hair is darker, maybe even red. Kate grabs her and slams her against the desk asking her what she's doing there? Because, remember, Alice/Beth is in custody. Beth says she finished with college or something, just got back and wanted to see her sister. Is this for real? Is this really Beth? Mouse in a mask? Is it a Beth from another earth -- remember that in the crossover there was a Beth when Supergirl and Kate went to meet an alternate Bruce Wayne. That's how the show ended, with Kate shocked that her sister -- or someone posing as her -- was in front of her.

Monday, January 20, 2020.  What if you campaigned for the presidency and no one showed up at your scheduled events (poor Deval!), War Hawk Joe Biden remains a menace, protests continue in Iraq and at least one protester has been killed by security forces in Baghdad . . .

In the US, the race for the Democratic Party's presidential nomination continues.  In one of the more embarrassing moments, no one turns out for Governor Who.  Let's include Isaiah's "Pro-rape Deval."


Maybe you forgot he was in the race, maybe you never knew but Governor Who is making as much of an impression nationally as he did when he was governor.  Pro-rape Deval Patrick had a campaign event.  Paul Duke's article (STEADFAST DAILY) e-mailed to the public e-mail account explains what happened next:   Patrick showed up at his scheduled event at Morehouse College in Atlanta only to discover only two students showed up for his event (and Duke says they were stopped in the hall and corralled in).  At that point, Deval cancelled the event.  Governor Who indeed.

And then there's War Hawk Joe.

Seriously tho How is Joe Biden really the Democratic frontrunner? He doesn't know where he is, he can barely speak, and he inappropriately touches women and girls
1,843 replies3,614 retweets19,580 likes

Joe is the choice of the corporate media and they prop him up.


At THE GUARDIAN,  Zephyr explains:

It looks like “Middle Class” Joe has perfected the art of taking big contributions, then representing his corporate donors at the cost of middle- and working-class Americans. Converting campaign contributions into legislative favors and policy positions isn’t being “moderate”. It is the kind of transactional politics Americans have come to loathe.
There are three clear examples.
First, Biden’s support for finance over working-class Americans. His career was bankrolled by the credit card industry. He delivered for it by spearheading a bankruptcy bill that made it harder for Americans to reduce their debts and helped cause the financial crisis. He not only authored and voted for that bill, he split with Barack Obama and led the battle to vote down Democratic amendments.

His explanations for carrying water for the credit card industry have changed over time. They have never rung true.
The simplest explanation is the most likely: he did it for his donors. At a fundraiser last year, Biden promised his Wall Street donors that “nothing would fundamentally change” for them if he became president. Now the financial world is raising huge money for his campaign. It clearly thinks he’s going to be its friend if elected. Most Americans, who get ripped off by the financial sector on a daily basis, aren’t looking for a candidate who has made their life harder.
Second, healthcare. On 25 April, the day he announced his campaign, Biden went straight to a fundraiser co-hosted by the chief executive of a major health insurance corporation. He refuses to sign a pledge to reject money from insurance and pharma execs and continues to raise money from healthcare industry donors. His campaign is being bankrolled by a super Pac run by healthcare lobbyists.
What did all these donors get? A healthcare proposal that preserves the power of the insurance industry and leaves 10 million Americans uninsured.


And, of course, there's Joe's decade long war against Social Security.  David Sirota deserves strong credit for getting this important news into the media cycle.


Joe Biden wasn’t being sarcastic — pass it on

This video now has 1 million views

If Biden refuses to acknowledge his past positions on Social Security and explain how he has changed his views then he deserves all the wrath that Sanders and others can dump on him. It is that simple.
6 replies132 retweets343 likes


. . . where the months long protests continue this morning.  ALJAZEERA reports:

Security forces have fired tear gas and live fire in an attempt to clear roads in Iraq's capital, Baghdad, as hundreds of protesters again took to the streets to express their anger at the embattled government's slow pace of reforms.
Demonstrators a week ago had given the government until Monday to act on their demands, which include the holding of a snap poll under a new electoral law, the appointment of an independent prime minister and the prosecution of officials suspected of corruption.
Starting on Sunday and continuing on Monday, young demonstrators in Baghdad and the south began sealing off highways and bridges with burning tyres.
"We blocked the road to demand our rights ... the rights of young people to get a job," said one of the protesters in the capital, who wished to remain anonymous.

"We demand the central government go to early elections and the nomination of a new independent prime minister. If that doesn't happen, we will escalate and block all the highway and centres of the city."

The response?  ALJAZEERA's Imran Khan notes that the security forces are firing bullets into the crowd and at least one protestor has been killed.

Tear gas near #Baghdad's Tiyaran square today as security forces try to push back protestors from the highway. A 21-year-old protestor dead after being shot by #Iraqi security forces. With no movement on new government, protests escalating. Photo by @npr Ahmed Qusay. 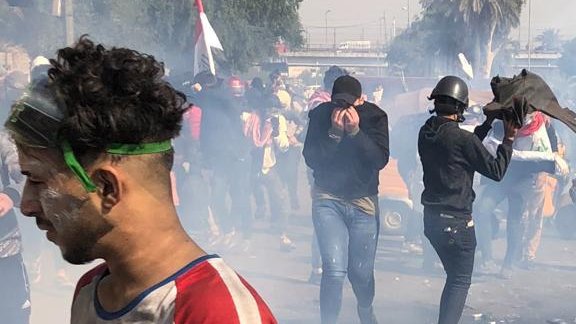 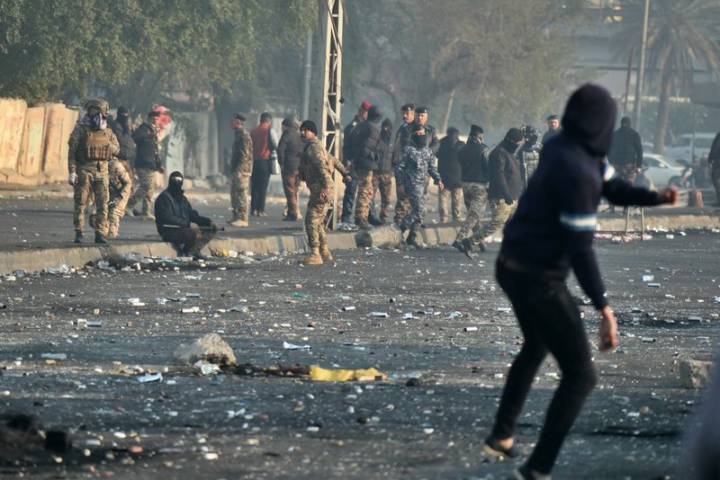 What are they demanding?  It's right there in the report above.  So let's note the whore that's waddling his fat ass into the discussion.  Ladies and gentlemen, the one, the only  Raed Jarrar.

While some corrupt politicians and militias try to hijack the protest movement in #Iraq, Iraqis in #Baghdad, #Nasiriyah, and other cities took to the streets to protest all foreign interventions, including those of the #US and #Iran.
/>

Yes, Iraqis want both US and Iran troops out -- actually, they want all foreign troops out which does include Turkish troops though no one wants to hear Iraq when they make that last call.

To be fair to Raed, whom I don't care for, I did go through his Tweets, this morning.  He never notes -- going back a month -- the demands of the Iraqi people who are protesting.  He notes the issue of Iraq and US troops.  That's why Raed really isn't the person to speak to this issue though, it turns out, PACIFICA is again making him the go to.  There are many reasons that is a problem but you can refer to 2013's "Media: The Collapse of Indymedia and its Queen."  I will give Raed credit for not falling into the 'St. Soleimani was killed!' crowd.  That's not a minor point if you remember how high the crazy was cranked by a number of loud voices on that issue.

Raed wants US troops out of Iraq.  I do as well.  My wants and my desires do not allow me to reduce a months long protest and its goals to one issue, especially when it isn't the primary issue.

You have many Iraqis on Arabic social media, Iraqis who protest, who are very nervous about this Friday.  Shi'ite cleric and movement leader Moqtada al-Sadr has called for Friday's protest to be about expelling foreign troops.  They're not wanting to be hijacked by Moqtada.  Some of that is starting to bubble up in the media.  Gareth Browne (ALJAZEERA) notes:

Many of the people in Baghdad’s Tahrir Square are deeply sceptical of Sadr’s motives, fearing he may attempt to hijack the popular protest movement for his own gain.

“I will die before I march behind his banner. I have been here for three months, sleeping in the cold, facing danger - I did not do that for him,” he added.

“He [Sadr] will try to wipe us off the map, if the Sadrists come to Tahrir, we will fight back,” warned Hamoud Ali, 32.

The U.N. envoy to Iraq, meanwhile, urged Iraqi political elites to resume pushing for reforms and for protests to remain peaceful.
“Any steps taken so far to address the people's concerns will remain hollow, if they are not completed,” said Jeanine Hennis-Plasschaert in a statement issued by the U.N. “Violent suppression of peaceful protesters is intolerable and must be avoided at all costs. Nothing is more damaging than a climate of fear.”

In the southern city of Nasiriyah, protesters blocked the highway linking the city to the southern oil-rich province of Basra. At least six protesters were wounded when an unknown gunmen fired at them from a speeding car, a medical official said. All officials spoke on condition of anonymity under regulations.

Disheartening reports that security forces once again meet protesters with violence in #Baghdad. It is the right of every #Iraqi to be allowed to protest peacefully. It is the duty of Iraqi security forces to protect that right. #العراق_ينتفض #بغداد 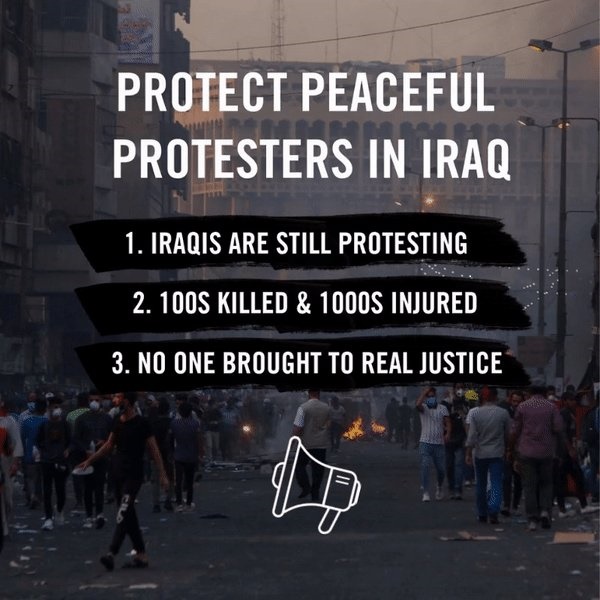 
Isaiah's THE WORLD TODAY JUST NUTS "Keep Falling In And Out Of Iraq" went up last night.  New content at THIRD: