ronald rosales‏ @ronaldrosales4 13h13 hours ago
http://a.msn.com/01/en-us/BBZdKdu?ocid=st … CRYING is about more 2 come when HUNTER goes to COURT BY BY
0 replies0 retweets0 likes

He cray-cray in the bad way.

And his son is a deadbeat dad who should be locked away.

Joe needs to drop out of the race.  We need Bernie.

Wednesday, January 22, 2020.  Hillary Clinton disgraces herself yet again, Bernie Sanders surges in the polls, more US personnel are announced wounded from the January 8th Iranian attack, Iraqis continue to protest and more.

In her latest stunt, Hillary's rushed to THE HOLLYWOOD REPORTER to insist that Bernie has no friends and no one likes him and he's accomplished nothing.

How do you manage that?  No one thought it was possible in the corporate press.  But Hillary did it, she ran such a lousy campaign that Donald Trump is now president.

Despite that, Hillary wants to make like Joan Crawford calling up Hedda Hopper to dish, "I was proud to be part of this industry when Marilyn ]Monroe] was fired. I don't think she has a friend. She hasn't taken the time to make a friend in this industry."

All over the net you'll find various self-appointed spokespersons insisting that whomever the nominee is, the nominee must be supported come November so that Donald Trump doesn't get four more years.  And along comes Hillary.

How does this help party unity?

She's a loser and she has no reason to speak at the next convention.  That was before her remarks.  Now that she's made them, she really does need to be shunned.  You can't imagine a comment like that in 1992 by Michael Dukakis or in the 1988 by Walter Mondale.  When they lost the presidential election, neither felt the need to trash anyone running for the nomination after them.

But there's Hillary just being a total bitch and a total unprofessional.

Reading the write ups, you really have to wonder if she was drunk when she spoke to the press.

Bernie could be the nominee.  If not, he might end up the running mate.  Mayor Pete, for example, might be smarter than Hillary was in 2016 and might make the offer so that he could benefit from the massive support Bernie does have.  (I'm just Pete as an example.)

If that happens, what about Hillary's nonsense?  How does that bitchery help the party in the general election?

Now I'm sure I've said worse and just as bad.  But I'm not a party leader.  I'm not someone who's supposed to big tent it and bring us all together.  I'm a critic, that's my role.

That's not supposed to be Hillary's role.  Having failed to win the last presidential election, her role is Vanna White.  Just stand there smiling and applauding everyone as they spin the wheel.  Big money, big money!

Let's get to the really important part of what's happening: History.

Hillary is the first woman to be the presidential nominee of a major party.  That often excuses a lot.  That will not excuse this and someone needs to pull Hillary aside and talk about the damage she's doing.

What do we hear from students as we speak around the country when Hillary's name comes up?

That she's a loser and a failure.  Which she is.  And that's she's a poor sport who can't accept losing.  Which is also true.  She has blamed everyone for her pathetic campaign while taking none of the blame herself.

Let's review just a little of her failures from 2016.  Your fat ass doesn't need to be home and in your own bed every damn night.  You want to be president, get off your lazy ass and work for it.  Nope, not in 2016.  Hillary couldn't be bothered with traveling to all the states here on the mainland.  Nope. Her other big mistake: Celebrity worship!

She ran a lousy campaign wanting people to insist "I'm with her!"

Part of the problem appears to be that Hillary has mistaken herself for a celebrity and not a politician.  Maybe that comes from all the years of being First Lady -- first in Arkansas, later in DC.  She relied on celebrity during all that time.  It doesn't appear that she's ever grasped political power.

Regardless, she's a poor sport.

That is a poor sport.  Now, in an election year, she's making bitchy remarks about one of the leading candidates in her own party.

This is all shameful.  It's harming whatever legacy she had and it's making women look bad.

It's making, for example, it look like women can't handle losing.

She suffers in silence with regards to that but she's going to come forward to rip apart a possible presidential nominee of her own party?

Is she trying to re-elect Donald Trump?

As for her b.s. about Bernie.  He has friends.  Clearly people like him.  And as for accomplishing nothing, if he gets the nomination and wins, I want the camera in a tight close up on Hillary's smug, little face.  That's one more reason to support Bernie, to show Hillary that someone willing to work for the votes can defeat Donald Trump.

Hillary has shamed herself with her behavior.  It's appalling and makes her look like an even bigger loser than she did before.

Bitter Hillary, Queen of the Sour Grape Girls.  Each day, she's a little more forgotten, each day she deals with the reality that she's not a she-ro.  Young women look to Ruth Bader Ginsburg when they look for inspiration and strength.  In terms of former First Ladies, Michelle Obama's replaced Hillary's long standing grip as most admired by the masses who don't pay attention to politics.  (GALLUP is not a real poll, it's about name recognition.)  As she grapples with the fact that each day she's less and less relevant, it apparently requires her to pull stunts like trashing Bernie to THE HOLLYWOOD REPORTER in a desperate bid to get some attention.

Shame on her.   She really needs to step aside now.  She lost the 2016 election.  It's now 2020, she needs to stop trying to hog the limelight.  With her recent stunt, she's gone from distraction to outright liability. 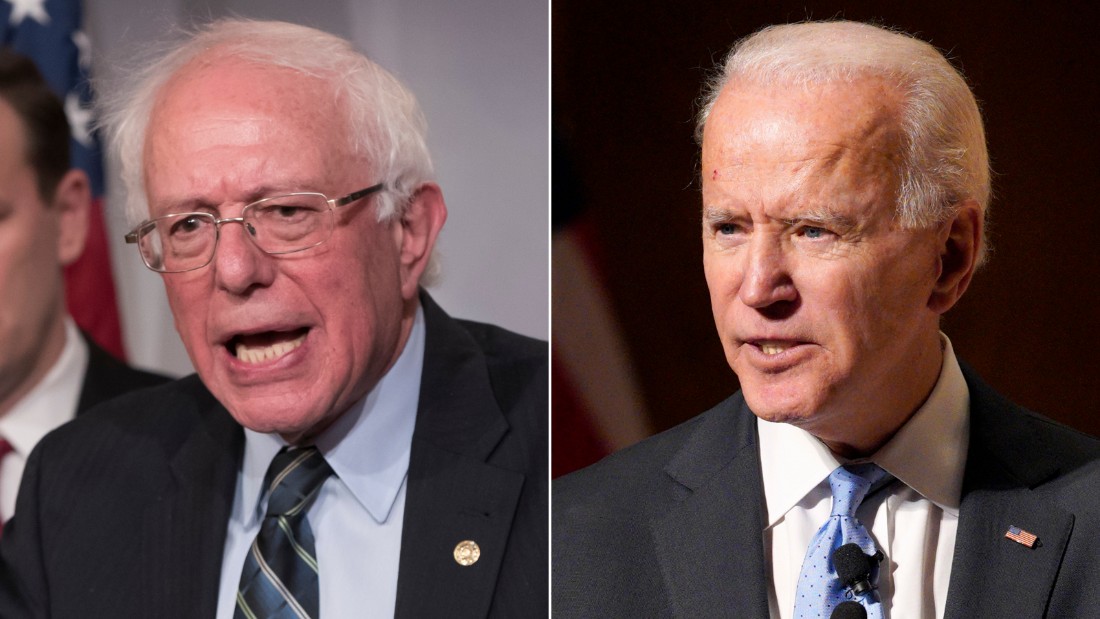 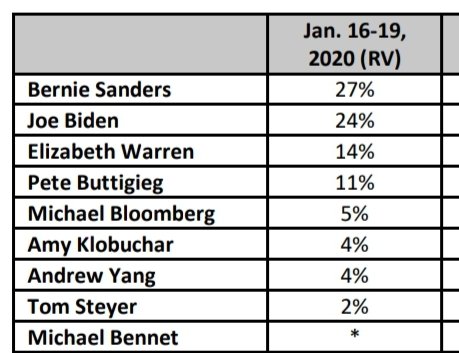 Sanders holds four-point lead on Biden in new California pollSen. Bernie Sanders (I-Vt.) is leading the crowded Democratic primary field in California, according to a new poll from the University of Southern California's Rossier School of…
thehill.com

Dear Twitter folk: I don’t care how many insults you or Joe Biden hurl at me or anyone else. We’re not backing down. Democratic voters deserve to see this video to know how many times Biden tried to slash Social Security. #BidenSocialSecurityCuts


Here’s Joe Biden on the Senate Floor bragging about all the times he’s tried to cut Social Security.
/>

Just to be clear folks, Joe Biden's got a decades long track record of contemplating cuts to Social Security. No one needs to rely on a contested 2018 statement to make this case. I wrote about it here:
173 replies2,785 retweets6,779 likes

Joe Biden accused Bernie Sanders’ campaign of issuing a “doctored video” to attack him over Social Security, a false claim that ratcheted up the tension between the two campaigns
436 replies742 retweets2,394 likes

While Joe Biden has a 40-year record advocating to cut Social Security, Bernie Sanders has led the effort to prevent these cuts from happening & to expand Social Security. That's 1 reason why Bernie's the best candidate to defeat Trump & why Biden is not. washingtontimes.com/news/2018/sep/…
54 replies983 retweets3,000 likes

Turning to Iraq, earlier this month, the government of Iran launched a missile attack on a base in Iraq with US troops.  The Twitter reaction of so many deranged lunatics was, "See, Iran doesn't harm people!  It did a precision strike!"  No, Margret, no Aaron, no Michael, just no.  There is no such thing as a 'smart weapon' and if strikes have made anything clear over the year, there's no precision strike.  You have become as bad as the weapon makers.  Last week, the world warned that some US troops had been injured in the strike.  Now we're learning that even more have been.  Lolita Baldor and Robert Burns (AP) report:


Additional U.S. troops have been flown out of Iraq for closer evaluation of potential concussion injuries from the Iranian missile attack of Jan. 8, U.S. defense officials said Tuesday.
The exact number of troops flown to Germany was not immediately clear, but officials said it was a small number. The officials spoke on condition of anonymity because some details were still being sorted out. Last week, 11 U.S. service members were flown from Iraq to U.S. medical facilities in Germany and Kuwait for further evaluation of concussion-like symptoms.


Navy Capt. Bill Urban, spokesman for U.S. Central Command, which oversees military operations across the Middle East, confirmed the additional evacuations but did not say how many were included.


SOCIAL OBSERVER notes this morning the deaths of 10 protesters in Iraq in the last 24 hour cycle and:

According to the commission [National High Commission for Human Rights], the security forces have detained more than 88 protesters so far. These protesters blocked the main road in Baghdad, Basra, and Nasiriyah. According to local media reports, some unknown gunmen attacked three people in Basra. Security forces sealed the area and the injured were rushed to the hospital for treatment.
It is notable that hundreds of people have been killed and thousands have been injured in protests in Iraq since last October. People are demanding economic reform, better housing facilities and elimination of corruption.


Some are noting that security forces were hurt as well.  Yes, they were.  When they were attempting to kill the protesters, for example.  THE SENTINEL notes, "Two of the members of a military unit acting under the flag of Basra’s Operational Command were run over while firing on protesters who had blocked a roadway on Monday, a source inside the command told Efe news."

Iraqi protester is shot to death as security forces continue to use excessive force against anti-government demonstrations that have spread across the country. #iraq #IraqiRevolution #iraqprotests #Baghdad #IranVSAmerica #Protests meo.news/en/another-ira… 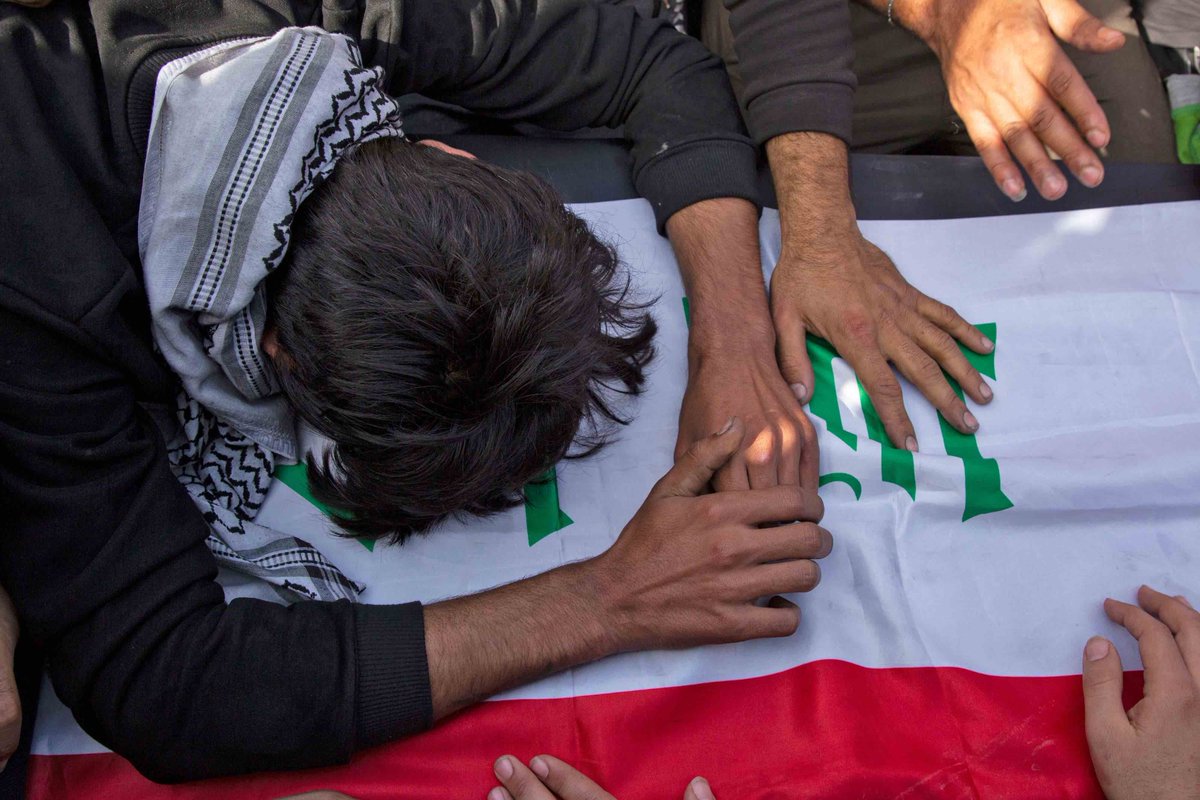 
More than 10 people were killed in two days of violent protests in Iraq, as protesters seek to maintain momentum in their calls for the government's resignation
/>


'AT LEAST five demonstrators have been killed in Baghdad, Karbala and Baqubah in Iraq as security forces opened fire on the mass protest of young people who have risen up demanding a complete overhaul of the political system.'
0 replies0 retweets0 likes

Replying to @farhad965 @janearraf and
What does all that mean in concrete terms I wonder...in the interests of Iraqi people and the current demands of protest movement - and the fact that unarmed civilian protestors are being purposefully murdered, maimed, terrorized, threatened, kidnapped - sons & daughters of Iraq
0 replies1 retweet1 like 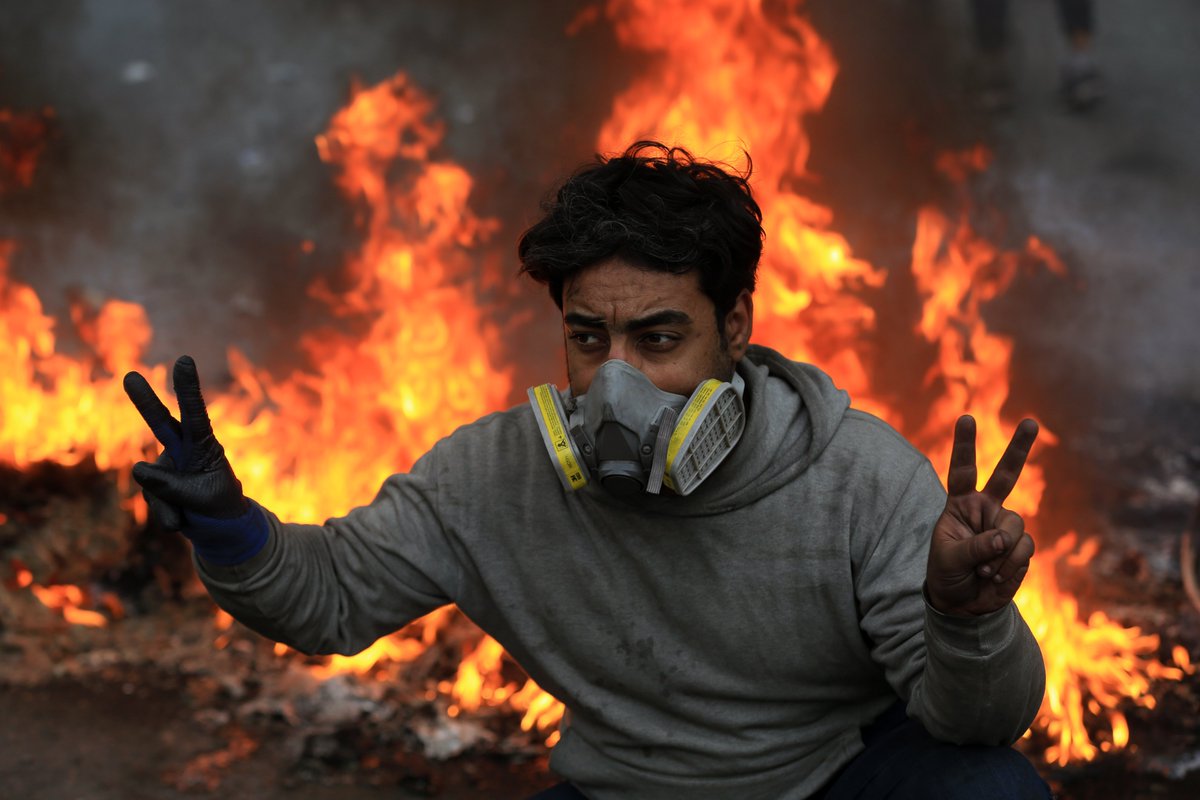 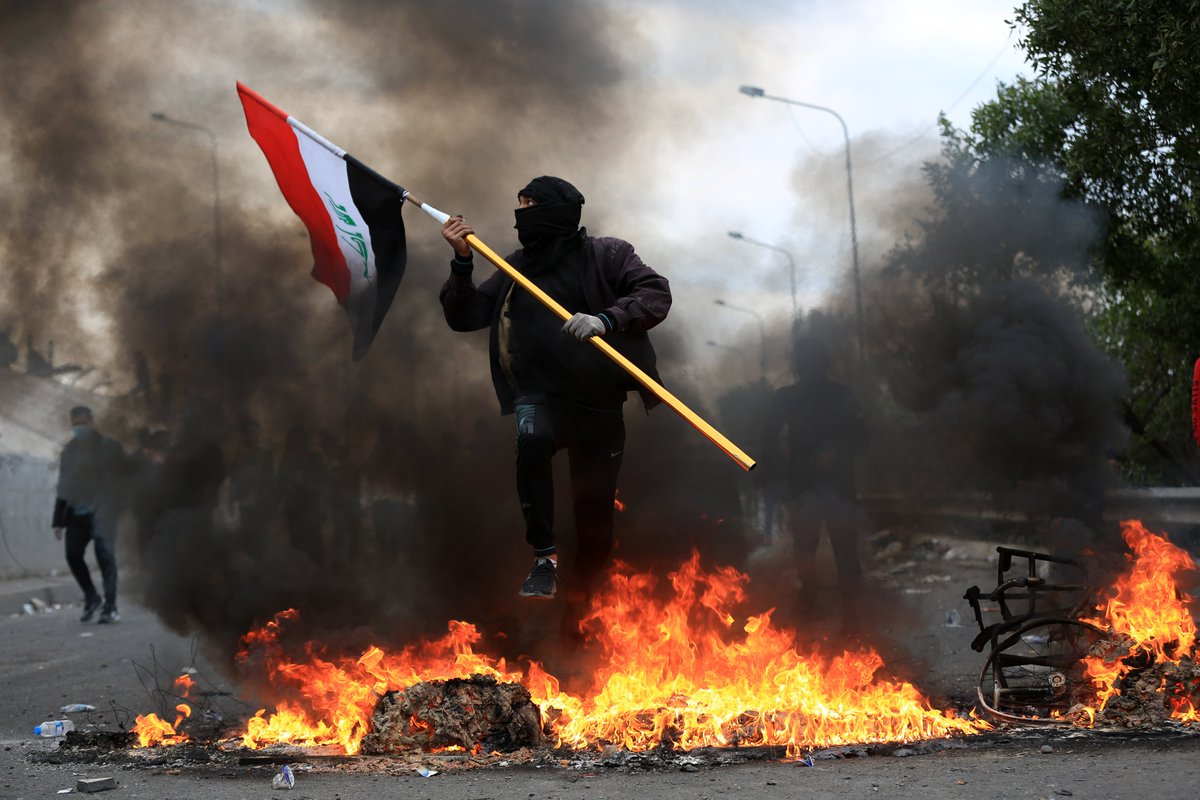 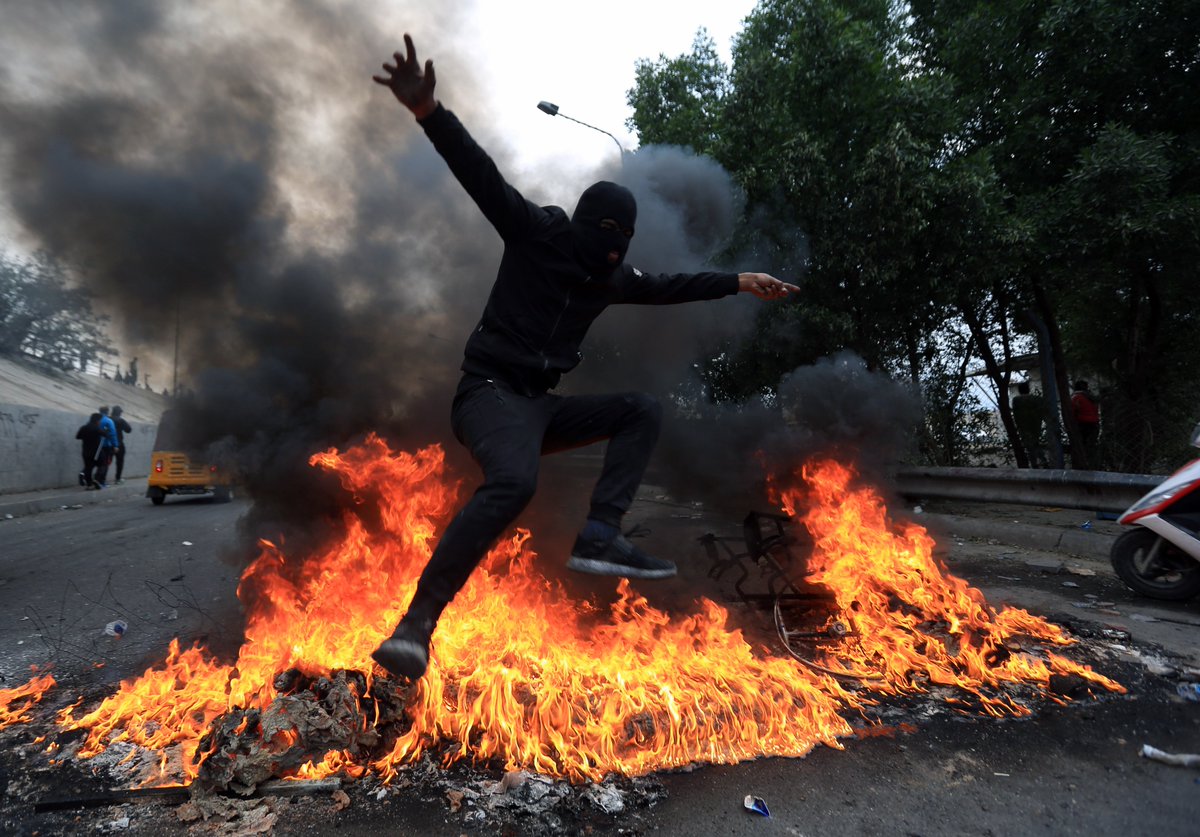 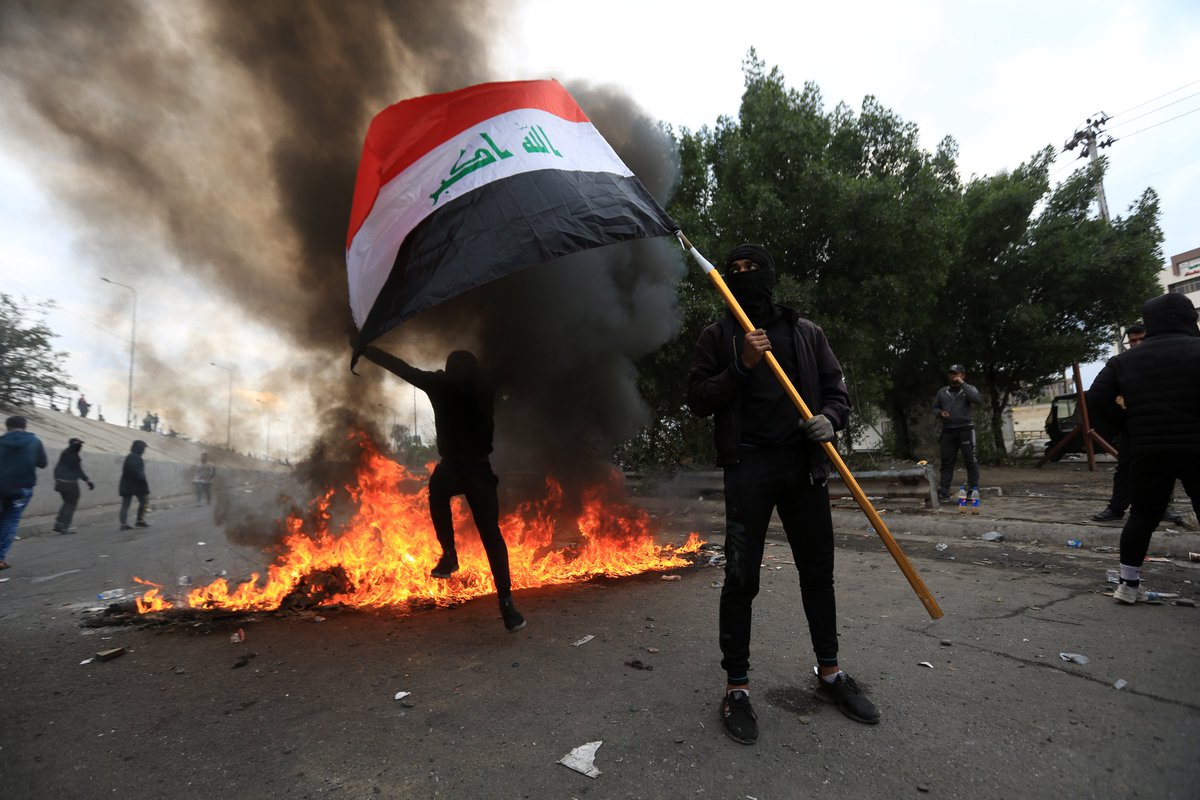 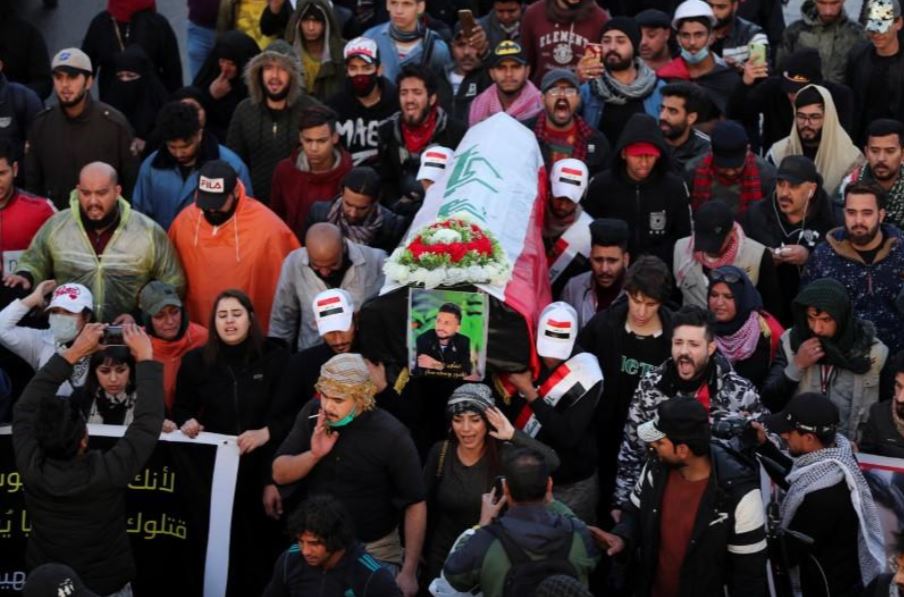 Last night protests in #Iraq escalated, resulting in dozens of people wounded and three casualties. One of them is #YousifSattar, a 21-year-old local journalist who was covering the protests in #Baghdad.
0 replies1 retweet1 like 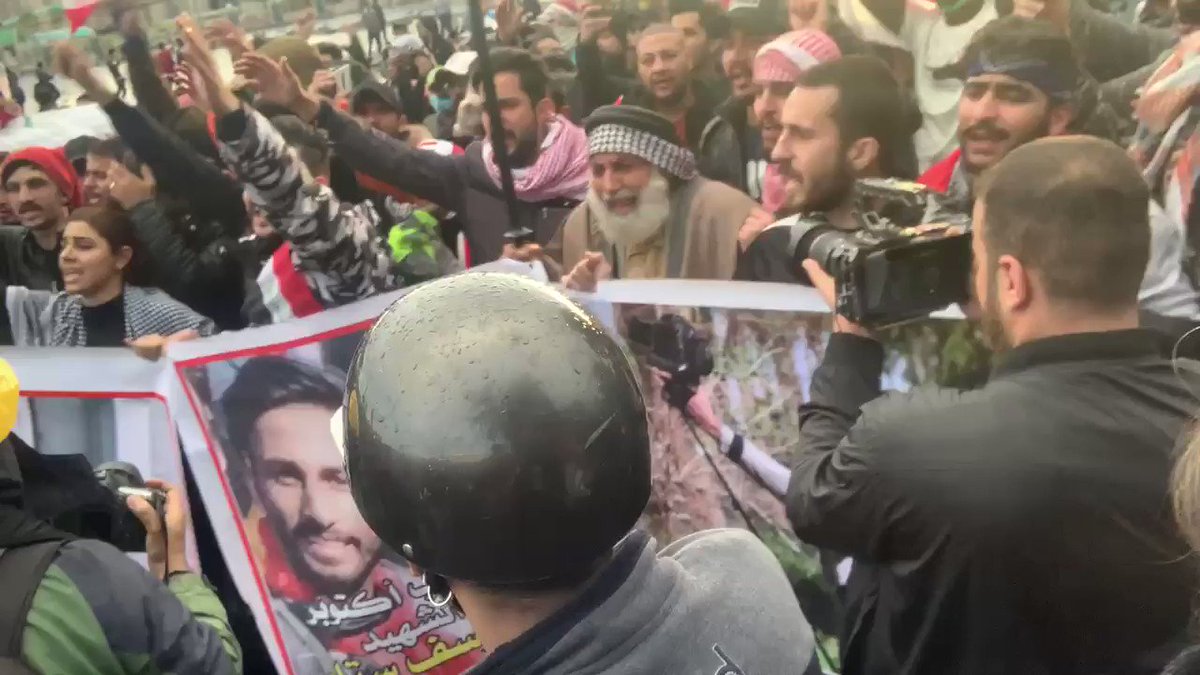