What the f**k happened to Patricia Arquette

So I see Angela Bassett and think, "Eh."  I love Angela but not really in the mood to see her play a mother who doubts her own worth as she settles into middle age. Sorry, Angela really needs strong parts.

I see Felicity Huffman and I don't hold her crime scandal against her but I've never been a big Felicity fan.

Then I see Celia Weston.  She's a lot fatter than she used to be and more wrinkled but she's 67 and we're all aging.  I like her. She's been good on everything -- even the TV show Alice -- but she was especially great in the comedy classic Flirting With Disaster.  Ben Stiller is looking for his birth parents.  Tea Leoni takes him to California where he meets his mother played by Celia but it turns out she's not really his mother.


So I'm thinking, "Okay, I'll watch THE OTHERHOOD."  It seems hokey -- three middle-aged women going to visit their sons who forgot them on Mother's Day -- but I like all three actress and Celia can be really funny.

Then it hits me, that's not Celia Weston.

How fat is Patricia Arquette?

Allowances I would make for Celia Heaton at 67, I will not make for 51-year-old Patricia Arquette.

She's as big as a house -- to steal from Ellen's TASTE THIS comedy routine.

Now she already had the teeth problem and she's always been a one-note actress.  Now she's huge.  Hopefully, that means some real actresses can get hired in her place I the future.

Tuesday, August 6, 2019.  Joe Biden continues to stumble along while Mosul remains a wreck.

In the US, the race is on for the Democratic Party's presidential nomination.  In two debates so far -- one in June and one in July -- former Vice President Joe Biden has struggled with his surroundings and recognizing them.  He continues to struggle.


Former Vice President Joe Biden misstated the locations of mass shootings in El Paso, Texas, and Dayton, Ohio, while speaking to donors at a high-dollar fundraiser in San Diego on Sunday night.
Biden, 76, mistakenly referred to the shootings as “the tragic events in Houston today and also in Michigan the day before," but later corrected himself, according to a pool report. Biden seemingly confused Houston for El Paso and Michigan for Ohio when speaking to donors about the shootings.

Last week during the Democratic presidential debate, Biden flubbed the address where people could send donations to his campaign.
“If you agree with me, go to Joe 30330 and help me in this fight,” Biden said in his closing remarks on stage Wednesday night.
His campaign corrected his blunder the next day.


Sorry, but if we hit Trump for calling the mass shooting in Dayton “Toledo,” we can’t let Joe Biden off the hook for calling El Paso and Ohio “Houston and Michigan.” He’s out of touch and past his prime, too.
494 replies1,157 retweets4,895 likes

Is Joe all there?  His response to shootings makes some wonder.


Joe Biden says that video games are part of the problem. “It is not healthy having these games teaching kids this dispassionate notion you can...blow their brains out,” he says. He adds, “It's not in and of itself why we have this climate."
5:41 PM - 5 Aug 2019
1,803 replies387 retweets1,386 likes

The way I heard this — with him starting by saying, “I’ve talked about it too” — he is saying that video games are *part of* the problem. But it’s not the only reason (“in and of itself”) we have mass shootings. Here’s the full clip, definitely worth watching:
Matt Viser added, 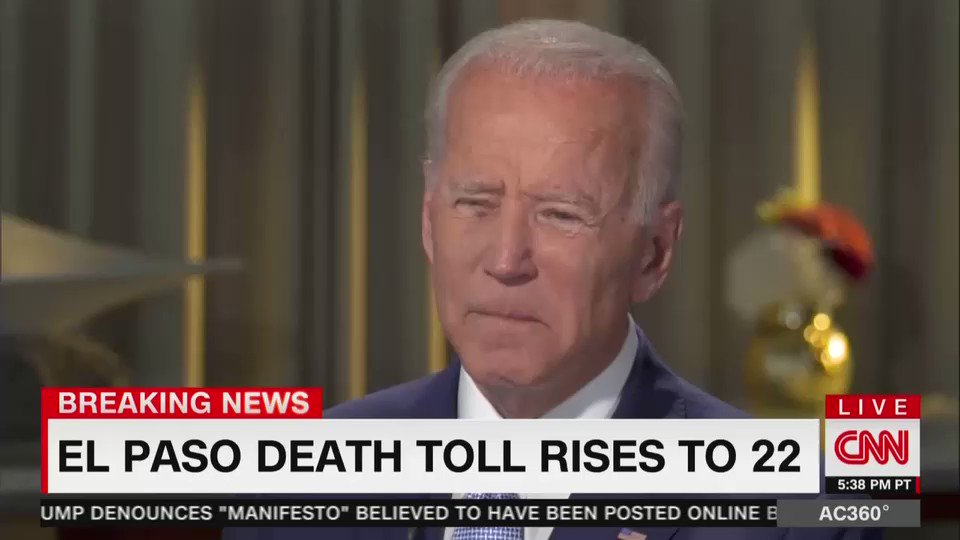 I don't know how anyone could be do bad at his after 8 years working with Obama. I mean, sure I can but was he playing tetris the whole time???
14 replies4 retweets85 likes

Biden was coasting on the accomplishments of the Black guy.  He’s always been bad at this. No idea why folks seem to have forgotten that.
8 replies3 retweets140 likes

Bc he was Obama's VP. That wiped out a lot of memories unfortunately.
2 replies2 retweets70 likes

Ugh. Look, I'm more than up for a conversation about the gaming COMMUNITY, which has tolerated racism and misogyny and served as a recruiting ground. But Biden is getting his talking points from the 90s, and it's weird and out of touch in a world of middle aged mom/dad gamers.
12 replies30 retweets434 likes

Regardless of his age, his views are very dated, and he doesn't seem open enough to criticism for that to change.

(Warren isn't much younger, but she has a different temperament.)
12 replies5 retweets215 likes

This old man crankiness about that new-fangled technology shows how out of touch Joe Biden is.
9 replies4 retweets206 likes

To be fair, a full 73% of the US gaming revenues are from the Lego franchise.
2 replies1 retweet24 likes

"What can I blame that will have no effect on how I live my life?"
0 replies1 retweet9 likes

Is Joe Lieberman gonna pop out from behind a bush soon? We’re back in the 90s
14 replies9 retweets240 likes

Tipper probably convinced me to make sure I got that 2 Live Crew tape. That movement also brought together Frank Zappa, John Denver, and Dee Snider, so kudos to them on that!
0 replies1 retweet41 likes

Why does Joe Biden not know when to shut up?? He had the same problem in 1988 & 2008. The problem is simple: Ban assault weapons like they were when he was in the Senate. Regulate video games?? Sounds like someone's old Grandma who hates cell phones. Don't pollute the narrative.
18 replies43 retweets188 likes

He rambles.  You can see it coming. The conversation takes on a whole other arc.
1 reply0 retweets7 likes

Yes. And it feeds into the GOP narrative of "not guns, but the internet." Classic Biden. It's been almost 12 years. People don't remember. They say "gaffes" as though it's just humorous. It's not. He's a terrible campaigner.
4 replies7 retweets21 likes

He thinks playing death and destruction is the problem.

Actual death and destruction -- like the Iraq War?  He doesn't see any correlation.  He wouldn't, would he?


Being addled minded is not Joe's only problem of late.  AP reports:

A federal lawsuit accuses the brother of former Vice President Joe Biden, hedge fund manager Michael Lewitt, and others of attempting to defraud a Tennessee business.

The Knoxville News Sentinel reports that the defendants have until mid-August to respond to the lawsuit filed last month by Michael Frey and Dr. Mohannad Azzam. It says the plaintiffs founded Diverse Medical Management to reform failing rural hospitals, and Jim Biden promised to sell the health care plan to investors.

One would think, therefore, that candidates angling to become the standard-bearer of the loyal opposition should be capable of articulating not only the danger of this political moment, but also how their own party helped create this tragedy. Democratic candidates will never be able to steer a fresh course so long as they continue decades of denial and dissemblance. Joe Biden’s status as the 2020 field’s front-runner, in spite of his cringeworthy efforts to account for his part in that history, speaks volumes about how far today’s Democrats still have to go before they can meet the challenges of Trumpism head-on. A good deal of Biden’s inflated standing comes from an all-too characteristic Democratic posture of risk aversion, compounded by a talismanic faith in Biden’s mystic “electability.” Many party leaders and voters clearly view a Biden candidacy as the safest post-Trump course correction—and Biden as a pragmatic man of the people with the unique ability to build coalitional bridges between coastal elites and the so-called forgotten men and women of America’s heartland.
As if to underscore the inherent limitations of this posturing, Biden has trafficked enthusiastically in images of good ol’ boy politicking as evidence that he is the right man for the job. As his reminiscences of Senate business in the sepia-toned (but decidedly white) past tripped up his early campaign efforts, Biden has tried, gingerly to grudgingly, to walk his comments back. But those overtures point up a disquieting fear about his bid to defeat Trump: He may well perpetuate the fallacies of elite comity that marked his early career—and that continue to animate Democratic strategies to win back voters who are not as yet scandalized by the racist and misogynist rabble-rousing that is Trumpism. Falling back on that strategy alone may be fool’s gold. Not only is it questionable whether Trump’s heartland faithful will ever return to the Democratic column; the clouds that hang over Biden’s candidacy also suggest that when the going gets tough, the tough might find themselves going it alone. Biden’s missteps present a troubling pattern of sacrificing the interests of the very constituencies that stand to lose the most if the 2020 battle is undercut by the politics of appeasement. Voters who are activated to battle tooth-and-nail against the resurrection of our white supremacist past have every reason to press candidates for evidence that their failing marks on some of the most consequential issues affecting race and gender justice won’t be repeated. So far, the current front-runner has offered little substance in his defense, beyond Obama stardust and affability. That’s not enough in the best of times, and it is certainly not sufficient now.
For starters, Biden has yet to accept any genuine responsibility for how he helped preside over a process that depicted women—African American women—as conniving bottom-feeders. As chairman of the Senate Judiciary Committee in 1991, Biden actively enabled the humiliation and stigmatization of Anita Hill in that terrible spectacle of patriarchal impunity. He failed to call the multiple existing witnesses who could corroborate Hill’s testimony, while granting future Justice Clarence Thomas the ability to testify both before and after his accuser. From his chairman’s perch, meanwhile, Biden took a sharply inquisitorial line of questioning toward Hill, and reassured the country that Thomas’s character was beyond reproach.
Biden’s long-overdue apology for his central role in the Hill-Thomas fiasco was typical Biden—that is to say, the rough equivalent of a reckless driver’s acknowledgment that a hapless bystander may have been harmed while he was behind the wheel. But well into the #MeToo era, Biden’s entire driving record warrants explaining, in close detail. Almost three decades after the Thomas hearings, he seems unaware of how his penchant for Senate friendliness made him a prime choreographer of a cultural debacle steeped in the toxic brand of white-male privilege that Moya Bailey and Trudy have come to call misogynoir.
The harm done to Anita Hill, to Black women, and to sexual harassment victims overall is not the half of it. The mishandled hearings put Thomas on the Supreme Court, and Thomas has gone on to be the most influential justice currently sitting. Any basic review of the long train of recent high court decisions dismantling the modest protections erected to safeguard our democracy against the unlicensed rule by the wealthy and racially privileged can’t help but highlight their common thread: The majority are 5–4 opinions in which Thomas’s vote has turned the country inside out.
In the same discursive vein, Biden’s wistful recollection of working alongside segregationists James Eastland and Herman Talmadge sent up clear alarms. To be sure, from a certain realpolitik vantage, one can defend Biden’s collaboration with white power as a necessary evil. At the same time, however, Biden’s nostalgia for his pragmatic former alliances with segregationist lawmakers bespeaks a foreshortened moral compass, one prone to equate bigotry with collegial rascalry.

July 21, 2017, Mosul was declared 'liberated' by the government of Iraq.  Many bought the hype.  There was no reason to.  As we observed at the time:

Hayder al-Abadi has not done a good job.

Nouri was an outright thug.

Compared to him, anything looks better.

But let's not mistake Hayder not digging the hole even deeper for actually addressing the problem.

Two full years later and one prime minister later, nothing has really changed.

Over 300,000 residents of Iraq’s #Mosul are still displaced, with no homes to go back to two years since the liberation of the city from #ISIS.
0 replies1 retweet12 likes 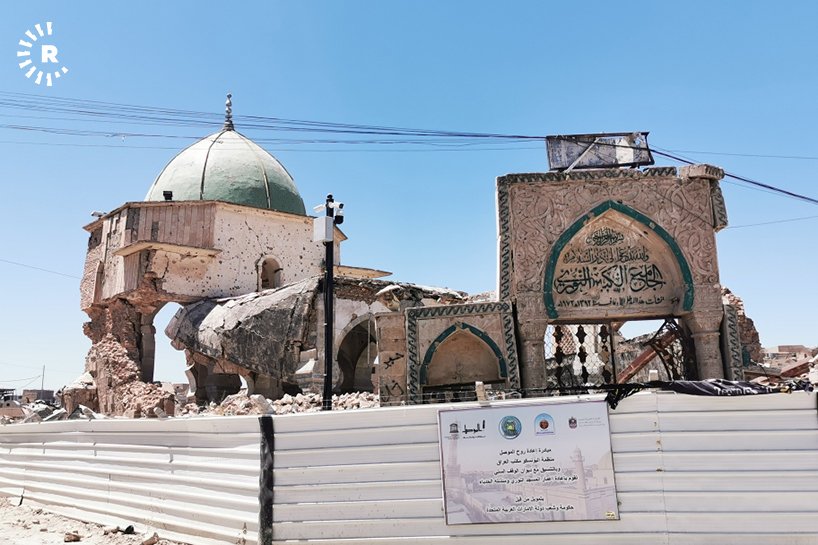 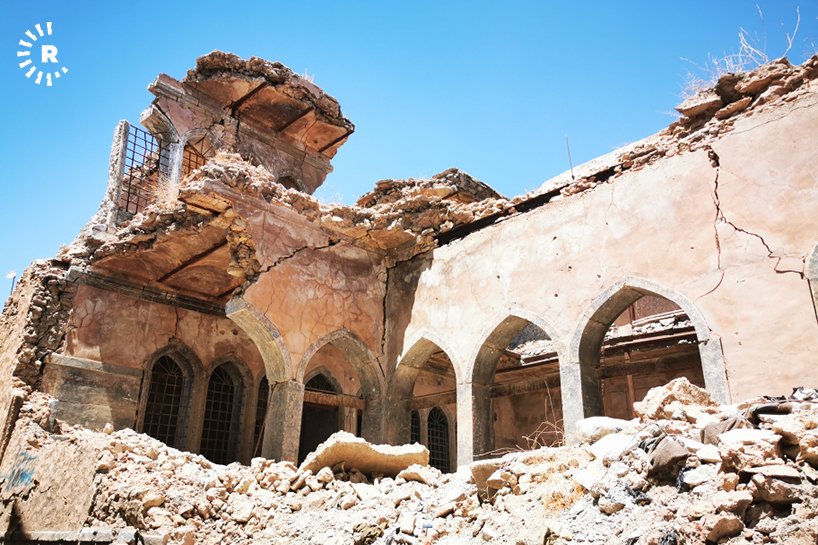 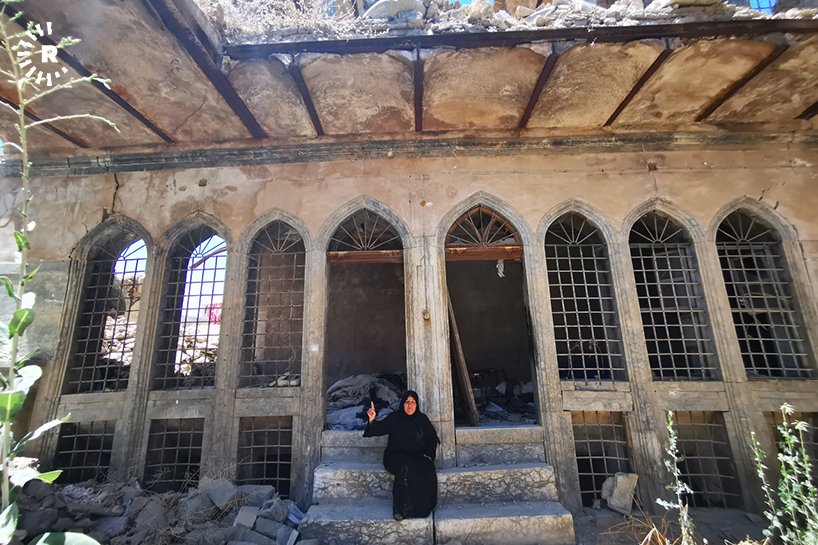