You want to talk racism, you better include Barack's remarks.

Wednesday, August 7, 2019.  Mike Gravel ends his campaign and endorses Bernie Sanders while, for too many others, the vanity campaigns roll on.


The nonsense never ends as the race fot the Democratic Party's presidential nomination takes place.  You've got the hysterical Neera Tanden clutching the pearls over Barack Obama (Republicans glorified Ronald Reagan! -- who the f**k cares?  Are we supposed to be Republicans?  We never glorified Bill Clinton or Jimmy Carter.)


About Face: Veterans Against the War Retweeted

I'm sure your fam wasn't harmed by the Obama deportation machine. Mine was. Some of the fams of the ppl who were protesting Biden were. Stupid is running on a pro-immigrant platform, having an entire Democratic gov, not passing any legislation & instead deporting millions of us.
Erika Andiola added,

Blasting Obama was so moronically stupid. It's mind boggling to me.  It's a sign campaigns are listening to the wrong signals, which is usually a sign a campaign is off. twitter.com/tribelaw/statu…
66 replies965 retweets4,213 likes

You've got so many weighing in when they know nothing.

Stop the fake news, people.  Joe Biden's responsible for the 1994 crime bill and, if you don't believe me, why not believe Joe Biden himself?


And I do have -- I do have a record of significant accomplishment.  The crime bill, which became known as the Clinton crime bill, was written by Joe Biden, the Biden crime bill.  That required me to  cross over, get everyone together, not -- no one's civil liberties were in any way jeopardized.  We put 100,000 cops on the street.  Violent crime came down.  The Violence Against Women Act, what we did in Bosnia, and so on.  So I have a track record of being able to cross over and get things done.

"The crime bill, which became known as the Clinton crime bill, was written by Joe Biden, the Biden crime bill."  That's Joe speaking publicly in 2007.

Yeah, he deserves to be held accountable for the bill.  And he was happy to brag about it as late as 2007. 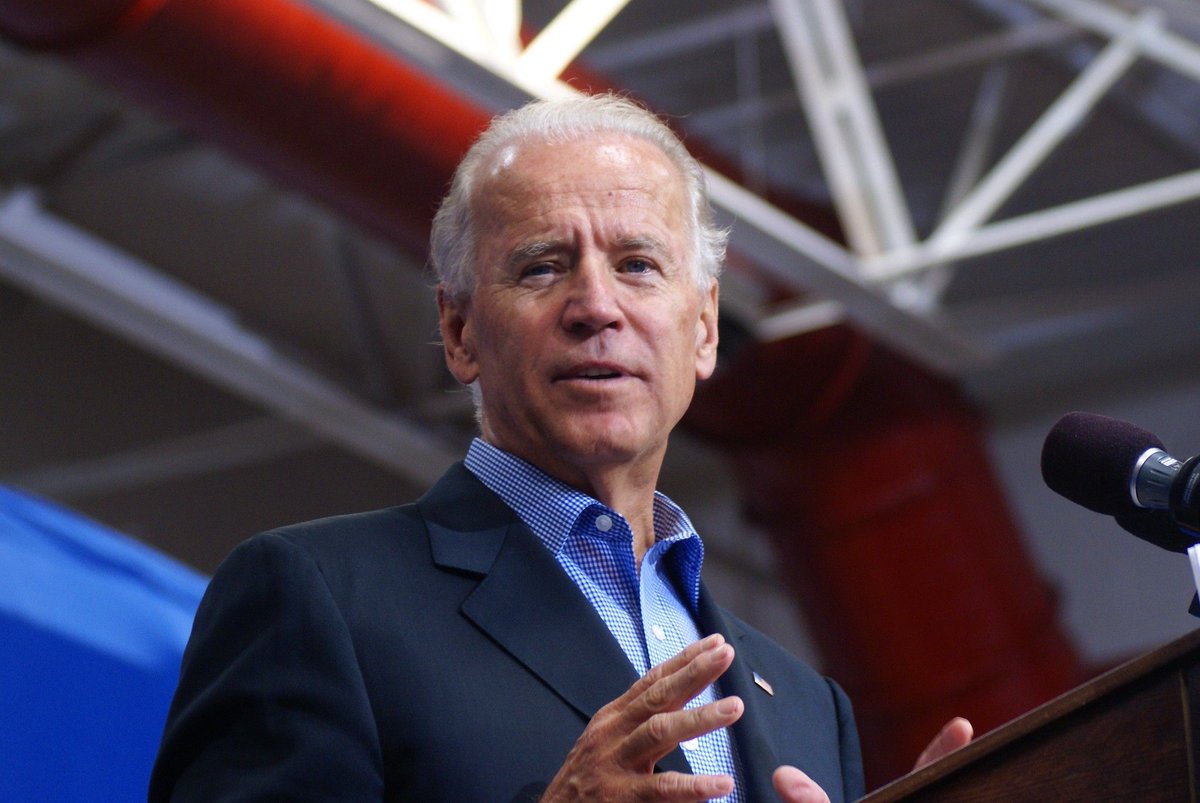 
Joe Biden just said prisoners should be given access to resources when they step out of jail, like Pell grants, but Biden's 1994 crime bill literally took away Pell grants from felons.
57 replies675 retweets3,324 likes

...if you author a crime bill that devastated an entire generation of young black men; if you fight instituting tools to help integrate schools; if you continue to put your hands and lips all over young women uninvited, you should reconsider your career path...
0 replies0 retweets0 likes


There is one less candidate running for the Democratic Party's presidential nomination.


Today we’ll be ending the Gravel 2020 campaign, as we have been planning from the start. It was an incredible honor to work for Mike, one of the greatest men of our time—someone of boundless courage and incredible tenacity.
8:48 AM - 6 Aug 2019
309 replies1,136 retweets11,404 likes


Of course, this was not a “campaign” in the strict sense: we never wanted to win, and always made that clear. The campaign wasn’t about Mike as much as it was in his honor—it was a crowdsourced and intimately democratic project, about ideas rather than individuals.
19 replies139 retweets2,340 likes


We did a lot of good. We aired anti-Biden ads in Iowa and nationwide, and created and pushed the most detailed, radical platform of any candidate. We’ll be donating the funds, which we expect to come to $100,000, to Flint and a few other charities once we’re done with merch.
14 replies190 retweets2,651 likes


And the list of 67,000 active donors we compiled will be invaluable in helping Democrats like @MeetMckayla and @JDScholten—we hope to use it to aid progressive candidates as they wrest power from the establishment.
10 replies129 retweets1,786 likes


But the most enduring legacy of any campaign—think McGovern ‘72 or Sanders ’16—is its influence on young people. And we reached them: one Iowa Gravis poll showed us with 5.9 percent support (ahead of Harris and Warren) among people aged 18 to 29. That's a success.
6 replies127 retweets2,081 likes


A campaign for an 89-year-old, managed by teenagers, got several times more donations than five congressmen, two governors, a senator, and the mayor of America’s most populous city. And we frequently outpolled them, too! I mean—we qualified for the Democratic debates!
7 replies435 retweets3,019 likes


Mike isn’t perfect. We often differ with him. But he has that great virtue—rare among our political class—of being human. There is no artifice. As Rorty said: “If we look to people who make no mistakes, who were always on the right side...we shall have few heroes and heroines.”
20 replies102 retweets1,775 likes


This campaign, really, is about crafting a new society—a kind and gentle society, based on dignity and equality, solidarity and love. A good life for all, regardless of inborn traits or one’s station at birth. A world of peace and real freedom, democracy and fraternity.
8 replies154 retweets1,853 likes


We sought to make explicit themes whispered by larger campaigns—a revolt against the soullessness of contemporary politics, a forthright egalitarian populism reminiscent of Bryan, Long, and Yarborough, a desire to restore fun and camaraderie to politics.
4 replies81 retweets1,421 likes


We do not enjoy politics; it is an ignoble craft, and we have more respect for those who entered it out of a resigned sense of duty than those who think they have the mandate of heaven. We did this for Mike, a great man dishonored in his time, and for the principles we hold.
13 replies123 retweets1,733 likes


Irony and humor are important because they're tools to skewer the powerful, and we use them because they attract support. (It worked!) But beware of irony lapsed into fatalism. Be a happy warrior, be joyful—but be earnest. If you give into cynicism, you become useless.
16 replies328 retweets2,076 likes


Our favorite quote of Mike’s is from 2008, when he was asked about prayer: “What I believe in is love. And love implements courage.” Our politics, and Mike’s, is based in love, in the duty “to do justly and to love mercy.” As Dorothy Day said: “The final word is love.” That’s it.
5 replies145 retweets1,608 likes


So with that, the Gravel 2020 campaign is over. We want to thank our wonderful staff and supporters. We’re going on vacation and won’t be tweeting for a while. Henry is abroad right now; David will be traveling around New England. You can follow us at @humford and @davideoks.
22 replies103 retweets1,684 likes


This account will transition into the account for the Gravel Institute. Of course, the character of the account will thus change. (We’re not sure we’ll be running it!) Details for that will come later, after August.
20 replies121 retweets2,137 likes


We’ll eventually follow up with an article about what the Gravel campaign accomplished, and we’ll be thanking a few of our supporters individually over the next few weeks. Thank you all for what you accomplished. We are eternally grateful.
81 replies111 retweets2,641 likes

"I am proud and honored to endorse Senator Bernie Sanders for the presidency of the United States."
/>


This is why @MikeGravel's Bernie Sanders endorsement means so much.

Here's Gravel breaking down while reading the 4,100 page Pentagon Papers into the Congressional Record. He read past 1 AM. No other senators were left in the room. He wanted to make sure every word was recorded.
79 replies1,802 retweets7,672 likes


It is time for others to follow Mike's lead.  As we argued here on Sunday in "Talking entry" and at THIRD in "Editorial: Bye Tulsi" and "Joe Biden is not the answer," it's time for the vanity campaigns to close shop. Not only are you not going anywhere, you are keeping real candidates -- like Elizabeth Warren and Bernie Sanders -- from getting the time on the debate stage and in the media that they need to make important arguments.

Tulsi's campaign is going nowhere.  Gabbard should focus her efforts on re-election before that's completely off the table.  Her sole reason for being on the debate stage was to call out endless wars and those who brought us the endless wars.  She refused to do that last week in the debate and then, much worse, spent the following days minimizing War Hawk Joe Biden's actions and lying about him saying he was 'sorry.'  She achieves nothing on the stage of value.  Her vanity -- even her vanity -- should have vanished long ago as she saw no support.

Unfortunately you refused to go after your friend @JoeBiden on his disastrous Iraq vote and his warmongering leading up to the Iraq war. He was one of the main cheerleaders of the Iraq war! You blew a golden opportunity tonight to call him out on his warmongering!
3 replies3 retweets24 likes

Maybe she was too pretty to garner support?  It could be and if that helps her vanity and helps her move along to something else, Tulsi, you're too pretty.  They couldn't take you seriously because you were so pretty.

People did not take to her.  She got a spot on the stage at the June debate and at the July debate and neither appearance bumped her support levels.  But college students never liked her and that's really a warning sign because (a) her age should have made it much easier for her to communicate with them (she's only 38) and (b) the issue of the forever wars (and the hypocrisy that surrounds them) are issues that matter to college students.  But over and over, we have encountered campus anti-war activists who supported Bernie or Elizabeth.  A few have supported Beto.  A few are supporting Adam Kokesh -- who has gotten no corporate media coverage.  The day after the last debate, was there any network that didn't have Tulsi on?  And still the polls show no movement for her.

The vanity campaigns need to end.  That doesn't mean Tulsi will drop out.  We can't force her to.  You'd think her inability to get above 1% all of these months would have forced her to but apparently her vanity prevents both self-examination and embarrassment.  But if she cared about any cause that she pretends to, she'd be following Mike Gravel's lead and announcing she was closing her campaign and endorsing someone.


She'd probably endorse Joe Biden because that's how useless she is.  But she needs to end her vanity campaign.


.@JoeBiden opposes war to his core that he voted for the Iraq War and even presented an award to a war criminal for endless war. #DemDebate2

About Face: Veterans Against the War