All afternoon at work, all I wanted was a Subway sandwich.  Maybe sweet onion and chicken teriyaki.  Maybe just something as basic as plain tuna.  But I wanted Subway.

And I stopped at not one, not two, but three Subways on the way home -- all with no luck.

Honey-oat.  That's the bread I love.

Didn't know it was suddenly a crime.

These are supposed to be healthy choices.

At all 3, I was offered white bread or Italian -- the latter actually is, yes, white bread.

White bread is not a healthy choice.

I see that some people lost it awhile ago.

We didn't.  And not only did we not lose it, it's still on the menu at all three Subways.

F**k Subway, I can eat elsewhere.  I ended up getting ribs and BBQ.

Tuesday, August 27, 2019.  Support for Joe Biden appears to be slip-sliding away, Iraq's prime minister finally finds his (weak) voice, and much more.


The race for the Democratic Party's 2020 presidential nomination continues and things just continue to get worse for the press favorite Joe Biden.  The former Vice President spent the weekend publicly declaring "I'm not going nuts," for example.  When you have to declare it, you've already got a problem.  And in the clip below he stumbles around whatever it is he's trying to say and in a manner that should have everyone freaking out at the notion that he might share a debate stage with Donald Trump.


Rebecca Fishbein (SPLINTER) observes, "Obviously, one sluggish interview doesn’t mean anything, but this keeps happening, so much so that it’s becoming increasingly difficult to see how 2020 Biden will be able to keep up with Donald Trump’s admittedly biting barbs on a debate stage."  This comes as Ben Schreckinger (POLITICO) reports:

Joe Biden’s younger brother told potential business partners that the former vice president would help their firm land business with court systems and would incorporate their health care model into his 2020 presidential campaign, according to new allegations made in a court filing in Tennessee.
The allegations are consistent with others made over the years that relatives of Biden have sought to enrich themselves off of his public service. But they go further, representing the first explicit claims that James Biden offered to have the former vice president use his clout to further private business interests.


The charges are similar to previous ones made against James Biden and Joe's son Hunter with regards to Paradigm Global Advisors.  And James Biden's Iraq contract never should have happened either.


Did you know: Joe Biden's brother, James Biden was given a $1.5 Billion dollar government contract to build homes in Iraq during the Obama Administration How many billion dollar deals were given to the Biden family while he was VP? Why is this getting no coverage? RT!
3,094 replies36,514 retweets61,287 likes

Alex Bruesewitz‏ @alexbruesewitz Jul 8
While Joe Biden was Vice President, the Obama Administration awarded his brother, James Biden, a $1.5 billion contract to build housing in Iraq. Joe Biden’s brother had ZERO documented history in residential construction. Why is nobody talking about this corruption?
478 replies9,478 retweets17,661 likes

Joe pushed for the Iraq War and his family got rich off of it.  Isn't that what we usually say about Dick Cheney?  Why in the world would we give the presidential nomination to someone like that?

More and more, it appears that we won't.

Recently, America’s dumb-ass Uncle Joe came out of his face to ask a crowd to imagine if America’s first black president, would’ve been assassinated.
“Imagine what would have happened if, God forbid, Barack Obama had been assassinated after becoming the de facto nominee?” Biden asked a crowd at a Hanover, N.H., stop on Friday.
While we get the point he was trying to make, at least two older black women in the crowd sucked their teeth and mumbled, “F**k this bats**t crazy ol’ white man.”*
Well, looks like his “Who has two thumbs and is President Barack Obama’s best friend?” schtick is drying up as a new national poll from Monmouth University shows Biden now in a three-way tie with Sens. Bernie Sanders (I-Vt.) and Elizabeth Warren (D-Mass.) for the Democratic presidential nomination.

In a new Monmouth University poll, former Vice President Joe Biden's popularity was shown to be dropped by 13 points ( with 19 per cent support). Whereas, Bernie Sanders and Elizabeth Warren's popularity is just ahead of Biden (at 20 per cent).


The poll also showed Biden losing members of his coalition. This makes the next round of debates in September crucial for him. Biden's decline comes from registered Democratic voters and Democratic-leaning voters. He has also lost support among people who don't have a college degree and those under the age of 50. Warren's popularity has risen slightly while Sanders' has remained stable.


Of the polling results, Camilo Montoya-Galvez (CBS NEWS) explains, "Monmouth's pollsters attributed the decline in support for Biden's candidacy to several developments. The former vice president lost the backing of some voters who identified as moderate and conservative Democrats, with Warren and Sanders gaining traction among these voters. Biden also lost support among more liberal Democrats, who contributed to the modest gains by candidates like Booker, Castro, Williamson and Yang." 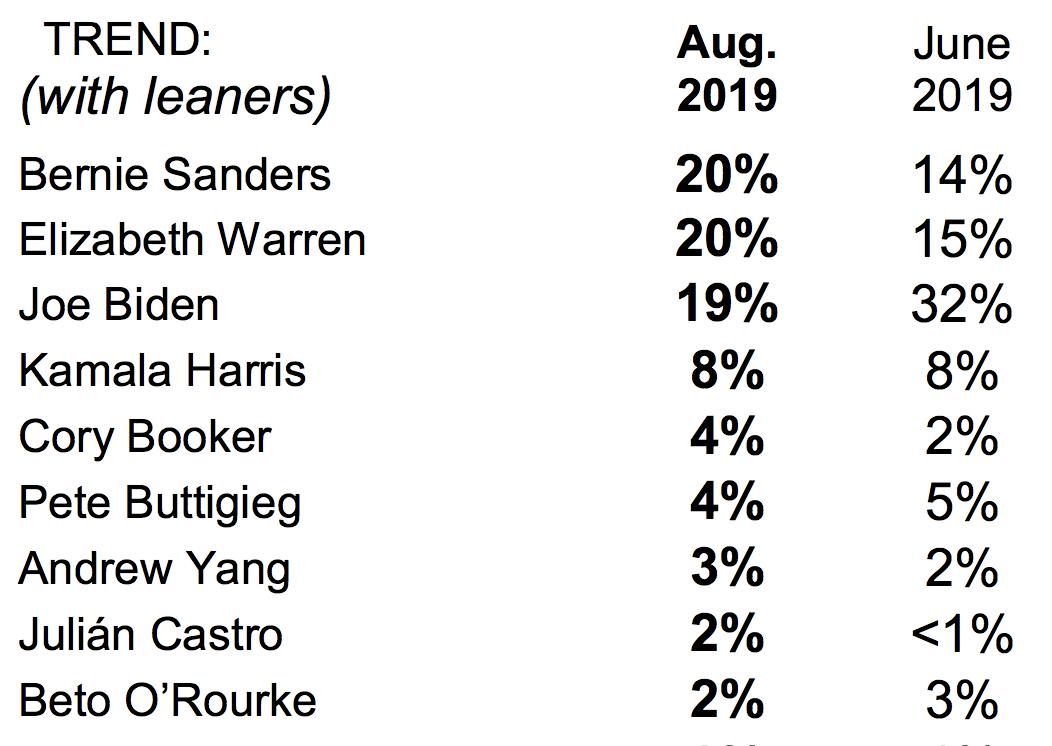 
After Sanders, Warren and Biden, who comes next?  At 8% is Kamala Harris, 4% is Cory Booker, 4% is Pete Buttigieg, 3% is Andrew Yang, and at 2% are Julian Castro, Beto O'Rourke and Marianne Williamson.  As for Tulsi and a host of others?  Montova-Galvez reports, "The rest of the candidates polled at 1% or lower."

Which is too bad for them.  The window for the next debate is closing.  Tomorrow is the last day a poll can show up and be counted.  And Tulsi needs two more new polls to come along and find her at 2% or higher in order to qualify for this round of the debates.

She and her campaign are increasingly worried those polls will not arrive (and they're probably right) which is why she's suddenly concerned about the qualification criteria.  When it worked to get her on stage in June and July, she was all on board.  She didn't take a moment to complain about it or to express that maybe other candidates who didn't qualify, like Iraq War veteran and US House Rep Seth Moulton, should be on the stage.  She just cared about herself.

And now she needs two polls to come along -- approved polls -- in less than 48 hours or she doesn't make the cut.  Now she's concerned.

Fair or not, these rules are not being made up as the campaigns go along.  They were established and in place.  Do I think they're fair?  No, I don't.  And I've said that all along.  But for someone like Tulsi to complain only when the rules don't work in her favor is nothing but sour grapes.

Meanwhile, how are things going in Iraq?

This is what the US-led wars of aggression on Iraq, over a period of 28 years (1991-2019), have reduced Iraqis to do in one of the richest countries and one of the most ancient civilisations on the planet! 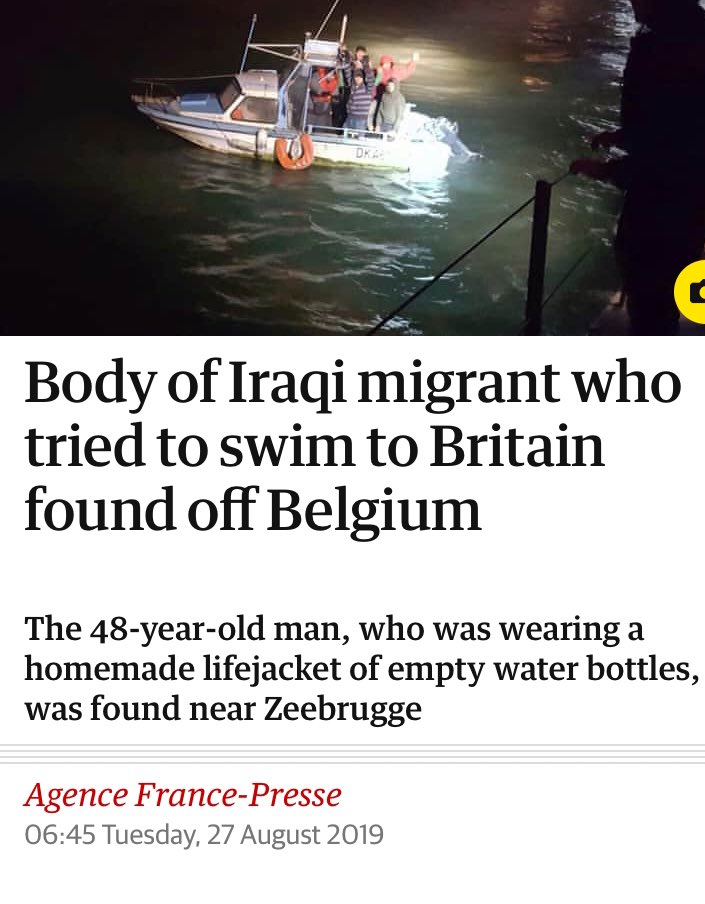 What a proud moment for Joe Biden who has said he regrets nothing -- that would include his vote for the Iraq War, his support for that war, his efforts at selling that war.  He regrets nothing.


Before ISIS, Mosul was home to 15,000 Christians. In July, Mosul was home to about 40. Any questions?
“This cultural genocide, thanks to the indifference of Europeans and many Western Christians more worried about not appearing ‘Islamophobic’ than defending their own brothers, [has] sadly worked,” The Gatestone Institute wrote.
Mosul, the third-largest city in Iraq and home to one of the largest Christian populations in the region before the rise of, and persecution by, ISIS, now has the reputation of celebrating Christmas, minus the Christians. And yes, political correctness — fear of calling out Islam for what it often is — is in large part to blame.
The Voice of the Martyrs lists nine major radical Islamic groups, including Al Shabab, Boko Haram, al Qaeda, the Muslim Brotherhood, ISIS and the Taliban, responsible for persecuting Christians from Afghanistan to Kenya to Libya.

I don't know that I agree with her conclusions -- political correctness, for example -- but this is a serious issue.

Other issues that may be at play in the lack of attention this issue receives?  The western press has a complete lack of interest in Iraq.  The topic bores them and they must always be stimulated or they don't play well with others.  The issue of Christianity is a topic that the US press struggles to avoid.  From being "p.c."?  No because so many of us on the left are hostile to Christianity (I am not hostile to any religion, just FYI).  The topic may also suffer because it's 'way over there' and proximity is the focus of news in the US.  In addition, this is both a complex and ongoing issue so if they report it tomorrow, they know some of the reaction will be, "Why is this the first I'm hearing of it?  Have you been sleeping on the job all these years?"  In addition, US broadcast networks don't have a lot of reporters over there.  (CBS has one reporter in Iraq, at last count, and they were the only broadcast network who had any reporter on the ground in the country.)

Meanwhile, last week's admission by US government officials that the government of Israel has been bombing Iraq continues to create shock waves.  AP reported yesterday:

A powerful bloc in Iraq’s parliament called on Monday for the withdrawal of U.S. troops from Iraq, following a series of airstrikes targeting Iran-backed Shiite militias in the country that have been blamed on Israel.
The Fatah Coalition said it holds the United States fully responsible for the alleged Israeli aggression, “which we consider to be a declaration of war on Iraq and its people.” The coalition is a parliament bloc representing Iran-backed paramilitary militias known as the Popular Mobilization Forces.


REUTERS notes, "Iraqi President Barham Salih and Prime Minister Adel Abdul Mahdi on Monday condemned air strikes on Sunday that hit bases and weapons depots belonging to Iraqi paramilitary groups, which the factions blamed on Israel."  They forget to note that this is the first time Adel Abdul Mahdi has said a word about this -- despite the fact that reports first emerged at the end of July, despite the fact that last week, former prime minister Nouri al-Maliki issued his own statement calling out the bombings.  Mahdi has become not only inept but also invisible.

Iraq's second largest political party on Tuesday called for a total withdrawal of U.S. forces after Israel carried out attacks on Iraqi military bases, which killed one military commander.
A series of Israeli air raids Monday attacked bases and weapons depots in Iraq belonging to Popular Mobilization Units, which is comprised of mostly Shia Muslim militias.
The Fatah Alliance said it blames the United States for the Israeli aggression and considers the strikes a declaration of war by Israel. The party said U.S. troops are no longer needed in Iraq.