Trump and the press

President Trump has insisted that his press coverage has been historically negative, and a newly released Harvard journalism study backs him up.
A major study released last week by the Harvard Shorenstein Center on Media, Politics and Public Policy found that the coverage of Mr. Trump during his first 100 days was “unsparing,” with negative reports outnumbering positive ones by 80 percent to 20 percent.
“Trump’s coverage during his first 100 days set a new standard for negativity,” said Harvard Kennedy School of Government professor Thomas E. Patterson in the report.
He added that the coverage was “negative even by the standards of today’s hypercritical press.”


Does that surprise you?


His birthday's passed.  But what I want to note is that amazing artwork.


I praise who ever drew that.  Excellent.


Thank you, Brett, for Tweeting that, honestly, no sarcasm.

But if we're talking about what this isn't, can we talk about what it is?

Because the Iraq War drags on and surely you know that.

When does it end?


The US and Middle Eastern countries have backed a new pact that promises to provide extra troops for defeating Islamic State, singles out Iran for destabilizing the region, and says that Riyadh is to become the heart of the region’s counter-terrorism operations.
Described as the Riyadh Declaration, the document was signed following US President Donald Trump’s visit to the Saudi capital for a summit that brought in Islamic representatives from 55 countries, and vowed “to combat terrorism in all its forms, address its intellectual roots, dry up its sources of funding and to take all necessary measures to prevent and combat terrorist crimes in close cooperation among their states.”


A lot of reports over the weekend but CBS NEWS goes with what?

He also looks a lot like Rex Harrison in the film STAIRCASE, doesn't he?

But then a journalist wouldn't be offering that nonsense on day 215 of The Mosul Slog.


Iraqi government-allied troops arbitrarily detained at least 100 men in late April 2017, in some cases torturing them during interrogations, Human Rights Watch said today.
Human Rights Watch interviewed three men from al-Hadar, a village 90 kilometers southwest of west Mosul, who were detained by the Popular Mobilization Forces (known as the PMF or Hashd al-Sha'abi) and two local officials who had knowledge of the detention operations in the area. The men said the fighters detained them as they fled their homes because of the fighting, and held them for up to 15 days in a school building and in one case a home in an area solely under PMF control. Their captors interrogated them about possible Islamic State (also known as ISIS) links, and in two cases beat them with thick metal cables, before releasing them and a small number of other detainees. Other detainees told them they had also been beaten during interrogations.

“Given the previous track records of PMF abuse in the area of screening and detaining local men, Baghdad should treat these findings with the gravest concern,” said Lama Fakih, deputy Middle East director at Human Rights Watch. “Authorities should do all in their power to ensure that families fleeing the fighting around Mosul are able to get to safety, not tortured in secret facilities.”

It's not covered by CBS NEWS which is working overtime to sell war yet again.

The Mosul Slog's been a disaster.

As the Norwegian Refugee Council notes:

The last three years of conflict in Iraq have caused a displacement crisis that is ‘nearly without precedent’ according to a report released today by the Internal Displacement Monitoring Centre (IDMC) and the Norwegian Refugee Council (NRC).


The Global Report on Internal Displacement found that widespread military offensives in Iraq caused almost 660,000 new displacements in 2016. One in ten people displaced by conflict around the world in 2016 were displaced in Iraq, bringing the total number of internally displaced Iraqis to over three million. A growing proportion of Iraqis have also been displaced more than once.
“Internal displacement is not solely the responsibility of national governments,” said Heidi Diedrich, Country Director of the Norwegian Refugee Council in Iraq. “The international community must support the efforts of the Iraqi Government to help those displaced by conflict in this country,” she said, speaking from Erbil, Iraq.

Photojournalist David Bacon has had many exhibits and written many books, his latest book is The Right to Stay Home: How US Policy Drives Mexican Migration.   He has an important new photo essay that we'll note the opening of. 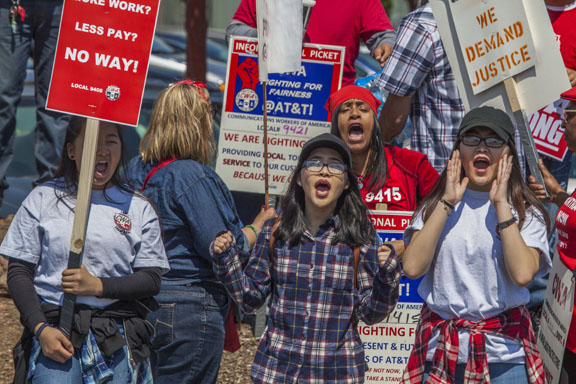 Around 40,000 members of the Communications Workers of America (CWA) at AT&T could walk off their jobs, starting Friday, for a three-day strike, as pressure continues to mount on the corporation to settle fair contracts.

In California and Nevada, around 17,000 AT&T workers who provide phone, landline and cable services have been working without a contract for more than a year. Last year, they voted to authorize a strike with more than 95 percent support. And in February, an estimated 21,000 AT&T Mobility workers in 36 states voted to strike as well, with 93 percent in favor.


Full disclosure: David Bacon and In These Times staff are members of the Communication Workers of America, and the union is a sponsor of the magazine.

Interviews with David Bacon about his book, The Right to Stay Home:

Book TV: A presentation of the ideas in The Right to Stay Home at the CUNY Graduate Center
http://booktv.org/Watch/14961/The+Right+to+Stay+Home+How+US+Policy+Drives+Mexican+Migration.aspx