Oh, this made me laugh!

If you missed it, read Betty's "Told ya Kamala was a fake ass."  Kamala Harris has a mother who is Indian (from India, not Native American).  She is trying to erase that and play herself as Black.  She's not.  But to try to play us all for Boo Boo The Clown, she's lied that she was smoking pot in college and listening to Snoop Dogg and Tupac.  But they weren't even recording when she was in college. 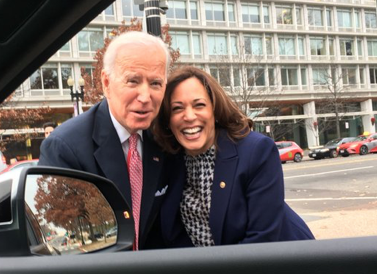 We will not be played, Kamala.

Iraqi Prime Minister Adel Abdul Mahdi on Tuesday met with acting U.S. Secretary of Defense Patrick Shanahan in Baghdad and expressed the rejection to any permanent foreign military bases on the Iraqi territory.
Abdul Mahdi's comment came during a meeting with Shanahan in Baghdad's heavily fortified Green Zone, where the two sides discussed "the development of relations between the two countries, the war against terrorism and developments in the region," a statement by Abdul Mahdi's media office said after the meeting.

From a ditz to Jason Ditz (ANTIWAR.COM):


Shanahan insists that the US has a “limited role” the intend to stick to in Iraq, and that the US will remain in the country by invitation. How long will that invitation last?

That’s not clear at all, as several Iraqi political blocks are pushing Abdul-Mahdi for a formal timeline for the end of the US presence. With ISIS effectively defeated, Iraqi MPs see little reason for a large US military presence to remain.


Which is a solid take; however, as we all to often forget, the continued US presence has always been allowed for one reason The US-installed government fears being overthrown.  Yes, that was most obvious when the deeply paranoid Nouri al-Maliki was prime minister due to his constant public statements that there were plots against him and that this group or that group was a terrorist and blah blah blah.  But it is fear of the Iraqi people that has always led the post-2003 leaders to allow US troops to stay in Iraq.  And any potential threat -- real or imagined -- results in panic on all sides.  (See Barack Obama's rush to send in US troops in the summer of 2014.)


Shanahan is now out of Iraq.


Last month, according to local media reports quoting key politicians and others, the Fatah party persuaded the government to give the Hashd control of the Mutassem Co., one of the largest state-owned construction contractors in Iraq. The Hashd intends to use its fighters to pour cement, pave roads and repair homes as part of the effort to rebuild the country after so many years of war.
Its growing influence has stirred fear in Washington that the Hashd could help Iran circumvent U.S. sanctions, which severely limit its ability to export its goods and do business with other countries.


The U.S. government also has reason to be concerned about its ability to maintain a military presence in Iraq.

Shi’ite Muslim paramilitaries that helped Iraqi forces drive the Sunni IS out of its last strongholds in Iraq have taken control of the thriving trade in scrap metal retrieved from the battlefield, according to scrap dealers and others familiar with the trade.
Scrapyard owners, steel plant managers and legislators from around the city of Mosul, the de facto IS capital from 2014 to 2017, described to Reuters how the Popular Mobilisation Forces (PMF) have made millions of dollars from the sale of anything from wrecked cars and damaged weapons to water tanks and window frames.
The PMF deny involvement. “The PMF does not have anything to do with any trade activities in Mosul, scrap or otherwise,” a PMF security official in Mosul said.


Considering the abuses these militias have heaped on civilians, it's scary to think they'll now be over scrap metal, especially "wrecked cars."  I'd hate to be the Sunni family arguing with the militia that our car worked just fine and we weren't getting rid of it.

Meanwhile, THE CANADIAN PRESS reports researcher and University of Toronto PhD candidate Tracy L. Spurrier is being honored for her work in helping to discover Queen Hama, "a long-lost Mesopotamian queen."  They note:

Queen Hama's story began some 3,000 years ago in the lost city of Assyria and is closely tied to another royal, Queen Mullissu-mukannishat-Ninua, who placed a curse on the tomb she'd be buried in."Anyone later who removes my throne from before the shades of the dead, may his spirit receive no bread!" the inscription reads.
The tombs were lost until the late 1980s when researchers excavated a palace in Nimrud, near the northern Iraqi city of Mosul. Inside they found the bones of the queen who laid the curse along with those of several other unidentified queens.
The archeologists also discovered a treasure trove of gold, Spurrier said.
"It's amazing, it rivals King Tut in terms of detail and quality," she said.


Hama died young, and perhaps suddenly, hinting at why she was interred in a bronze coffin rather than the usual stone sarcophagus. She was no more than 20, but the gold crowns and other riches in her grave signal her power and wealth.
“She was so young when she died, and we don’t know how,” says Tracy Spurrier of the University of Toronto in Canada, author of a recent study identifying Hama. But “she was clearly an important person, and she deserves to be remembered.”
Hama was queen of Assyria, an empire based in what is now Iraq and stretching as far as Egypt. Hama probably left politics to her husband, King Shalmaneser IV, who ruled during the mid 8th-century BC.
But Assyrian queens were “the holders of the wealth of the household,” controlling the royal residence and property, says Mark Altaweel of Britain’s University College London, who was not part of the study.