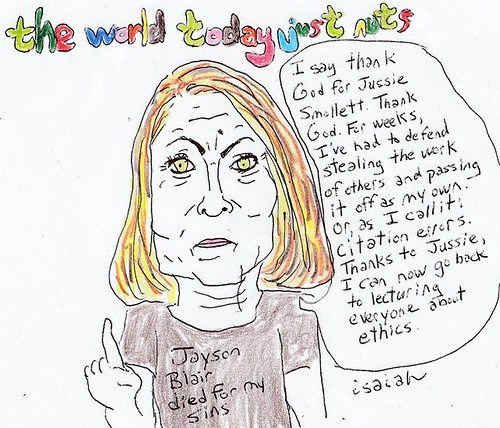 
If Smollett falsified a police report, the charge is a Class 4 felony in Illinois, and carries a potential sentence of one to three years in prison. Smollett could also be ordered to pay restitution to compensate for the cost of the Chicago Police Department investigation.
“It’s a very, very, very serious situation,” said Phil Turner, a former federal prosecutor who now works in criminal defense in Chicago. “He’s got some very significant exposure.”
Smollett told police that two men attacked him at 2 a.m., poured bleach on him, and put a noose around his neck. He also claimed they told him that it was “MAGA country,” a reference to Donald Trump’s campaign slogan. Chicago investigators are now seeking to speak with Smollett.
Federal investigators are also probing a threatening letter that was sent to the “Empire” set. The letter included homophobic language and contained a white powder, which was later determined to be a crushed painkiller tablet. Should that letter turn out to be fake, federal prosecutors could also pursue a mail fraud charge, legal experts say.
Andrew Weisberg, a former prosecutor in the Cook County State’s Attorney’s Office, said Smollett could get probation, assuming that he has a clean record. Update: NBC News reported Tuesday, and Variety confirmed, that Smollett pleaded no contest in 2007 to three misdemeanor counts stemming from a DUI incident in Los Angeles, including one count of giving false information to the police. According to the criminal complaint filed by the L.A. City Attorney’s office, Smollett gave a false name, pretending to be his brother Jake. He was sentenced to three years of probation.

Starting in the US, War Crimes have been scrubbed from an individual's record.  Jeff Schogol (TASK AND PURPOSE) reports that US Maj Fred Galvin's record will no longer reflect the original findings regarding "a March 2007 incident" in Afghanistan or a later finding that ended his military career.  Though the Marines fired Galvin over the incident, the Board for Corrections of Naval Records has cleaned his record:

Galvin's attorney Raymond Toney said the board's decision was unusually in depth and detailed for a correction of records request.
"Basically, it's a clean scrub of his record," Toney told Task & Purpose on Monday. "Normally, when you read a favorable decision, it's very hard to tell even what the case is about. There may be a sentence or two describing what the issues that were raised. In the past, they assiduously avoided providing the level of detail that they did in this case. My impression is the board wanted to set the record straight with this decision."

The military has launched an investigation into how a U.S. contractor received fatal head wounds while working with special operations Marines in Irbil, Iraq, according to three U.S. officials familiar with the investigation.
The Lockheed Martin employee died at Landstuhl Regional Medical Center in Germany last week, just days after he was found in his barracks room with severe head trauma, according to two U.S. officials.
Now, the Naval Criminal Investigative Service (NCIS) is looking into what two Marine Raiders and one U.S. Navy Special Amphibious Reconnaissance Corpsman know about his injuries and whether a fight on New Year's Day is where he suffered the fatal blows, according to three U.S. officials familiar with the investigation.

News of the incident in Erbil comes as elite U.S. forces are under multiple investigations for deadly misconduct.
On Friday, a U.S. Navy SEAL pleaded not guilty in the stabbing of an Islamic State teenage fighter in Iraq in 2017. And in December, President Donald Trump said he would review the case of a former U.S. Green Beret charged with the murder of a suspected Taliban bomb maker in 2010. In November, two SEALs and two Marines were charged with murder and involuntary manslaughter in the death of Army Green Beret Staff Sgt. Logan Melgar in Mali in June 2017.
This spring, a Department of Defense report is due to the Senate and House Armed Services Committee on ethics and standards in the special operations community.


While Congress awaits that report, a number of its members consider running for the presidential nomination of their respective party.  One example is Senator Elizabeth Warren.  Christina Wilkie (CNBC) reports:

Warren, like most Democrats, has been quick to criticize Trump's methods. But she shares his skepticism of the wars in Iraq and Afghanistan and supports the return of U.S. troops from both theaters.
In November, Warren wrote a major essay in Foreign Affairs magazine, where she described the Middle East as a "tangled mess," and concluded that "neither military nor civilian policymakers seem capable of defining success, but surely this is not it."

Warren did not, however, offer her own vision of what success in the region would look like. And absent this vision, Warren, like Trump, seemed to favor withdrawal without an emphasis on longer-term strategic objectives.

Her message: Such a rise is rarely possible anymore.
"When I was a kid, a minimum wage job in America would support a family of three," she said several times during the Iowa visit. "Today, a minimum wage job in America will not keep a mama and a baby out of poverty.”
For Warren, the Washington of today doesn't work for the little guy -- a message not unlike Sen. Bernie Sanders', who did well in Iowa in 2016.
"Why has America's middle class hollowed out? Why is the path so rocky for so many people and so much rockier for people of color? Why has this happened in America?" Warren said at multiple stops. "It's corruption, plain and simple."


Will the senator use her anti-corruption message to note the billions flowing into these endless wars?  The lack of social services at home because of all the War Profiting?  It remains to be seen.  But she better figure out that foreign will matter in 2020.  The issue of the standing of the United States in the world will be an issue.  Are we better off now than we were four years ago?  That question will be framed not only from a domestic point but also from an international one.  She needs to be combining her messages now before she's reduced -- and her own party will do this to her, if given the chance -- as a domestic senator who doesn't grasp the way the world works.

With Elizabeth Warren announcing her run for President, And Joe Biden rumored to announce he is running in next few weeks. Who out of top 4 Democrats would you VOTE for in the 2020 Democratic Primary? #2020Poll #2020DemocraticPrimary #Warren2020 #Biden2020 #Bernie2020 #Beto2020
71 replies329 retweets200 likes


Joe Biden's day is over.  He chose to stand with Bully Boy Bush, to honor him.  There's not a comeback from that.

Joe was never popular enough on his own to make it through the primaries -- despite repeated runs -- failed runs.  The one thing he had going for him was that some saw Barack's administration as a repudiation of Bully Boy Bush.  But now that Joe's handing out awards to Bully Boy Bush, he doesn't even have that.

Beto needs to present himself in the manner he did in Congress when critiquing the 'progress' in Iraq.  He comes off mature in those moments and wise -- saddened but wise.  Is it sincere? I have no idea but I've been at multiple hearings where Beto spoke of the Iraq War and he can create quite a spell on those assembled when he plays the grown up in the room.

Bernie is Bernie and if he runs will have his own base in place.  Already people are gaming ways for him to increase his chances.

Replying to @Atrios
..but but but if he takes 37 yr old Tulsi Gabbard as his running mate he'll be fully hedged. Beauty and the Beast. Young Surfer and Old Gheezer. Voluntary Tours in Iraq vs Draft Dodger. Liberal Hawaiian and Semi Liberal EastCoaster, etc. 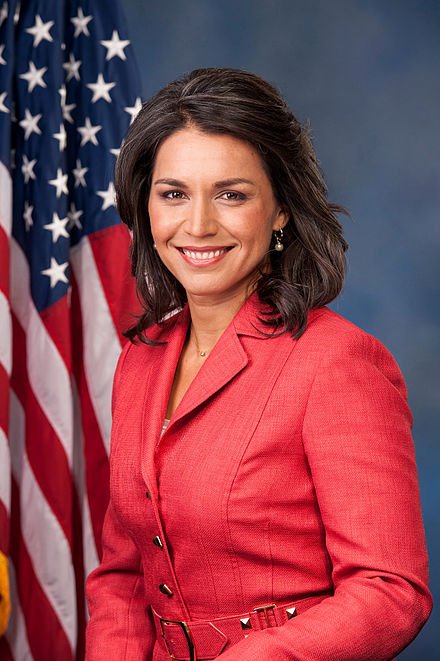 
Tulsi is already the target of attacks encouraged by the DNC.  It'll be interesting to see how she weathers the attacks.  It'll be interesting to see whether so-and-so-who-you-have-never-heard-of-says-she-is-attached-to-groups-you've-never-heard-of-and-honest-to-heaven-though-it-looks-like-this-is-an-attack-on-her-religion-we-swear-it's-not works as a smear strategy.  She's a threat to many in power because of her foreign policy vision.

Senator Corey Booker plans to run as well in an effort to apparently represent corporations and revive triangulating.  No doubt, he's prepping a new book with Al Gore, RE-REINVENTING GOVERNMENT: HOW IT DOOMED THE COUNTRY IN THE 90S BUT WILL REALLY WORK THIS TIME!

Senator Kamala Harris is also said to be potential contender.  Her biggest obstacle?  A lack of record to run on.  No, "I'm tough on crime" is not going to appeal to the Democratic base or the left which has grasped just what a trap are prisons are.  She has the most to overcome because everyone of her cases becomes a potential minefield as the press rushes to examine them.  And that's all she's got to run on.  She's not distinguished herself during her brief time in the Senate, she's not given any impassioned speeches on workers or wars.

There will be others from the Democratic Party who consider running, the Republicans will put up their own candidates -- Trump will most likely be the GOP's 2020 candidate but that will probably lead to some Republican running as a third party candidate.  In addition, there are smaller parties -- Greens, Libertarians, etc. who will be putting people forward for Americans to consider supporting.

Dropping back to a past administration, when we noted that Barack Obama had to downplay (conceal) the fact that he put a Jewish woman over Iraq on the National Security Council, a few people missed the point.

Iraq and the Jews is not a pretty story.  The property of Jews in Iraq was confiscated.  When some of it surfaced decades later, the Iraqi government insisted it belonged to them (the Iraqi government).  Since the start of the Iraq War in 2003, Jews in Iraq have not only been targeted, they've been driven out of Baghdad (there are reports that one elderly Jewish man remains in Baghdad).  Iraqi media is frequently filled with reports that maintain Israel destabilized the region and the country.

If you doubt how huge the conflict remains, this week reports surfaced that Iraqi officials had met with Israeli officials.  Outside of Iraq, this was touted as signs of progress or growth or something.

The Iraqi parliament yesterday demanded a probe into reports that three delegations of Iraqi leaders visited Israel.
In a statement yesterday, First Deputy Speaker of the Iraqi parliament Hassan Karim Al-Kaabi called for “an investigation to identify those who went to the occupied territory [Israel], particularly if they are lawmakers.” Al-Kaabi added: “To go to the occupied territory is a red line and an extremely sensitive issue for all Muslims,” the Times of Israel reported.
Meanwhile, other Iraqi officials claimed that the visit – in which several delegations of Iraqi leaders allegedly travelled to Israel – did not take place at all. The New Arab claimed that an unnamed Iraqi cabinet official had told the newspaper in a phone call yesterday that the claim of a visit was “misleading”. The cabinet official added: “The information we have asserts that no one has left Iraq to visit the Zionist entity.”

Meanwhile, more problems for Iraq.  Recently, there were all the dead fish that turned up floating in the rivers.  Now?


What a disaster! 4000 Tomato farms in Basra were damaged by unknown infection!
4 replies1 retweet4 likes


Is it related to water poisoning? I hear the canals in Basra are filled with rubbish & the water is polluted. Such a shame.
1 reply0 retweets0 likes

Replying to @MinardGlen
First the fish now farms. We don't know what is happening in Basra to be honest. Since the protest and the city gets more disasters!
2:49 PM - 7 Jan 2019
1 reply0 retweets0 likes

Replying to @MosulEye
What a shame. I heard it used to be a beautiful city once. Hopefully it will again, when the pollution & the corruption is cleaned up.
0 replies0 retweets1 like