Emmy nominations that should have been

From "The Acting nominations that should have been" that we did at Third:


Those are strong nominees.

And Freya deserved to be nominated (Riley Voelkel).

Read the article to see our other picks.


That passes for 'liberation' in Iraq.

And The Mosul Slog continues.

An Iraqi security member was killed on Monday during clashes with remnant Islamic State militants in western Mosul’s Old City, a security source was quoted saying.
Shafaq News quoted the source saying that a soldier was killed and another was wounded during operations targeting the remaining havens in Shahwan neighborhood in the Old City.


Looks like that announcement last Tuesday that The Mosul Slog was ended was premature.

As was the victory parade over the weekend.

Checking Elise Labbot's Twitter feed for her response and there is none.  Elise infamously yelled out "NO!" in a State Dept press briefing when another journalist dared to suggest that Mosul was a slog.


Elise does offer this nonsense.

Neither offered anything but hubris.

That's the safety net, note, that held up his ass.

But he didn't give a damn about single mothers when he was president.

He was raised by one who depended on the safety net.

But his hubris was unbound.

There's also the Iraq sanctions which killed at least a half million children in Iraq.

Then there's War Criminal Bully Boy Bush who started the Iraq War -- the one that's never ended to this day.

Bully Boy Bush was never one to show humility.

He was a vengeful, angry child.


As bad as Donald Trump is, he's not Bully Boy Bush.

He may become him.

But, at his worst, Donald's a petulant adult.

Bully Boy Bush was (and remains) a petulant child.


INTELLIGENCE POST offers a look back at Iraq which includes:

In 2011, it was clear that Iraq was repeating its history, with slight modifications. Corruption was deeply entrenched in all institutions, from security and political establishment, to bureaucratic and service providing sector, relying on political, sectarian, and ethnic identities and allegiances. The government continuously interfered with the judiciary, while institutions in charge of checks and balances were either never formed or faced pressure and violence. Key elements of the power-sharing agreement reached in 2010 were never carried out. After Vice President, Tareq al-Hashimi was arrested (many believe for publicly criticizing al-Maliki), his opponents among Sunnis, Kurds and Shi’ites grew dissatisfied. The standoff with the Kurdish government continued well into 2012.
As Al-Iraqiya, a secular cross-confessional movement, fell apart due to internal rivalries and a lack of an assertive stance in fighting al-Maliki’s growing authoritarianism, numerous Sunni Arabs who identified with their ideology started peaceful protests. On top of the stand-off between al-Hashimi and al-Maliki, the triggering event was the arrest of the bodyguards of a prominent Iraqiya member. The government responded with bureaucratic procedures, refused to negotiate directly and ultimately deployed security forces in Sunni neighborhoods.
In this stand-off, coupled with the Syrian civil war escalation spilling over to Iraq, radical voices gained prominence, giving the government an excuse to storm a camp in Hawija, killing more than 50 people and injuring 110 more. At the same time, the Iranian Revolutionary Guards, alarmed by developments in Syria, recruited young people and ex-insurgents into militias, which were deployed to Syria. Retaliatory sectarian violence soon spiraled out of control, with 2012 ending with more than 4,600 civilian deaths, mainly in terrorist attacks claimed by ISIS and Al-Qaeda. In 2013, the death toll doubled, with more than 9,800 victims, according to ICB. Al-Maliki was ultimately unseated and replaced by Haider al-Abadi after newly elected president Fuad Masum nominated him for that position.


That's when the Islamic State took root in Iraq.

And none of the conditions that allowed ISIS to rise have been addressed.

Mosul's not liberated but it is destroyed. 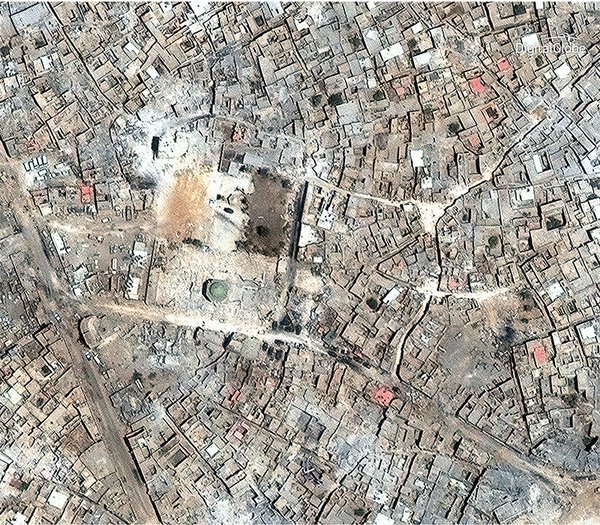 That's how a lot of Iraq will look if the conditions are not dealt with.