I wouldn't doubt this, would you?

And that's why the media needs to follow rules.

When they lie and scheme, there's no reason to believe them.


There's not an American breathing who shouldn't be able to sense just how much the media hates Donald Trump.

And they've done one imploding 'report' after another.

So we're now to the point of "Who cares?"

Do I give a crap if Donald Trump Jr. did something wrong?

(To be clear, I don't think he has based on the coverage I've read at Consortium News and at Jonathan Turley's webblog.)


They've overplayed their hand and exhausted our patience.

The press should have played fair.

They've destroyed their own reputations.

Wednesday, July 12, 2017.   Chaos and violence continue, a new leader of the Islamic State may or may not have emerged, Amnesty Internationl's charge of War Crimes gets some attention, IRAQI DAY publishes a photo that goes to the heart of the charges (though they fail to grasp reality), Brett McGurk prepares to dupe the Kurds and much more.


Apparently, everyone wants to make like Sandy Denny and since "Peace In The End" (the song she and Trevor Lucas wrote for their group Fotheringay).  Well keep singing the lovely song and, as they note in those anonymous meetings, "it works if you work it."  Maybe someday.

Link to headline article
Senior ISIS member 'declares himself new caliph' in IraqAbu Haitham al-Obaidi, Islamic State deputy mayor in Hawija in northern Iraq, has 'declared himself the new caliph' amid reports of Abu Bakr al-Baghdadi's death in a…

Yes, we've been here before -- many times before.

At present, there is no confirmation of the death -- although at this point, with so many earlier reported deaths, I don't know what form of confirmation would be required.  It's the story of the little boy who cries wolf over and over only to not believed when a wolf finally does emerge.


After noting the rumors of al-Baghdadi's death, HEAVY notes:

Abu Haitham al-Obeidi means “Father of Young Eagle” and may be derived from Malik ibn al-Haytham al-Khuza’i, an important figure in the Abbasid Revolution which fought and defeated the Umayyad Caliphate of Iran shortly after the spread of Islam.


The Islamic State has not been defeated in Iraq. 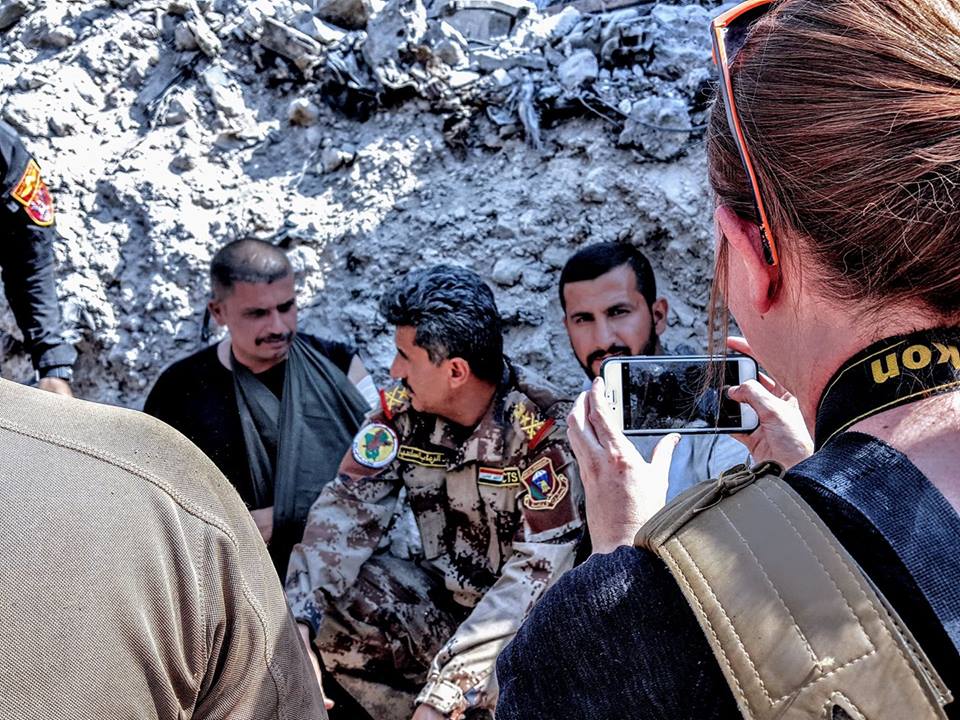 . . . but the Islamic State has not been defeated in Iraq.

You need to dig a little deeper.


That 'success' in Mosul?


This city, which three years ago had a population of nearly two million, has been subjected to a murderous siege that dragged on for nearly nine months. The scenes of destruction in Mosul are comparable only to the kind of devastation that was wrought upon European cities in the Second World War. The Old Town of western Mosul, the heart of this ancient city, has been largely flattened by US missiles, bombs and shells, with hardly a single residential or commercial building left intact.
The crimes carried out against the civilian population are on a Hitlerian scale. Close to one million people have been driven from their homes. Those trapped in the city were subjected to a continuous bombardment by US warplanes, attack helicopters and heavy artillery. Early on in the siege, the destruction of basic infrastructure and the cutting off of all supply routes deprived hundreds of thousands of men, women and children of electricity, clean drinking water and access to adequate food and medical care.
The total number of dead and wounded may never be known. Buried in the reports of the victory celebrations by the US-backed Iraqi forces is the grim fact that these troops were dancing on rubble amid the unmistakable stench of rotting corpses.
The monitoring group Airwars has documented the deaths of 5,805 civilians as a result of attacks launched by the US-led “coalition” between February and June of 2017. There is no doubt that this figure, which excludes casualties during the first four months of the siege as well as those resulting from the intense bombardment of the past three weeks, is a serious underestimate. Tens of thousands more have been wounded.
Among those escaping from the besieged city, boys and men were treated as ISIS suspects, in many cases subjected to interrogation, brutal torture and summary execution, all under the approving eyes of American Special Forces “advisers.”

Amnesty International issued a report Tuesday titled “At Any Price: The Civilian Catastrophe in West Mosul,” in which it recounted that civilians were subjected “to a terrifying barrage of fire from weapons that should never be used in densely populated civilian areas.”

The report also focuses on the human cost of the U.S.-led coalition's actions in Mosul. Amnesty interviewed 150 witnesses, experts and analysts about dozens of attacks, and focused on a pattern of attacks that took place between January and July 2017.
"The horrors that the people of Mosul have witnessed and the disregard for human life by all parties to this conflict must not go unpunished," says Lynn Maalouf, Amnesty's director of research for the Middle East. "Entire families have been wiped out, many of whom are still buried under the rubble today. The people of Mosul deserve to know, from their government, that there will be justice and reparation so that the harrowing impact of this operation is duly addressed."


Amnesty said Iraqi forces and the coalition had carried out a series of unlawful attacks in west Mosul since January, relying heavily on Improvised Rocket Assisted Munitions (IRAMs), weapons with crude targeting capabilities that wreaked havoc in densely populated areas.
"Even in attacks that seem to have struck their intended military target, the use of unsuitable weapons or failure to take other necessary precautions resulted in needless loss of civilian lives and in some cases appears to have constituted disproportionate attacks," the report said.

Yet some don't even grasp what they see with their own eyes. 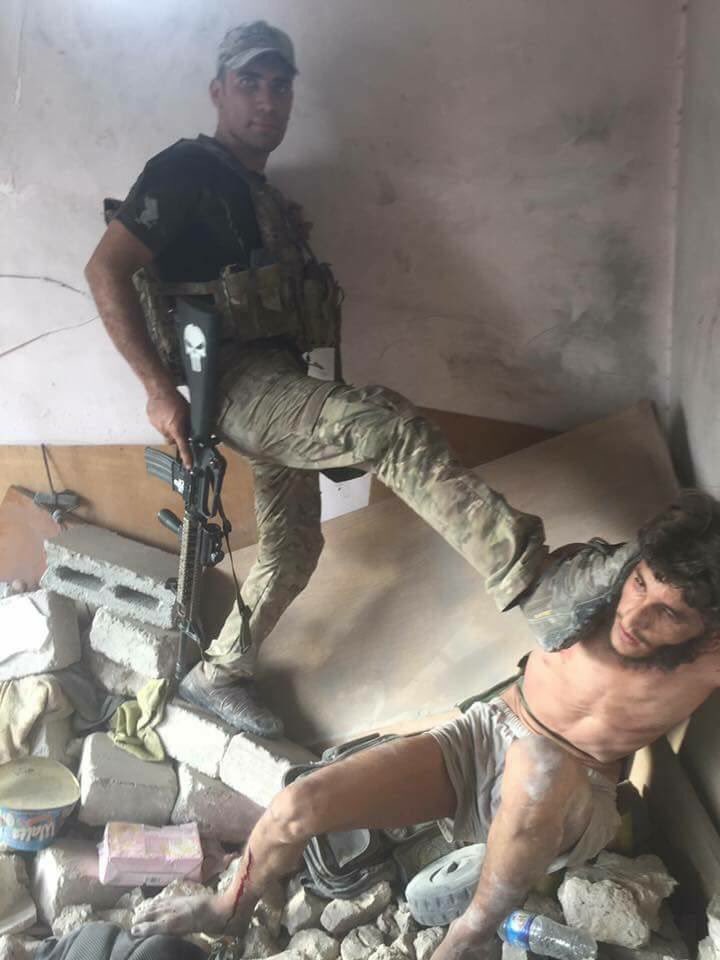 
The man in the photo above, who may or may not be a member of the Islamic State,   He has his hands secured behind his back and is in nothing but his underwear.

The War Criminal, by contrast, is heavily armed and placing his foot on a prisoner while posing for photos.

Which goes to how f**ked up things are in Iraq.

IRAQI DAY is a moderate site.

But they see this as a photo worth sharing.

And attach a 'quip' to it to spread the laughs.

"Cooperation on vital issues" will be led by "Iraq's oil minister."

Is oil an issue in the chasm between the central based government in Baghdad and the KRG?

But the KRG has announced a move towards independence.

Any effort to derail that -- which is what this appears to be -- will result in a perception that certain KRG officials took a bribe, sold out the long held dream of Kurdish independence -- and a Kurdish homeland -- for a few dinars.

What would this accomplish?

As Brett knows full well, it would not only halt the legal moves towards Kurdish independence, it would also toss the northern region into chaos as the people turned on their leaders.

Don't forget that the party Goran was a creation of the CIA.  It would be the most likely to benefit from this.

But just destabilizing the Kurds would be enough.

It's been the tactic of the US government since the days of Henry Kissinger.


In 1972, Dr. Henry Kissinger met with the Shah of Iran, who asked the U.S. to aid the Kurds in their rebellion against Iraq, an enemy of the Shah.  Kissinger later presented the proposal to President Nixon who approved what would become a $16 million program.  Then John B. Connally, the former Nixon Treasury Secretary, was dispatched to Iran to inform the Shah, one oil man to another.
The committee report charges that: "The President, Dr. Kissinger and the foreign head of state [the Shah] hoped our clients would not prevail.  They preferred instead that the insurgents simply continue a level of hostilities sufficient to sap the resources of our ally's neighboring country [Iraq].  The policy was not imparted to our clients, who were encouraged to continue fighting.  Even in the context of covert action, ours was a cynical enterprise."
During the Arab-Israeli war, when the Kurds might have been able to strike at a distracted Iraqi government, Kissinger, according to the report, "personally restrained the insurgents from an all-out offensive on the one occasion when such an attack might have been successful."
Then, when Iran resolved its border dispute with Iraq, the U.S. summarily dropped the Kurds.  And Iraq, knowing aid would be cut off, launched a search-and-destroy campaign the day after the border agreement was signed.
A high U.S. official later explained to the Pike committee staff: "Covert action should not be confused with missionary work."

Trickery and deceit have been the hallmarks of the US government's relationship with the Kurds for decades.

South Central Michigan Greens
=============================
Calhoun, Hillsdale, and Jackson Counties Local
https://www.facebook.com/SCMiGreens/
People and planet over profit.
FOR IMMEDIATE RELEASE:  July 5, 2017
For more information:
--------------------
Monika Schwab, Local Contact/SCMiGreens
Moni.schwab@icloud.com
South Central Michigan Greens to Discuss Reaching Out
to the People 3-5pm July 22 at Albion Biggby's
==============================================
The South Central Michigan Greens local will discuss events, canvassing,
and other ways to reach out to people in the three-county area at the
group's next monthly meeting 3-5pm on Saturday, July 22 at the Albion
Biggby's, 217 East Michigan Avenue.
Calhoun, Hillsdale, and Jackson County members of the Green Party of
Michigan -- and others who agree with the party's values -- are invited
to come and bring information about events in their area.
John Anthony La Pietra of Marshall, longtime Elections Co-ordinator for
the state party and the Green nominee for Michigan House District 63
last year, will talk up some upcoming events near him in central and
eastern Calhoun County.
"Marshall has the Calhoun County Fair next month and the 54th Annual
Historic Home Tour September 9-10.  Albion has the Festival of the Forks
September 15-17, and the Fall Festival at Homer's Blair Historical Farm
is September 23."
La Pietra also wants to invite Greens and other supporters of working
people to join a Labor Day walk September 5 connecting Marshall's two
historical monuments to the labor movement.
Information about canvassing door to door to share views on issues was
presented briefly at last month's meeting June 24 at the downtown branch
of the Jackson Coffee Company.  This month, La Pietra hopes, the
discussion will expand to how, when, and where to do some canvassing
locally.
The South Central Michigan Greens local was formed earlier this year to
bring together Green Party members and supporters at monthly meetings
held around the three-county area.
For more details and news about the South Central Michigan Greens,
please visit the local's Facebook page:
https://www.facebook.com/SCMiGreens/
#  #  #
The Four Pillars of GPMI:
Grassroots Democracy
Social Justice
Ecological Wisdom
Non-Violence
For our Ten Key Values, add:
Community-Based Economics
Decentralization
Feminism
Future Focus/Sustainability
Personal and Global Responsibility
Respect for Diversity