Scary but, sadly, not surprising.

Tuesday, December 20, 2016.  Chaos and violence continue, War Hawk down as Hillary Clinton loses in the Electoral College, and much more.


Yesterday, in the United States, the Electoral College voted.  Despite the Tweets of a lot of lunatics like Debra Messing who don't even know how the law works, Hillary Clinton was not declared president.  In January, Donald Trump will be sworn in as President of the United States.


It was a historic humiliation.

For a historically unpopular candidate.

Turns out Barack Obama's biggest lie in 2008 may not have been his 'promise' to end the Iraq War.


No, his biggest lie might have been his "you're likable enough" remark to Hillary.

She was incredibly unlikable and became the least popular candidate the Democratic Party has ever run.

They thought it didn't matter.

The party thought all they had to do was scare the people regarding Donald Trump. 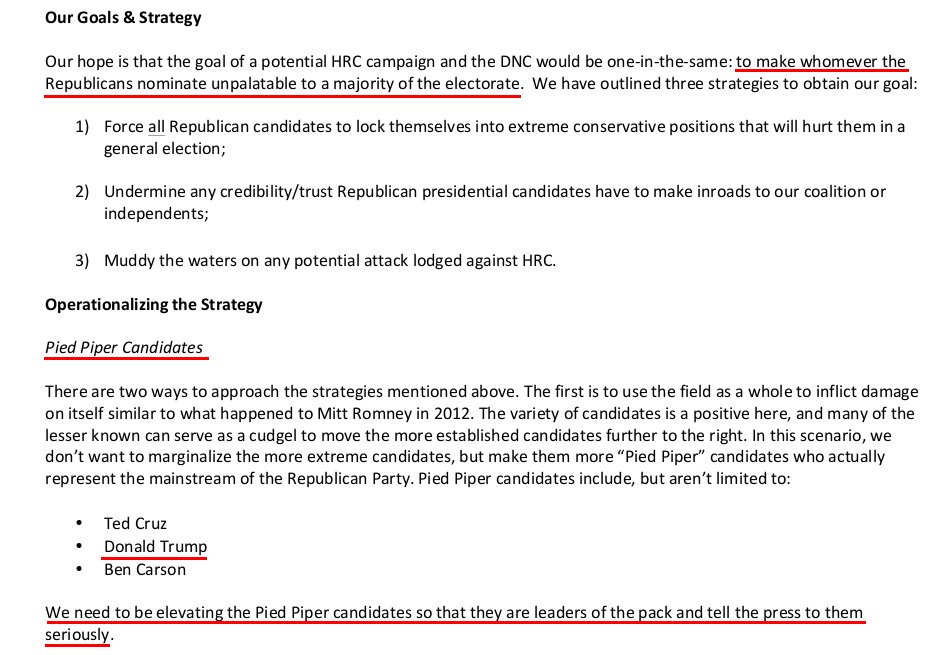 But the Democratic Party's been running on fear -- not ideas -- for one election too many and, in 2016, fear wasn't a large enough motivating factor.

In the presidential race, the Democratic Party won the popular vote.

People voted for the party, not the candidate.

This had nothing to do with James Comey or the FBI or WikiLeaks or even closet case Donna Brazile feeding her questions ahead of the debate.

These were the impressions of her going in.

B-b-but she was in the most admired women in the Gallup poll.

And people hiding behind that nonsesne ignored the polls about the candidate Hillary Clinton.

Despite being so historically unpopular, they were able to scare and guilt a number of people into voting Democrat.

And this nonsense about she won 3 million more in the popular vote!!!

She had the media on her side.  Never before has the corporate press treated a candidate from one of the two main political parties so poorly.  THE NEW YORK TIMES had their editor boasting of the change in their treatment -- how they would use "liar" for Donald Trump.  You had people lying about him non-stop.  (As Dave Chappelle pointed out publicly, "the media twisted" the coverage of the audio tape.)

They repeatedly lied about him.

Of course, she had the neocons behind her, she's a War Hawk.

And that's the reality that Rosie O'Donnell, Debra Messing, Martha Plimpton and hundreds of others couldn't get honest about.

I was.  She finally said it was a "mistake."  That's historic for Hillary who never admits to any mistake.  (I know the woman, I've known her for years.)

She voted for the Iraq War but finally said it was a "mistake."

But then she became Secretary of State and wanted more war.  Libya is destroyed.  She wanted to do the same to Syria and whispered to the press to discredit Barack's reluctance and to try to embarrass him into full out war with Syria.

That's what she did.  She knows it, many in the press know it.

She picked at a moment of honesty.

No longer was her vote for the Iraq War just a "mistake."

No, she said it was a "mistake" because she'd trusted Bully Boy Bush.

Then it got worse.

It was a "mistake" because she'd trusted that Bully Boy Bush would send a larger number of US troops into Iraq.

By the time she's saying that, her admission in the 2008 race is now meaningless.

And shame on Rosie O'Donnell who knows the Iraq War was much worse than a "mistake" for providing cover for Hillary.

Thousands of foreign troops -- US, British, Australian, etc -- and millions of Iraqis are dead because of the Iraq War.

It is an illegal war.

It is a war based on lies.

And, by the time she was trying to become president in 2016, Hillary had 'modified' her "mistake" to she made an error in assuming that Bully Boy Bush would send in more troops than he did.

She is a horrible, horrible woman.

Is Donald Trump a horrible man?

He may very well be.  (I don't like Donald.  I've never liked him.)  But if he is, if, even now he's not responsible for the deaths of millions.

So he starts off the presidency on better footing than she would have.

The media doesn't get it.

Not in the UK.

They keep thinking they can smooth Iraq over.

Iraq is a turning point for a generation that came of age during it.

It hits the 14 year mark in March.

People in first grade when it started are now working jobs and/or in college (probably both).

The Iraq War is not a minor point.


The press wishes it were so that they could sweep it under the carpet.

They love a Hillary or a Tony Blair.

But reality shows that these War Hawks are not beloved by the public.


Some pin all the blame on Bully Boy Bush.

That fails to note that Hillary voted for it, supported it, defended it to the press and all that just before it started.  She continued to do so for years and years.

But let's pretend the lie is true: Bully Boy Bush started the Iraq War all by himself.

(Hint to the anti-Trump crowd -- portray him as a corrupt, not as dumb.  No one holds the stupid accountable.)

But Hillary and Tony were supposed to be smart, the press portrayed them as such.

They were supposed to be experienced.

So, yes, the Tony Blairs and Hillary Clintons will always bear more resonsibility than some deeply dumb moron who, on a good day, almost managed to string together enough words to make a sentence.

She cannot be repackaged.

But, like a good con artist, he did know how to communicate (or fool).  And he knew he had to disown his support for the Iraq War.

Hillary didn't get it.

Hillary being so awful does not make Donald Trump good.  This isn't a see-saw at a park.

But Hillary being Hillary did make Donald Trump the next president of the United States.

It would be great if all her temple prostitutes could follow her back to the temple and she could spend the rest of her life, like Bully Boy Bush does, hiding under a rock.

She's a disgrace and responsible for the deaths of millions.


She had no time to help women in her career, but she always had time for the corrupt.


Dropping back to the September 22nd snapshot: 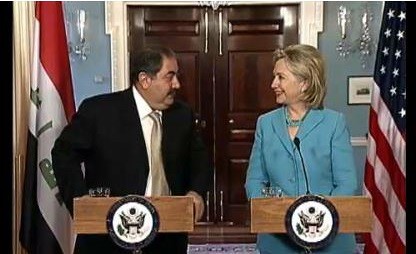 That's Zebari in better times pictures with his good friend and colleague Hillary Clinton.  Yesterday, he was voted out as the Minister of Finance in Iraq due to corruption.

Erika Solomon's piece for THE FINANCIAL TIMES OF LONDON has a headline echoed by some other outlets "Zebari no-confidence vote puts Iraq economy at risk."

If you've paid attention to Iraq, you're going to be rolling your eyes and laughing at what whores the press can be.

Oh, the horror, Iraq has no Minister of Finance!!!!!

You'll probably be thinking, "Wasn't Haider al-Abadi trying to get a brand new cabinet?  So doesn't this ouster go along with what he's called for and what the US government has backed?"

If you've really been paying attention, though, you'll probably be thinking back to November 2010 and how Nouri al-Maliki (re-installed as Iraq's prime minister by US President Barack Obama via The Erbil Agreement) was supposed to form a Cabinet.

Then how in January of 2011, he still didn't have a Minister of Defense.

Nouri al-Maliki went his entire second term without a Minister of Defense, from 2010 to 2014.

Now how did the Iraqi military end up in such poor shape that it ran from one 2014 battle after another?  That the only time it had the will to attack was when it was attacking Iraqi civilians?

We pointed it out repeatedly in real time.

Where was the press then?

For the longest time they were lying.

They were pretending Saadoun al-Dulaimi was heading the ministry.  He wasn't.

He was Nouri's glorified personal assistant.

He had no power and he was never confirmed by the Parliament -- because Nouri never nominated him for the post.  (Do not e-mail that he was confirmed December 21, 2010 -- that was for the post of Minister of Culture.)

Again, the press had no concern that Iraq had no Minister of Defense for approximately four years.

As the country fell into further chaos, they expressed no concerns.

Wednesday, Hoshyar's voted out due to corruption and before nightfall western outlets are in a tizzy and insisting this could greatly harm Iraq.


Iraq’s former Finance Minister Hoshyar Zebari has lost an appeal at the country's federal court against his removal as minister by the parliament which he called unconstitutional.

The former minister lost his appeal 6 to 3 votes on Tuesday.

The Iraqi parliament withdrew confidence from Zebari in September.


“Unfortunately lost our appeal to Iraqi Federal Court 6 by 3 votes.” Zebari reacted on his tweeter account. "Now I’m a private citizen after 13 years working for the new Iraq.” he added.


And here's the Tweet announcing Iraq's liberation from at least one corrupt politician:

All the operation can boast of is creating refugees.

During winter in Iraq, no less. 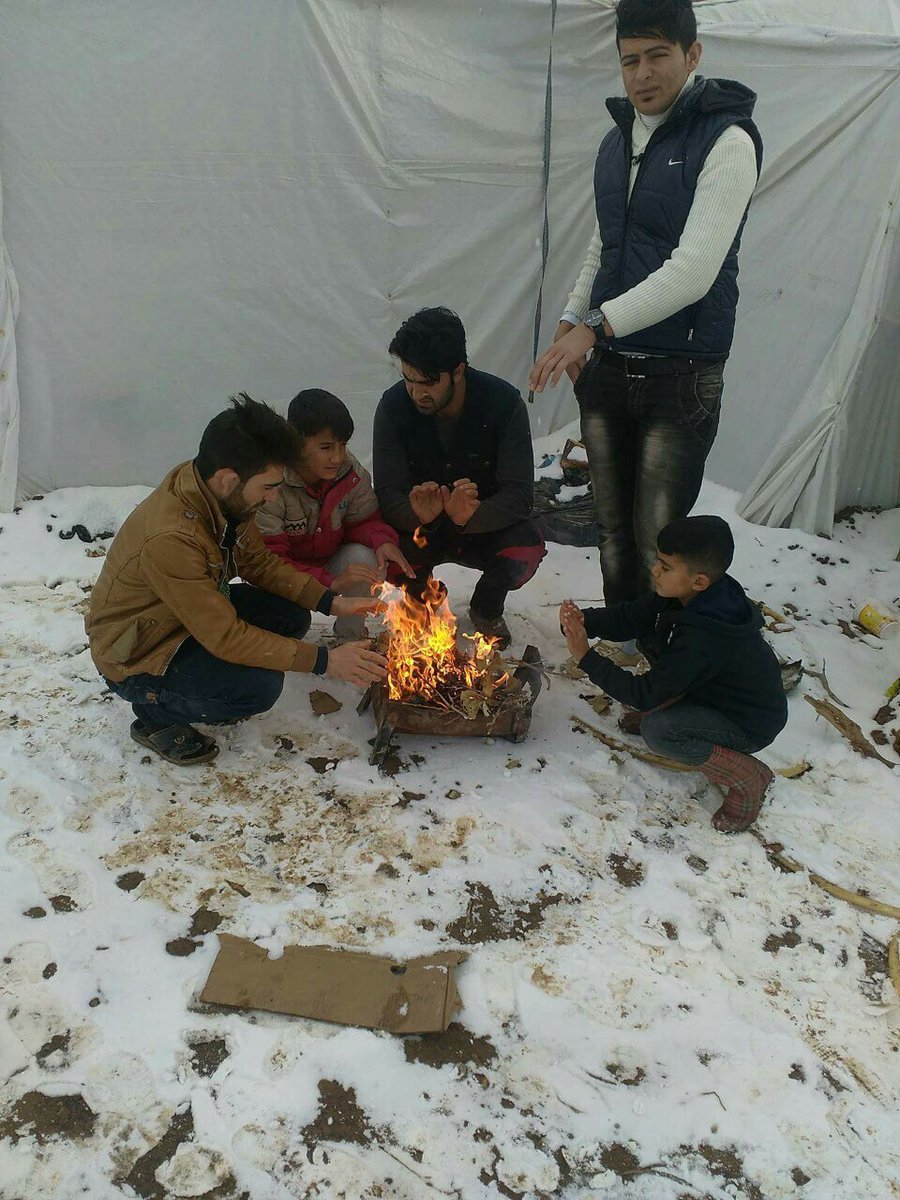 
Nearly fourteen years later, the Iraq War continues with no end in sight and -- even at Christmas time -- apparently no compassion for the victims -- the ongoing victims of the ongoing war -- judging by the lack of attention from the US media to their plight.