Are libraries for the police or for the people?

You know I love to read, so when I saw this at In These Times, I knew I'd have to highlight it here:

A patron at the Dallas Public Library sits at a computer, talking to himself loudly. A few people complain, but he refuses requests from a library worker and a security guard to lower his voice. He also refuses to leave, then grows belligerent. So the security guard calls the police.
Police stun him with a Taser, then take him away.
“It was terrifying and traumatic,” says Pat Arreguin, a Dallas library worker at the time. ​“This did not need to go this far.”
Public libraries have, in many places, become a last refuge for people without other access to basic resources — a place to use a computer, read and write, rest.
Addressing the needs of these patrons — who may be experiencing homelessness, for example, or navigating drug abuse problems — requires training for the library staff (including how to handle sexual harassment and mental health-related out- bursts), not the heavy hand of the law, according to Arreguin.
Denver offers one example of how this concept might work. In 2015, Denver began using social workers as auxiliaries to librarians to help patrons find housing, healthcare and other services, and to administer Narcan to prevent opioid overdoses.
“To see how [social workers at the libraries] de-escalate a situation has been incredible,” says Denver Councilwoman Candi CdeBaca, a former social worker who became the council’s first democratic socialist in 2019. ​“I’ve witnessed it firsthand. And they do exactly in the libraries what we would like to see on the streets.”
There is a growing national movement of abolitionist library workers who want law enforcement out of libraries, and it has seen some success in St. Louis County, Mo. For years, county librarians worked alongside armed, uniformed, off-duty officers from St. Louis County and other municipal police departments, hired by a private company to guard six of the library’s 20 branches, five in majority-Black neighborhoods.

It's from a report by Jason Christian. I love books. I love libraries. They should be safe places for all. Sometimes people are noisy. We just make do. If a kid has Tourette's you shouldn't kick him or her out of the library. If someone's being loud, well that's why you take your ear buds with you.

Tasering a patron? That is outrageous. Libraries should be open to all, knowledge and entertainment should be available to all.

Monday, August 23, 2021.  More problems emerge in Iraq and, try not to notice, all are connected to the Turkish government's actions.

More than 12 million people in Syria and Iraq are losing access to water, food and electricity and urgent action is needed to combat a severe water crisis, 13 aid groups working in the region warn today.

Across the region, rising temperatures, record low levels of rainfall, and drought are depriving people of drinking and agricultural water. It is also disrupting electricity as dams run out of water, which in turn impacts the operations of essential infrastructure including health facilities. Higher temperatures caused by climate change increase the risks and severity of droughts.

More than five million people in Syria directly depend on the river. In Iraq, the loss of access to water from the river, and drought, threaten at least seven million people.  Some 400 square kilometres of agricultural land risk total drought. Two dams in northern Syria, serving three million people with electricity, face imminent closure. Communities in Hasakah, Aleppo, Raqqa and Deir ez Zour, including displaced people in camps, have witnessed a rise in outbreaks of water borne-diseases such as diarrhoea, since the reduction in water.

In Iraq, large swathes of farmland, fisheries, power production and drinking water sources have been depleted of water. In the Ninewa governorate, wheat production is expected to go down by 70 per cent because of the drought, while in the Kurdistan Region of Iraq production is expected to decrease by half. Some families in Anbar who have no access to river water are spending up to USD80 a month on water.

“The total collapse of water and food production for millions of Syrians and Iraqis is imminent,” said Carsten Hansen, Regional Director for the Norwegian Refugee Council. “With hundreds of thousands of Iraqis still displaced and many more still fleeing for their lives in Syria, the unfolding water crisis will soon become an unprecedented catastrophe pushing more into displacement.”

CARE’s Regional Director in the Middle East and North Africa, Nirvana Shawky, said: “The situation demands that authorities in the region and donor governments act swiftly to save lives in this latest crisis, that comes on top of conflict, COVID-19 and severe economic decline. In the longer term, beyond emergency food and water, they need to invest in sustainable solutions to the water crisis.”

The Danish Refugee Council’s Middle East Regional Director Gerry Garvey said: “This water crisis is bound to get worse. It is likely to increase conflict in an already destabilized region. There is no time to waste. We must find sustainable solutions that would guarantee water and food today and for future generations.”

In Al Sebat, 30 km away from Hasakah, residents have seen scores of villagers leaving to other areas, forced out by the drought.

“This year we have witnessed a wave of intense drought and as a result our lands did not produce any crops and we don’t have any sources of drinkable water either for us or for our animals,” said Abdallah, a tribal leader from Al Sebat. “It is infuriating to think that the current conditions will force us to leave the rural areas and that our lands will be left as ruins.”

Many farmers have spent their savings and gone into debt to keep their animals alive.

“Because of the drought I was unable to harvest any wheat,” said Hamid Ali from Baaj, one of the worst affected districts in Ninewa, Iraq. “Now I am overwhelmed with debt.”

The 'success' that is Iraq -- according to War Criminal Paul L. Bremer.

Post-government life as a ski bum apparently didn't work out for Paul so he returned with a column for THE WALL STREET JOURNAL that was filled with lies -- see "A War Criminal Returns."

The media's in a panic that the American people might catch on to reality so they're working overtime to hold on to US control of Iraq.  They're in panic mode as they cringe and gasp and cry about what's going on in Afghanistan -- refusing to tell you that this was always the way US military in Afghanistan was going to end.

Fearful Americans might catch on to reality, Paul shows up to insist that Iraq is a success.   And to prove that THE WALL STREET JOURNAL has no fact checkers and will print any garbage submitted to them.

An Iraqi delegation will visit Turkey early next month as water levels in the Tigris and Euphrates rivers have decreased by more than 50 percent, spokesperson for Iraq’s water ministry told state media on Sunday.

“This year is a water scarce one and there is a clear decrease in water levels in the Tigris and Euphrates rivers, to a point that their water levels have dropped by more than 50 percent. That is in addition to a major drop in the water levels at Dukan, Darbandikhan, Sirwan, and Diyala dams,” spokesperson Ali Radhi told state media.

The Tigris and Euphrates both have their sources in Turkey and pass through Syria before joining together in Iraq and spilling into the Persian Gulf. They are important water resources for all three nations.

“Many meetings have been held with the Turkish and Syrian sides on the water issue, and there is an expected visit of an Iraqi delegation to Turkey at the beginning of next month in order to continue talks on Iraq’s share of water and the situation of the Tigris and Euphrates,” said Radhi.

He said Iraq is also preparing for a tripartite meeting with Turkey and Syria to discuss “the issue of sharing damage in the water scarcity period, completing the discussion on the joint protocol between Iraq and Turkey, and establishing a research team in Iraq” to study the issue.

Two Iraqi civilians, Ahmed Shakir and Yousif Aamir, have been killed in a Turkish bombardment in Iraqi Kurdistan. After two days of bombing by Turkish military forces, the bodies of the two men from Mosul were found in the Batifa sub-district. #TwitterKurds #Turkey 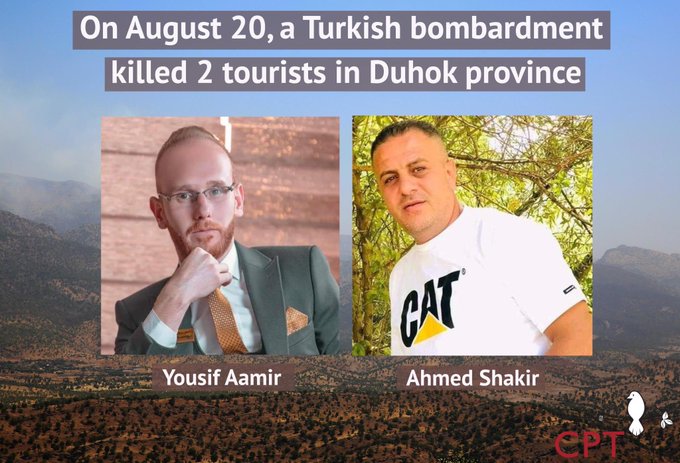 The crime 26-year-old Yousif Ammar and 40-year-old Ahmed Shukir carried out?  Yousif Musa (RUDAW) explains that "they visited the village of Bankie."

Well then, off with their heads, as the Queen of Hearts would say in ALICE IN WONDERLAND, right?

This is a genocide and it should have been stopped long ago.

Again, this is a genocide.

Last Tuesday, they bombed a clinic and killed civilians.  RUDAW informs that War criminal Recep Tayyip Erdogan, despot of Turkey, insisted yesterday that they did not bomb a clinic.  That's right and Erdogan's thugs didn't attack Americans on US soil either, right?  Oh, wrong.

Recep lies about attacking the clinic because that attack met the legal definition of a War Crime.  He knows that.  And he thinks if he rejects the term, cowed journalists won't use it and will continue to act as though it was an 'oopsie!' and not an actual War Crime that he can be -- and should be -- prosecuted for.