An attack on truth

We're the ones they hide the truth from.

Tuesday, June 25, 2019.  A day away from the first Democratic Party presidential debate, some candidates can speak of war but some can't or refuse to.

You got twenty four candidates.  I think every single one of them will tell you they have work to do. Including Joe Biden. And Joe has to defend his record. And you know, I helped lead the opposition to the war in Iraq, which in my view was the worst foreign policy blunder in the modern history of this country. Joe voted for that. I led the opposition against disastrous trade agreements which cost the workers of this country millions of good paying jobs. Joe voted for those. I voted against the deregulation of Wall Street, which in my view led to the great economic recession of 2008. Joe voted for them. So I mean we all have more work to be done. But I think that our message and my record of standing up for working families throughout my entire political life is one that will, in fact, resonate and carry me to victory.


Bernie was speaking on Sunday's FACE THE NATION (CBS) and speaking before former US House Rep Joe Sestak declared that he was running (which means 25 people are now seeking the Democratic Party's presidential nomination).

We'll note this section on Iran.


MARGARET BRENNAN: I want to ask you about Iran. Was President Trump's decision this week to call off that strike the right one?

SEN. SANDERS: See, it's like somebody setting a fire to a basket full of paper and then putting it out. He helped create the crisis and then he stopped the attacks. The idea that we're looking at the president of the United States who number one, thinks that a war., with Iran is something that might be good for this country.

SEN. SANDERS: Oh, just a limited strike- well, I'm sorry. I just didn't know that it's okay to simply attack another country with bombs just a limited strike- that's an act of warfare. So two points. That will set off a conflagration all over the Middle East. If you think the war is either- the war in Iraq, Margaret was a disaster I believe from the bottom of my heart that the war- a war with Iran would be even worse, more loss of life never ending war in that region, massive instability. We're talking about, we have been in Afghanistan now for eighteen years. This thing will never end. So I will do everything I can number one to stop a war with Iran. And number two here's an important point. Let's remember what we learned in civics when we were kids. It is the United States Congress, under our Constitution, that has warmaking authority not the president of the United States. If he attacks Iran in my view that would be unconstitutional.

MARGARET BRENNAN: So if you are commander-in-chief, you will ask Congress for permission--

MARGARET BRENNAN: --before you engage in any kind--

SEN. SANDERS: Look, there are some times emergency situations, okay? That I understand.

SEN. SANDERS: Yeah. If you're attacked immediately you have to respond. Nobody believes that we are in that type of emergency situation with Iran right now. So I'm going do everything we can to stop that. And what the function of a president should be is to say to Saudi Arabia which by the way is a horrific dictatorship a brutal dictatorship that kills dissidents, that treats women as third class citizens. I would try to say to Saudi Arabia you know, "we're not following your lead, you're gonna have to sit down with Iran. We will play a role. Work it out. The United States does not want to continue to lose men and women and trillions of dollars in never ending wars in the Middle East. Work it out."


Over the weekend, she sat down with MSNBC's Al Sharpton.


Tulsi discusses endless wars and Al Sharpton responds with?  Whether or not Donald Trump should be impeached.  This isn't an interview, its not a conversation, it's Al ticking off topics and apparently endless wars is not a topic that matters even to Al.  Would've thought that of all people on MSNBC, Al would have wanted to discuss endless wars at least enough to ask a follow up.

Former US House Rep Beto O'Rourke is talking about serious issues as he seeks the presidential nomination.

Beto O'Rourke‏Verified account @BetoORourke 13h13 hours ago
"Beto O'Rourke is out with a new plan today to help veterans. His four part plan would end the wars in Iraq and Afghanistan and reinvest that money into support programs and a state-of-the-art VA health care system. It would ensure veterans succeed when they come home."
/>
1:07
32.1K views
112 replies407 retweets1,660 likes

Garrett Haake: [. . .] [Y]ou jump right in with ending the forever wars.  Why is that the most important thing you can do to help veterans?

Beto O'Rourke: There are all these heroic young women and men from this country who are fighting wars.  We've been in Afghanistan for 18 years, in Iraq, for all intents and purposes, for the last 28 years.  No definition of victory, no strategy, no end in sight.  And yet they're willing to put their lives on the line for this country, willing to sacrifice their lives for America.  I want to make sure that not only are we there for them when they come back home -- sparing no expense to care for them, to treat their PTSD, to make sure that they're connected with purpose and function back in civilian life, I want to make sure we ask a question: Why are they going to war in the first place?  And if we cannot define victory, if we do not have a strategy, if our interests are not served by going to war, let's end those wars, bring those service members back home to their communities, to their families, and to their country.  That's perhaps the best thing we can do.  And that idea is inspired by veterans that I've listened to who want to make sure that going to war is the last absolute last resort for this country.

Garrett Haake:  What does a responsible end to the war in Afghanistan look like?  I feel like we've been talking about getting out of that country for ten years.  How do you do that in a way that you don't have ISIS or al Qaeda or somebody else right on our heels the minute we pull out?

Beto O'Rourke:  Ensuring that we've satisfied the reasons that we went to war the first place, holding those accountable that struck the United States, killed American citizens and ensuring that Afghanistan can never be used as a base to launch attacks on America again.  It's an incredibly important that we ensure that we've satisfied those two conditions and I believe that we have.  It's now time to work with our partners and other stakeholders in the region to bring every single one of those US service members back home to this country, to work diplomatically instead of militarily, to do our foreign policy aims in Central Asia and then to make sure that we work constructively with civil society, with the government in Kabal and other partners to ensure that other priorities -- a democratic form of government where the people of Afghanistan are represented, the full human rights of the people of that community -- including, importantly, women and girls -- is prioritized -- but doing so non-militarily, not at the price and consequence of US service members having to serve in that country.

Garrett Haake: Do you think four years into an O'Rourke administration there are still some Americans service members in Afghanistan?


,
Even before you get to Beto's discussion of a war tax, just the above, that's more than enough for a full debate.  There are two debates this week in Florida.  Will MSNBC, the network the least interested in the ongoing wars, bother to seriously address the ongoing wars in those debates?

A lot of candidates are getting a pass.  They want to be president of the United States but they have nothing to say about war -- despite the US being in several ongoing wars -- or else they offer weak statements that indicate just how little thought they've given to this topic.

Tulsi Gabbard, Bernie Sanders, Beto, Senator Kirsten Gillibrand, Marianne Williamson, Mike Gravel and Seth Moulton can discuss and debate this issue because they've made a point to address it seriously within their campaigns.

A lot of other people are just skating by.  And that's not really how someone should reach the presidency.

Lauren Marie Withrow‏ @laurenwithrow 22h22 hours ago
Lauren Marie Withrow Retweeted Beto O'Rourke
.@BetoORourke released this plan to for America’s veterans, to make them a priority in this country. As a Marine Corps veteran with PTSD almost a year out from a suicide attempt, having lost many veteran friends by their own hand, this plan is everything. @VeteransForBeto

Lauren Marie Withrow added,
Beto O'RourkeVerified account @BetoORourke
This country must be willing to pay any price and bear any burden to provide the full care, support, and resources to every single veteran who served every single one of us.…
Show this thread
25 replies188 retweets721 likes


Having served 6 years on the VA Committee w/my friend @BetoORourke I know he is committed to ensuring all veterans receive the care & support they need. I appreciate his comprehensive & thoughtful proposal to do right by those who have served our nation.
48 replies273 retweets881 likes

Beto for New Hampshire‏ @BetoForNH 18h18 hours ago
"As someone working on the front lines of the suicide & substance abuse epidemic in the veteran community, this proposal is right on target. Beto has clearly been listening to the veterans he has met." - Eric Golnick, US Navy veteran & CEO of @VFRHealthcare #nhpolitics #FITN
3 replies62 retweets202 likes

Beto O'Rourke Retweeted Beto O'Rourke
As we traveled to each of the 254 counties of Texas, I said we'd end the wars that we are in. Today's plan ensures that by ending them, we reinvest the resources saved in those who served as we bring service members back home to their communities.
Beto O'Rourke added, 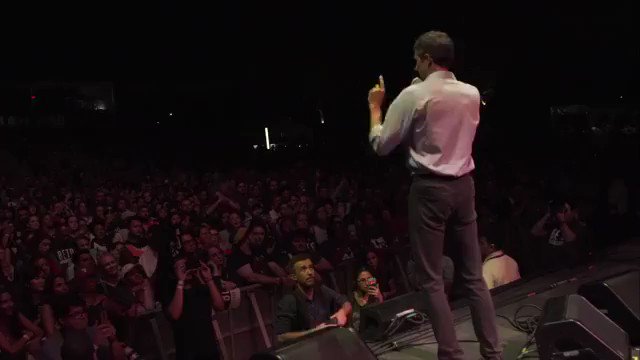 
Democratic presidential hopeful Beto O’Rourke — who heavily focused on veterans issues during his six years in the House of Representatives — released a proposal Monday morning that outlines how he would improve the lives of veterans if elected president.
The policy proposal includes many ideas that O’Rourke has long advocated, including ending the wars in Iraq and Afghanistan, dedicating more funding to the medical care of veterans and hiring more medical professionals, speeding up bureaucracy, providing more medical services for female veterans and expanding programs that help veterans as they transition out of the military.
This is one of numerous policy plans that Democratic candidates have released over the past few weeks ahead of their first debates, which are scheduled for Wednesday and Thursday in Miami.
O’Rourke became intimately aware of the challenges facing veterans when he ran for Congress in the El Paso area in 2012, personally knocking on more than 16,000 doors and hearing from veterans that they were waiting too long for medical care. The congressional district is home to Fort Bliss, a sprawling U.S. Army post that has expanded over the past decade, often at a quicker pace than services for veterans grew.