I know Judee Sill carried her own problems and probably she wasn't going to be that big even if David Geffen hadn't turned on her.  But she did make some amazing music -- including her self-titled debut.  "My Man On Love" is as strong as her better known "Jesus Was A Cross Maker" from the same album.

I like the  album Songs Of Rapture And Redemption: Rarities & Live.

If she had come along in the 90s, she probably could have been a huge star.

She could have been part of the Riot Grrl movement.  Bi-sexual wouldn't have been hidden.

The drugs though, probably, would have tanked her one way or the other regardless of when she emerged.

She had a complicated life with a lot of pain.  I'm not dissing her for doing drugs.  But I am noting that the roots of her addiction were deep and probably not going to be papered over.

If you've never heard of Judee, here's a song she wrote that's worth checking out, "The Kiss."

Tuesday, June 11, 2019.  Joe Biden slips in the polls (so, naturally, some pretend this means the end for . . . Bernie!), ISIS is on the rise in Iraq and Mahdi remains an ineffective prime minister.

In the United States, the race for the Democratic Party's presidential nomination continues.  Front runner Joe Biden has seen his lead slip.  The former vice president has 23 other candidates ready to seize the lead and among them?  Senator Elizabeth Warren.  Danielle Kurtzleben (NPR) reports:


In 2005, bankruptcy was on the rise and had been for years.
Lawmakers were pondering why, exactly, that was happening — and what, if anything, they should do about it — when two future presidential rivals squared off over a bankruptcy overhaul bill that would restrict who could write off their personal debts.
In one corner, Joe Biden — one of the staunchest Democratic advocates for the bill and a senator from Delaware, home to several large credit card companies. He was also the ranking member of the Judiciary Committee, which was debating the bill.
In the other corner, Elizabeth Warren, a Harvard Law professor who had fought against this type of bankruptcy overhaul for years, and who was on a panel convened for a hearing over the bill.
Their conversation started off with a testy (but weedy) exchange about bankruptcy courts. And it escalated from there, with plenty of interruptions and the occasional barb — Biden at one point cast Warren's arguments as "mildly demagogic." It ended with a tense dispute over what, exactly, the dispute ought to be.


WARREN: [Credit card companies] have squeezed enough out of these families in interest and fees and payments that never pay down principle.
BIDEN: Maybe should talk about usury rates. That maybe, that's what we should be talking about; not bankruptcy.
WARREN: Senator, I'll be the first. Invite me.
BIDEN: Now, I know you will, but let's call a spade a spade. Your problem with the credit-card companies is usury rates, from your position. It's not about the bankruptcy bill.
WARREN: But senator, if you're not going to fix that problem, you can't take away the last shred of protection for these families.
BIDEN: OK, I get it. [pause] You're very good, professor.


It was heated debate with a polite, even charming end — complete with laughter throughout the hearing room, but the stakes are higher now, with both Warren and Biden potentially poised to share a debate stage.

And while debate over a 14-year-old bankruptcy bill might otherwise be largely forgotten by now, the 2020 presidential election has made the disagreements between Biden and Warren relevant again — and shows how their exchange over that 2005 bill show up in their current presidential campaign strategies.


Joe is seen at his weakest since declaring himself to be a candidate.  Eric Bradner and Jeff Zeleny (CNN) report, "And a new Iowa Poll from CNN and the Des Moines Register showed he still tops the Democratic field, but with a smaller margin than in most national surveys. The poll also showed an enthusiasm gap for supporters of Biden and those of his top competitors."  Richard Cohen (WASHINGTON POST) believes Joe has a problem with sincerity:


One day last week, Joe Biden reaffirmed his support for the Hyde Amendment, which prohibits the federal funding of most abortions. A day later, the presidential candidate and former vice president reversed himself, giving as a reason the recent spate of draconian antiabortion laws enacted in several states. Surely, however, Biden was pushed by Democratic Party activists. At this rate, he’ll be a socialist by Labor Day.
Biden had been a longtime supporter of the Hyde Amendment, named for the late representative Henry J. Hyde, an Illinois Republican of delightful ideological inconsistency. (He favored gun control, for instance.) Biden had stuck with the amendment, first passed in 1976, even though much of the Democratic Party has become deeply opposed to it. He had to know, going into the campaign, that this sentiment had only hardened.


I am an ardent supporter of abortion rights and have long been opposed to the Hyde Amendment, but I am less than thrilled at Biden’s sudden conversion. It reeks of insincerity and of a decision made simply for political reasons. He was under intense pressure from the party’s liberal wing, particularly the suddenly accelerating Sen. Elizabeth Warren (D-Mass.), whose authenticity is not in doubt.

As Joe fades somewhat, corporate media works overtime to paint this as the end of Senator Bernie Sanders' campaign.  BLOOMBERG is probably the worst offender.  Strange that being in a strong second place means, to BLOOMBERG, that Bernie's nearing the end.  Of course, these same presstitutes were denying Bernie the lead when he was the candidate leading in the polls.  Bernie's support being less currently?  In 2016, there were only three real candidates in the Democratic Party's primaries.  Right now, there are 24.  That's lowered everyone's popularity.

"I don’t want to comment on what Joe Biden should or shouldn’t do," Gabbard, a major in the Army National Guard, told the Washington Examiner in New York City on Saturday. "What I’m focused on is the message that I hope you heard loud and clear here today, which is about changing our foreign policy so that we are able to address our domestic policy, ending these wasteful regime change wars, this new Cold War nuclear arms race, and taking the trillions of dollars that we would spend on these wars and weapons and actually using that to serve the very real and urgent needs of people, things like healthcare, education, infrastructure, protecting our environment, and so much more."

Improving electricity supply will be key to the legitimacy of Iraq's new government and to avoiding protests similar to those which roiled the country last summer. But the prospects do not look good.
Iraq's prime minister Adel Abdul-Mahdi — touted as a harbinger of reform — remains weak (a hostage of inter-Shia political competition); public services in oil-rich Basra remain sub-par and current momentum for a referendum on creating a new federal region is gaining pace. And, despite Iraq's parliament passing a record budget this year, funds allocated for investment remain low — a reflection of the drag created by the country's public wage bill.
The summer 2018 protests had several underlying causes: frustration with Iraq's post-2003 political system (as manifest in low voter turnout in the elections); unemployment, water shortages, and most importantly, power shortages. Across 2018 as a whole, power generation met barely half of potential grid demand.

Adel Abdul-Mahdi remains weak, yes.  And though some rush to blame it on other Shi'ites competing with him that's not reality.  He wanted to be prime minister.  He wanted it for over a decade.  He repeatedly made the case for himself to the US government and had long been the CIA's choice.  But when the day finally arrived and he became prime minister, he wasn't up to the job.

The law was written the way it was because forming the Cabinet is your test, forming the Cabinet shows whether or not you have the leadership needed for a prime minister.  Mahdi doesn't have it.  And that was clear last October when he was unable to form a Cabinet.


Holly McKay (FOX NEWS) reports ISIS is on the rise yet again in Iraq:


Between May 5 and June 3, the U.S-led Combined Joint Taskforce’s Operation Inherent Resolve – the name given to the mission to defeat ISIS – conducted 11 strikes consisting of 34 engagements against ISIS targets in Iraq. More than 20 caves, two vehicles and a one-bedroom infrastructure were decimated. At least three ISIS terrorists were killed in tunnels 40 miles west of Ramadi, Iraqi defense officials reported.
And across the war-ravaged nation, the ISIS bloodletting goes on.
The Iraqi Civil Defense Directorate affirmed last week that more than 6,100 acres of agricultural crops were incinerated in less than two weeks in 136 separate incidents, with the at-risk area spanning almost 120,000 acres of Iraqi land. ISIS has claimed responsibility for numerous blazes in recent weeks, justifying their targeting of wheat crops as retaliation against those refusing to pay them taxes.

US Senator Tammy Duckworth wrote a ridiculous column -- mainly wrote it about herself -- she is her favorite topic -- last month where she insisted US troops must remain in Iraq.

She should have had that screamed at her.

US troops have to remain in Iraq . . . because of ISIS?

The last time this happened, what happened in Iraq?

Nouri al-Maliki was the prime minister.  And ISIS seized Mosul and other areas.  So US troops have to remain on the ground in Iraq but there are no requirements for the Iraqi government?  In 2007, the Democrats demanded benchmarks for progress and success.  By 2008, the benchmarks were largely forgotten (US House Rep Lloyd Doggett was the last member of Congress to speak of them in a hearing).  Those benchmarks were never met.

Along comes Tammy Duckworth, swinging her dick and insisting that US troops stay forever in Iraq, no conditions, no need for progress.


(WHO) confirms that the health situation in Iraq faces great challenges, including: lack of funding, the decline of the immunization file, the cessation of health sector projects, and the fact that (50%) of important drugs are not available in hospitals and health centers. 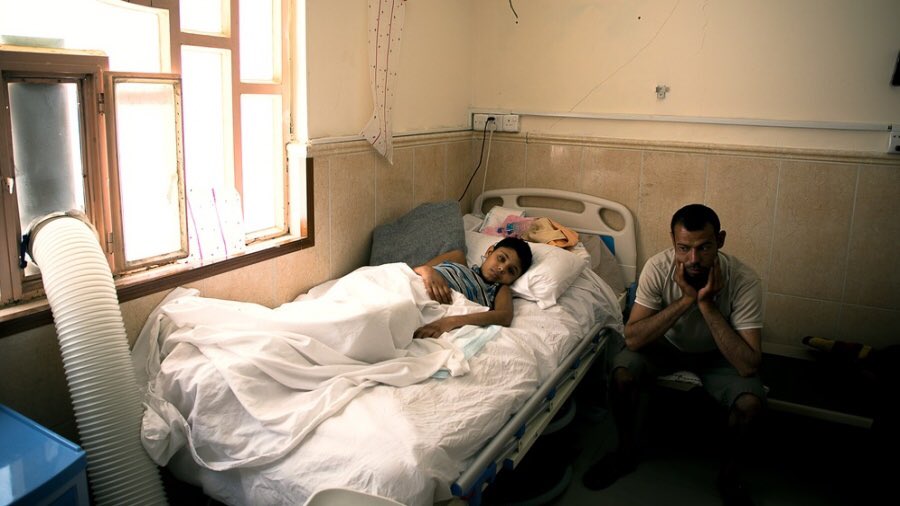 The Iraqi government is corrupt and does not take care of its citizens but that's okay with Tammy, just keep US troops on the ground for no real reason.

Army veteran to become first living recipient of Medal of Honor for war in Iraq.

The Army veteran is credited with saving his entire squad after being pinned down by enemy fire in the western Iraqi city of Fallujah.
2 replies45 retweets161 likes

On June 25, President Trump will award the Medal of Honor to then-Staff Sergeant David G. Bellavia for his lifesaving acts of valor while serving as a squad leader in support of Operation Phantom Fury in Fallujah, Iraq.
43 replies187 retweets771 likes