Here's Isaiah's THE WORLD TODAY JUST NUTS "The Sit Down" from Sunday. 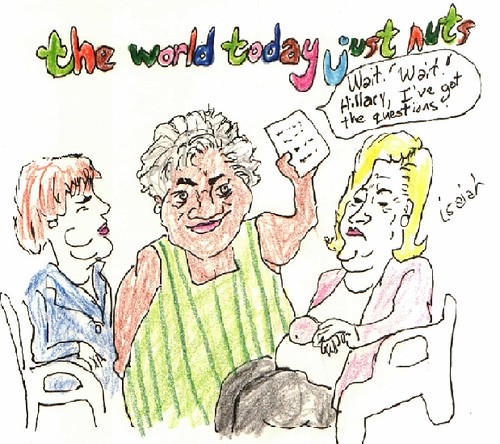 A Maryland judge ordered the state bar to open an investigation Monday into the three lawyers who helped former Secretary of State Hillary Clinton delete her private emails.
Anne Arundel County Circuit Court Judge Paul F. Harris Jr. said the complaints lodged against David E. Kendall, Cheryl Mills and Heather Samuelson were egregious and the state bar couldn’t dismiss them as frivolous.
“There are allegations of destroying evidence,” Judge Harris said at a hearing Monday morning.
He said the state’s rules require the bar to conduct investigations no matter who raises the complaint and can’t brush aside accusations.


They could lose their license.

And if they did, I wouldn't lose any sleep.

That tragedy was used to sell war.

And war continues to this day.


The New York Times and other Western media have learned few lessons from the Iraq War, including how the combination of a demonized foreign leader and well-funded “activists” committed to flooding the process with fake data can lead to dangerously false conclusions that perpetuate war.

What we have seen in Syria over the past six years parallels what occurred in Iraq in the run-up to the U.S.-led invasion in 2002-03. In both cases, there was evidence that the “system” was being gamed – by the Iraqi National Congress (INC) in pushing for the Iraq War and by pro-rebel “activists” promoting “regime change” in Syria – but those warnings were ignored. Instead, the flood of propagandistic claims overwhelmed what little skepticism there was in the West.

Regarding Iraq, the INC generated a surge of “defectors” who claimed to know where Saddam Hussein was concealing his WMD stockpiles and where his nuclear program was hidden. In Syria, we have seen something similar with dubious claims about chemical weapons attacks.

The Iraqi “defectors,” of course, were lying, and a little-noticed congressional study revealed that the CIA had correctly debunked some of the fakers but – because of the pro-invasion political pressure from George W. Bush’s White House and the U.S. mainstream media’s contempt for Saddam Hussein – other bogus claims were accepted as true. The result was catastrophic.

Last night, we noted talking point zombie Oliver Willis who wanted you to never forget, on 9/11 that Bully Boy Bush was responsible for the Iraq War.

"There is no doubt that President Bush failed us in the run-up to war. But the American people weren't just failed by the President -- they were failed by the Congress."  Those aren't my words -- I don't use the p-word for Bully Boy Bush -- they're Barack's.  Oops, Oliver, you stupid idiot, Barack slaps you upside your ugly face.

We'll get to Barack.


But as we noted last night:


It's cute the way Oliver gives a pass to everyone but Bully Boy Bush.

It's also cute the way all the Senate members who made it onto the Democratic national ticket from 2000 to 2016 voted for the Iraq War.

John Kerry headed the ticket in 2004 and John Edwards was his running mate.

In 2016, the ticket was headed by Hillary Clinton.

Grasp that not once in the last 16 years, has a member of the House or Senate who voted against the Iraq War been on the Democratic presidential ticket.

Never forget that the ones who voted for the Iraq War were rewarded by Democrats and Republicans while the ones who opposed the Iraq War got no applause from their political parties -- at least none that translated as: "You are qualified to lead the nation."


Supposedly, this 2002 vote was important.  In 2007, then candidate Barack Obama insisted:


You know, it was five years ago yesterday that the United States Senate voted to give President Bush the authority to wage war in Iraq. At the time, I was a candidate for the U.S. Senate and I spoke out strongly in opposition to going to war. Nearly all of my opponents for the Democratic nomination for President made a different choice, and voted to authorize the war.
Now, some have asked me, "Why are you always reminding us that you opposed the war? Isn't that yesterday's news? Is that experience really relevant?"
And what I always say is this -- this isn't just about the past, it's about the future. I don't talk about my opposition to the war to say "I told you so." I wish the war had gone differently. But the reason I talk about it is because I truly believe that the judgment, and the conviction, and the accountability that each of us showed on the most important foreign policy decision of our lives is the best indicator you have of how each of us will make those decisions going forward.
How we made that decision, and how we talk about it, is critical to understanding what we would do as President. Will we carefully evaluate the evidence and the consequences of action, or will we skip over the intelligence and scare people with the consequences of inaction? Will we make these decisions based on polls, or based on our principles? Will we have the courage to make the tough choice, or will we just choose the course that makes us look tough?
These decisions aren't just Washington parlor games about who's up and who's down. These are life and death decisions. They impact your safety and security. Above all, they impact the soldier from Iowa, or the airman from Illinois, and every single one of our brave young men and women who are in harm's way, and all of their families and friends back home.
Now, it's easy to oppose a war after it has gone wrong. It's easy to say -- years later -- that the war shouldn't have happened, given what we know now about how badly it has turned out. But every single one of us running for President only had one chance to make a judgment about whether or not to go to war.
As I travel around the country, so many Americans ask me: how did we go so wrong in Iraq? And they're not just asking because they want to understand the past -- they're asking because they don't want their leaders to make the same mistakes again in the future. They don't want leaders who will bog us down in unnecessary wars; they don't want leaders who allow America to lose its standing; and they don't want leaders who tell the American people anything less than the full truth about where they stand and what they'll do.
That is a big part of what this campaign is about. Because we need to learn the painful lessons of the Iraq War if we're going to secure this country and renew America's leadership.
[. . .]
There is no doubt that President Bush failed us in the run-up to war. But the American people weren't just failed by the President -- they were failed by the Congress. Too many members of Congress failed to ask hard questions. Too many members of Congress, including some of my opponents in this race, failed to read the National Intelligence Estimate for themselves -- an intelligence report that was so unconvincing, and so filled with qualifications, that the chairman of the Senate Intelligence Committee decided to vote against the war when he read it for himself. Too many Democrats fell in line with George Bush, and voted to give him the open-ended authority to wage war that he uses to this day. So let's be clear: without that vote, there would be no war.
Senator Edwards voted for the war in 2002. He has renounced that vote, instead of pretending that it was a vote for anything but war. But Senator Clinton makes a different argument. She says that she wasn't really voting for war back in 2002, she was voting for more inspections, or she was voting for more diplomacy. But all of us know what was being debated in the Congress in the fall of 2002. We didn't need to authorize a war in order to have United Nations weapons inspections. No one thought Congress was debating whether or not to conduct diplomacy. The headlines on October 12, 2002 did not read: "Congress authorizes diplomacy with Iraq" -- the headlines on October 12, 2002 read "Congress backs war."
In the course of this campaign, we haven't just seen different candidates talk about their vote in different ways -- we've seen how different candidates have drawn different lessons from their experience of the Iraq War.

What lesson did she draw from her 'mistake'?

It's hard to tell because she refuses to be consistent in her answer.


As Scott Beauchamp noted at THE ATLANTIC last September:


Taking Clinton at her word that she really did believe, despite evidence to the contrary, that Saddam was still harboring WMDs in 2002, it became evident pretty soon after the invasion that there was no smoking gun. So why didn’t she apologize in 2004? In 2006? How about when she ran for president in 2008? Why wait 12 years to offer an apology based on facts that hadn’t changed over the previous decade? In fact, the only major shifts between Clinton’s vote and her newfound contrition were the failure of America’s nation-building project in Iraq and the overwhelming sway of public opinion against the war. It’s a set of circumstances that leave only a few disheartening interpretations of Clinton’s behavior. In one, she shifted her own rhetoric out of expediency. In another, she agreed with the basic tenets of Bush’s nation-building program, but believed he botched the follow-through. But she doesn’t refer to either in her vague expression of regret in Hard Choices.
Like many of the issues of the Iraq War itself, what Clinton might have specifically gotten wrong hangs in the air, unexamined and unexplored. Her mea culpas never address her failures on a granular level. Her apologies never hint at a transformative lesson that fundamentally altered her ideas of organized state violence.

How did Donald Trump end up in the White House?

That was in part due to Hillary and the Democratic Party honchos who rigged the primaries for her and fed her debate questions.  Still, she barely squeaked across the line.

The thought that 8 years later, she'd be a better candidate than in 2008?

The thought that the sitting president's words about her from 8 years ago would be forgotten?

That was a delusion.

Barack wasn't Saint Barack -- though the cult tried to make him that way.

In what we quoted above?

He's not even correct.

But that sailed over everyone's head.

And the key here isn't truth or lie in what he said.

The key is how it was received.

That so many agreed.

That so many rushed to agree.

That's what should have been treated as a warning sign in 2016.

The Clintons were called racists.

Because fact isn't the issue.

The issue is perception.

And the perception of Hillary was racist.

It was actually worse than that.

When she spoke of long primaries and cited 1968, what happened?

She was accused of calling for someone to assassinate Barack.

Not by Republicans, she was called that by supporters of Barack.

And this wasn't a whisper.

Keith Olbermann was only one of the many screeching voices on TV at that time insisting she was calling for Barack to be assassinated.

That wasn't decades ago.

Her four years as Secretary of State weren't all that and certainly weren't enough to wash away the 2008 campaign.

Barack touched into the raw nerve with regard to Hillary.

And he could (halfway) try to smooth things over in 2016 (he didn't, read the book Hillary had ghostwritten) but it didn't matter.  It was not going to be forgotten.

It was too soon.

And she was the wrong candidate. 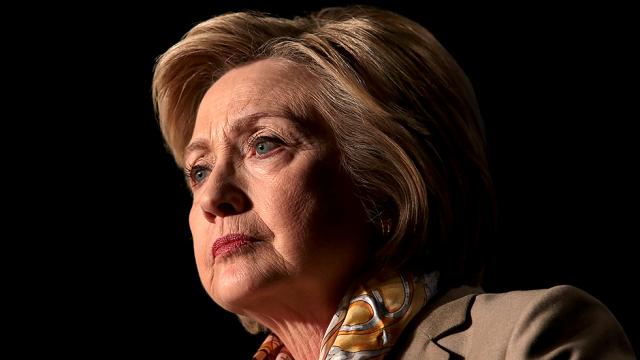 The HillVerified account @thehill
JUST IN: Clinton: "I am done with being a candidate" hill.cm/6ultAOY
178 replies752 retweets2,046 likes

And let's hope that in 2020, the Democratic presidential ticket will not include one person who voted for the Iraq War.