Disagreeing on a point

So he Tweeted this today:

James Woods‏Verified account @RealJamesWoods  3h3 hours ago
This man was a real leader of the #KuKluxKlan. He was Hillary Clinton's mentor. His name is Robert Byrd. #Byrd 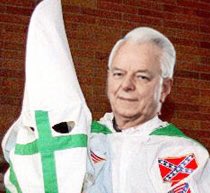 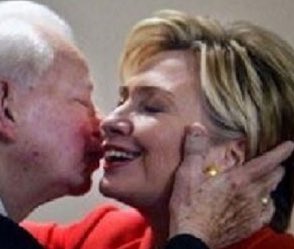 Yes, he was KKK -- and he left them.  I believe he publicly rejected them.  If James disagrees, that's fine.

How was he her mentor?

She got into the Senate in January 2001.

Robert Byrd did not do that.

If he was her mentor, how much of a mentor was he?

For me, looking back today, he's just one more person she sucked up to and used.  But he wasn't a mentor, he didn't teach her anything and she certainly didn't follow his lead.

The Iraqi Prime Minister’s office on Thursday admitted a faction of the security forces committed “abuses” against civilians during the battle to defeat the Islamic State (IS) in Mosul.
Prime Minister Haider al-Abadi’s office said they began an investigation into the matter in May after a report by German news magazine Der Spiegel included images of torture by Iraqi forces.


The report for DER SPIEGEL was done by Ali Arkady and if you're wondering why he isn't a household name in the west, you're really naive.

THE NEW YORK TIMES can't applaud him because that would be indicting themselves.

Rukmini Callimachi is their 'star' reporter -- a self-promoter with zero modesty who is prone to I-I-I-I-I-I statements.  As we noted several times in February, Rukmini had crossed a line.  She was identify with the Iraqi troops she was embedded with.  She was also insisting that there was no abuse.

But War Crimes were being carried out.

Rukmini is only the most prominent -- because she made herself that way -- of the misreporters.

Applauding Ali means admitting how much money was wasted by various outlets.

And, let's face it, the rule of modern 'journalism' remains: Rather than rock the boat, let's all be wrong together.

So they all ignored what was happening -- all but Ali.

Faced with mounting evidence of war crimes committed by Iraqi troops in the course of the Mosul invasion, as well as against “suspects” after victory was declared, Iraqi Prime Minister Hayder Abadi today admitted that there were “abuses” committed by security forces in the city.


And, to be clear, all Hayder is admitting to is what DER SPIEGEL has already documented with photographic evidence.


AP explains regarding spokesperson Saad al-Hadith, "Al-Hadithi was referring to allegations reported by an Iraqi photographer for Germany's Der Spiegel magazine in May. The report alleged Iraq's Emergency Response Division -- an elite force linked to the Interior Ministry -- tortured and killed civilians in and around Mosul."


That was not the end of the abuse.

International observers have discovered an execution site in west Mosul, Human Rights Watch said today. That report, combined with new statements about executions in and around Mosul’s Old City and persistent documentation about Iraqi forces extrajudicially killing men fleeing Mosul in the final phase of the battle against the Islamic State (also known as ISIS), are an urgent call to action by the Iraqi government.
Despite repeated promises to investigate wrongdoing by security forces, Prime Minister Haider al-Abadi has yet to demonstrate that Iraqi authorities have held a single soldier accountable for murdering, torturing, and abusing Iraqis in this conflict.
“As Prime Minister Abadi enjoys victory in Mosul, he is ignoring the flood of evidence of his soldiers committing vicious war crimes in the very city he’s promised to liberate,” said Sarah Leah Whitson, Middle East director at Human Rights Watch. “Abadi’s victory will collapse unless he takes concrete steps to end the grotesque abuses by his own security forces.”
International observers, whose evidence has proven reliable in the past, told Human Rights Watch that on July 17, 2017, at about 3:30 p.m., a shopkeeper in a neighborhood directly west of the Old City that was retaken in April from ISIS took them into an empty building and showed them a row of 17 male corpses, barefoot but in civilian dress, surrounded by pools of blood. They said many appeared to have been blindfolded and with their hands tied behind their back.
They said the shopkeeper told them that he had seen the Iraqi Security Forces’ 16th Division, identifiable by their badges and vehicles, in the neighborhood four nights earlier, and that night had heard multiple gunshots coming from the area of the empty building. The next morning, when armed forces had left the area, he told them, he went into the building and saw the bodies lying in positions that suggested they were shot there and had not been moved. He said he did not recognize any of those killed.
The international observers also saw soldiers from the elite Counter Terrorism Service (CTS) in the area. They contacted Human Rights Watch by phone from the site and later shared five photos they took of the bodies.
On July 17, another international observer told Human Rights Watch they spoke to a senior government official in Mosul who told them he was comfortable with the execution of suspected ISIS-affiliates “as long as there was no torture.” The observer said a commander showed their group a video taken a few days earlier of a group of CTS soldiers holding two detainees in the Old City. They said the commander told them that the forces had executed the men right after the video was taken.
Salah al-Imara, an Iraqi citizen who regularly publishes information regarding security and military activities in and around Mosul, published four videos allegedly filmed in west Mosul on Facebook on July 11 and 12. One video, posted on July 11, appears to show Iraqi soldiers beating a detainee, then throwing him off a cliff and shooting at him and at the body of another man already lying at the bottom of the cliff. Human Rights Watch had verified the location of the first video based on satellite imagery. Other videos showed Iraqi soldiers kicking and beating a bleeding man, federal police forces beating at least three men, and Iraqi soldiers kicking a man on the ground in their custody.
A third international observer told Human Rights Watch on July 18 that they witnessed CTS soldiers bring an ISIS suspect to their base in a neighborhood southwest of the Old City on July 11. The observer did not see what happened to the suspect next, but said that a soldier later showed them a video of himself and a group of other soldiers brutally beating the man, and a second video of the man dead, with a bullet to his head.

“Some Iraqi soldiers seem to have so little fear that they will face any consequence for murdering and torturing suspects in Mosul that they are freely sharing evidence of what look like very cruel exploits in videos and photographs,” Whitson said. “Excusing such celebratory revenge killings will haunt Iraq for generations to come.”

Let's again emphasize one paragraph from above:


Despite repeated promises to investigate wrongdoing by security forces, Prime Minister Haider al-Abadi has yet to demonstrate that Iraqi authorities have held a single soldier accountable for murdering, torturing, and abusing Iraqis in this conflict.


RUDAW noted at the end of July:


Because of alleged killings committed by the 16th division of the Iraqi army in Mosul, the United States should stop assisting Baghdad militarily, argues a human rights monitor.

“The US government should make sure it is no longer providing assistance to the Iraqi unit responsible for this spate of executions but also suspend any plans for future assistance until these atrocities have been properly investigated,” said Sarah Leah Whitson, Middle East director at Human Rights Watch (HRW).

The group released a report on Thursday claiming two international observers witnessed “the summary killings of four people by the Iraqi army’s 16th Division in mid-July 2017.”

Despite this, Nancy A. Youssef and Mike Giglio (BUZZFEED) reported in July:

In the two weeks since Iraqi forces declared victory over ISIS in Mosul, local and international media have told a grim counterstory to the scenes of celebration — a rash of extrajudicial killings of suspected ISIS members at the hands of Iraqi security forces.
The killings are no secret. Videos of Iraqi soldiers executing ISIS suspects have been posted to social media. Human Rights Watch and other watchdogs have issued reports. Iraqi military officers have openly discussed their participation in torture and revenge killings with reporters.

The Iraq War continues and does so with less and less public transparency.

And the bombs continue to fall from US warplanes -- DoD noted yesterday:

South Central Michigan Greens to Discuss Activities 3-5pm Saturday, August 26 at Jackson Coffee Company
===================================================
The South Central Michigan Greens local will discuss recent and upcoming activities in the three-county area at the group's next monthly meeting 3-5pm on Saturday, August 26 at the downtown Jackson Coffee Company (201 South Mechanic Street). Local co-founder Monika Schwab of Jackson will report on the March for the Great Lakes at Calder Plaza in Grand Rapids on August 16. The goal of the march is to promote the closing of Enbridge's aging and controversial Line 5 pipeline through the Straits of Mackinac. And John Anthony La Pietra of Marshall, last year's Green nominee for 63rd District State House, will invite the public and his fellow Greens to a "Make the Connection" Labor Day weekend History Walk. The walk will start at 11am on Saturday, September 2 across East Michigan Avenue from Marshall's VFW Hall, linking two labor landmarks in Marshall -- both related to the founding of a railroad engineers' union in 1863. Also on the agenda is discussion of how, when, and where to canvass to find supporters of Green values in the three-county area. The South Central Michigan Greens local was formed earlier this year to bring together Green Party members and supporters in Calhoun, Hillsdale, and Jackson Counties.

For more details and news about the local -- including a description of the "Make the Connection" event and a link to a map of the route -- please visit the local's Facebook page: https://www.facebook.com/SCMiGreens/
# # # The Four Pillars of GPMI: Grassroots Democracy Social Justice Ecological Wisdom Non-Violence For our Ten Key Values, add: Community-Based Economics Decentralization Feminism Future Focus/Sustainability Personal and Global Responsibility Respect for Diversity

Mikey Likes It!
MARVEL'S THE DEFENDERS
40 minutes ago