Michael TraceyVerified account‏@mtracey
Corn tweeted this nonsense **well after** the true nature of the Treasury action was reported. Due diligence = completely out the window 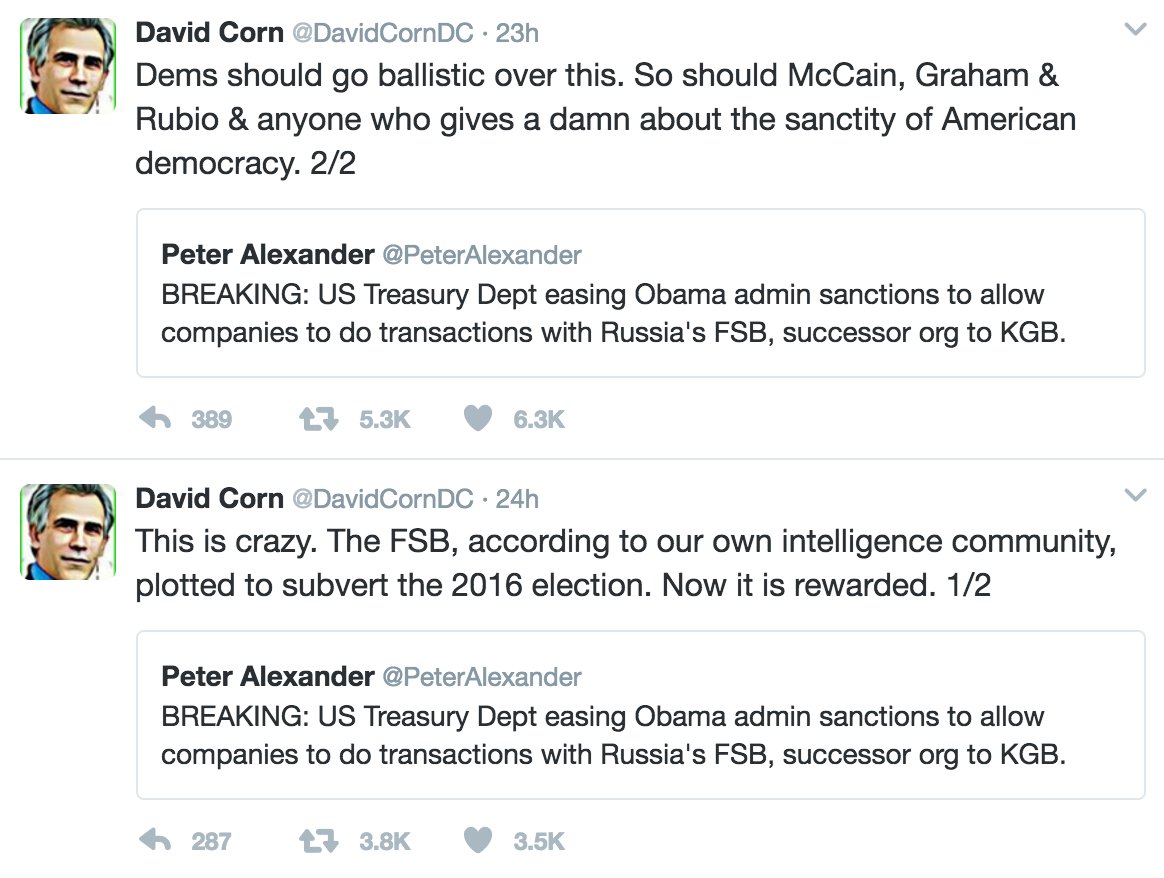 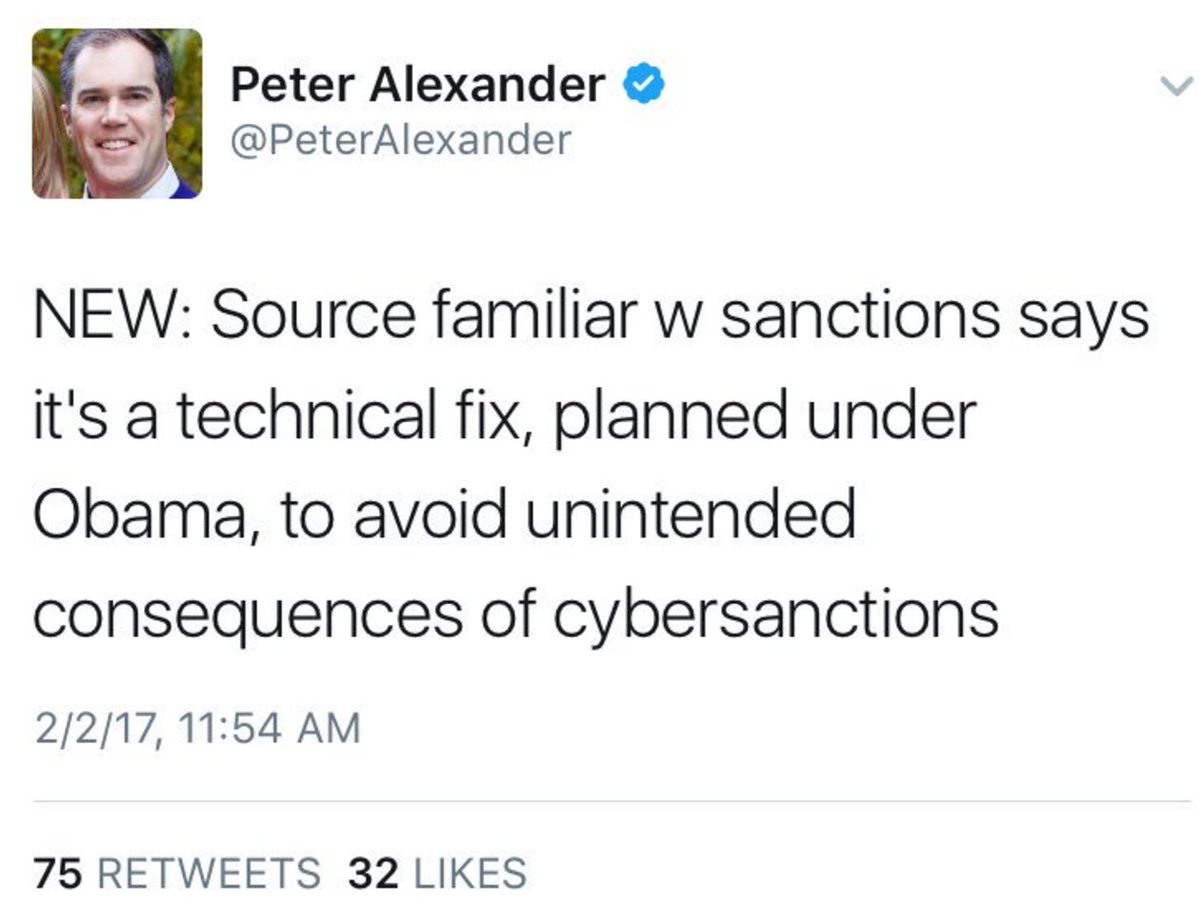 
He is such a e did that with Hillary too back in 2008 which a lot of people forget.

His money/ego was on Barack then.

Refused to correct his lies.

Mother Jones finally made him correct the pardon lie but all he did was bring up Marc Rich to act like that justified his lies.

He can't help but lie, apparently.

And he lies based on whomever last fed him as he sat in his cage.

Friday, February 3, 2017.  Chaos and violence continue, it all continues. Day after day.

“We thought we were partners with our American friends, and now we realize that we’re just considered terrorists."
27 replies761 retweets608 likes

They're not considered to be terrorists.

But they should be.

The Iraqi forces followed orders from Nouri al-Maliki on the day after the US military did their drawdown.  What were those orders?

They followed orders in the dawn raid on a Sunni member of Parliament's home that left his brother dead.

These are the reasons that the US government -- among the reasons -- is in violation of the law -- domestic and international -- for supplying Iraq with weapons and money.

That's before we get to the fact that current Prime Minister Hayder al-Abadi brought the Shi'ite militias into the Iraqi forces despite their past history of abuse and the current history as well.

What does the general think is happening to Sunni boys and young men fleeing Mosul?

They're being rounded up by the militias.

That means torture or death.

I don't think US President Donald Trump's  90 day moratorium on accepting some Iraqis equals what's being done to the Sunnis right now in Iraq in a supposed 'liberation' effort.

The Trump administration amended its visa ban to allow emigration by the families of Iraqi interpreters nyti.ms/2kYWskJ
38 replies172 retweets239 likes

And by the way, we noted former primer minister (and forever thug) Nouri al-Maliki and current prime minister Hayder al-Abadi because they ran and run the country.

In a poor attempt at humor, Donald Fagin posts, at THE HUFFINGTON POST, a fictional commentary that mistakes the ceremonial post of president of Iraq with that of president of the United States.  I guess beating your wife doesn't allow you much time for an education or a fact check.


Domestic abuse is homegrown terrorism and should be treated as such.

Sadly, more and more THE HUFFINGTON POST sees itself as community service for various offenders.

To say it's worse to revoke a visa than bomb Muslims is ridiculous. They hate Trump that's why
12 replies125 retweets219 likes

Unbelievable how far Obama's cheerleaders will go to defend his every action. Get over it, hypocrites. Your man is a war criminal.
26 replies211 retweets530 likes

It's a pity that Obama's "regime change" wars did not move liberals to protest the same way Trump's refugee ban did.
27 replies284 retweets361 likes


Back in August of 2014, the US government began bombing Iraq daily.


Strikes in Iraq
Bomber, fighter and remotely piloted aircraft and rocket artillery conducted five strikes in 19 engagements in Iraq, coordinated with and in support of Iraq’s government:

-- Near Kisik, a strike engaged an ISIL staging area.

On these daily bombings, REUTERS reports, "Eleven civilians were killed in four separate air strikes by the U.S.-led coalition fighting Islamic State in Iraq and Syria between Oct. 25 and Dec. 9, the U.S. military said on Thursday."


In Basra today, ALSUMARIA reports, hundreds of Iraqis turned out to protest in the dispute over a waterway between Iraq and neighboring Kuwait.

Such disputes are not umcommon for neighboring countries.

Iran is rapidly taking over more and more of Iraq even after the U.S. has squandered three trillion dollars there. Obvious long ago!
16,842 replies19,928 retweets84,467 likes

Hayder al-Abadi has responded that Iran is not in control of Iraq.

Others would beg to differ, many would differ over what control means.

Certainly, Iran has seized land from the border it shares with Iraq.  That has caused tensions in Iraq.

Patrick Cockburn of THE INDEPENDENT has long insisted that Iran chose the 2010 prime minister of Iraq (no, it was the US government and the Iranian government together).

THE NEW YORK TIMES has reported on increased control of Iraq by Iran for over ten years now in one one report after another.

For over ten years now, the US government has decried Iran's influence in Iraq.

(And we've noted that as a bordering neighbor, of course Iran will have some impact in Iraq.)

In the last year, Nouri al-Maliki has made repeated visits to Iran in what Iraqi political observers see as his attempt to be renamed prime minister.

Former Iraqi president Jalal Talabani was kept in office for a year after the stroke, despite being unable to walk or speak, due to his wife Hero's efforts with the government of Iran.


And Abdulrahman al-Rashed (AL-ARABYIA) argues in a new column:


The new US President Donald Trump criticized his predecessor Barack Obama several times. He said that Obama has left Iraq an easy target for the Iranians, squandering $3 trillion efforts deployed by the US to build an allied Iraq.

The Iranian authorities sent Trump indirect threatening messages instead of reassuring ones. They ordered one of their many militias in Iraq, al-Nujaba movement, to fire missiles in order to show its strength. Al-Nujaba is one of the militias that can target neighboring countries and is similar to the Yemeni Houthis that are also used by Iran to bomb Saudi Arabia with missiles financed by them.
Iran’s threat in Iraq is not just for the neighboring Gulf countries but rather a threat against Iraqis first and then against the surrounding countries.


Iran’s main objective is to seize Iraq, which is the second-richest country in the region, to finance its economic and military needs. During the past six years, Iran has converted Iraq into an Iranian military base, from which it wages its wars in Syria, and threatens Kuwait, Saudi Arabia and Jordan.
The leadership of the Iranian Revolutionary Guards brags about not costing the Iranian treasury any money on foreign military activities in Syria and Iraq, because it depends on the Iraqi treasury that has become its financial portfolio and under the control of pro-Iranian groups after marginalizing the authorities of current Iraqi Prime Minister Haider al-Abadi.

Meanwhile, ALSUMARIA reports roads to Baghdad's Tahrir Square were cut off in an attempt to halt today's protest
The following community sites updated: