I'm an African-American lesbian and I am a Hillary critic


Sarah Jones (The New Republic) has a really important article.  Here's a taste:

Sexism is everywhere, even in the left. But men are not immediately guilty of sexism for criticizing a female candidate’s economic and foreign policies. And it is particularly disingenuous for Badham to attribute those concerns to a “testosterone left” when women have criticized Clinton since she announced her candidacy. Many are women of color. They’ve written articles. Books, even!
But Badham isn’t the only writer to minimize or even ignore left-wing female Clinton critics. Behold Salon’s Amanda Marcotte:

It is self-evidently anti-feminist to pretend that Clinton criticism is only produced by a “testosterone left” or victims of internalized misogyny. No one’s liberated by portraying left-wing women as oppressed automatons incapable of independently formulating political thought.
Feminist writers who promote this rhetoric also leave themselves little space to pressure their candidate if she takes office. And they’ll need to, as Kathleen Geier previously wrote for The New Republic: Clinton’s political record contains several entries that should concern any feminist. And testosterone has nothing to do with it.

And look, it's 'feminist' Amanda again.

She's not a feminist.

And African-American women are especially sick of her because we don't need another White women trying to speak for us or insulting us due to their own stupidity.

And for the record, Amanda Mac and Cheese White girl, I'm an African-American lesbian and I am a Hillary critic.

Why don't you put that in your Malibu Barbie Beach House and smoke it.

Thursday, November 3, 2016.  Chaos and violence continue, Mosul isn't liberated and bad things are happening there (don't tell THE INDEPENDENT), a mole at the Justice Dept was tipping off Hillary Clinton's campaign regarding the criminal investigation into her actions, and much more.

As the US presidential election nears, new revelations about War Hawk Hillary Clinton emerge.  As THE YOUNG TURKS reported yesterday afternoon the Democratic presidential nominee was being tipped off about an ongoing FBI investigation into her actions by a Justice Dept mole.


Peter Kadzik is the mole in the Justice Dept.

He is an Assistant Attorney General with the Justice Dept -- among his roles? Providing Congress with updates on the probe into Hillary Clinton.

Among his new roles: Finding a job and facing charges.

That's what needs to happen.

You cannot have trust in the government and have someone at the Justice Dept tipping off subjects of investigations.

Doesn't matter the subject is guilty or innocent -- nor is that something the FBI determines.

You cannot have anyone tipping people off.

Peter Kadzik was supposed to be working for the American people but instead found a 'higher calling' in serving Hillary Clinton.

This is not an issue that has much leeway.

Unless US President Barack Obama is attempting to provide Congress with reasons to launch probes and, in fact, explore his entire two year term.

That's what his failure to fire Kadzik means.

It means that there is no accountability and that Kadzik's corruption is relatively minor when compared to what else is going on so Congressional probes are needed.

Kadzik needs to be fired and stripped of any security clearances.

ZERO HEDGE has coverage of the scandal here.

Another issue that is immediately raised?

The federal government needs to ensure that employees are not using private e-mails to conceal things from the public.

Asked Wednesday about the relationship between Podesta and Kadzik, Clinton campaign spokeswoman Jennifer Palmieri characterized the communication as "stolen emails that haven't been authenticated."

Voters deserve to get full and complete facts.

The Clinton campaign must answer on the Kadzik issue. 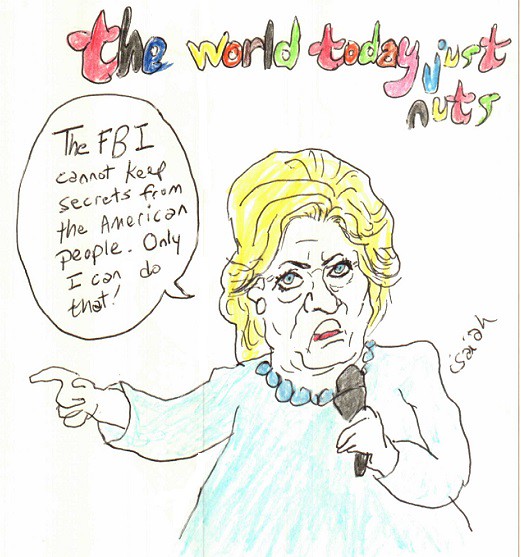 When does Hillary have to tell the truth to the voters?

Exposed for getting debate questions ahead of the debate and now exposed for what could be a criminal leak of an investigation, when does Hillary get honest with the voters?

George TakeiVerified account ‏@GeorgeTakei  21m21 minutes ago
The 1990s under the Clintons were a time of prosperity, government surpluses and no wars in Iraq or Afghanistan. #JustSayin #ThrowbackThurs
47 replies163 retweets430 likes

As we've noted before, a mind apparently atrophies when in a closet for decades.


Is Takei's head so far up his ass that he's not aware of the sanctions the Clintons carried out against Iraq and the deaths of approximately 500,000 Iraqi children as a result of those sanctions.

The 90s may have been a go-go period for Takei -- I have no idea what was going on in closeted lifestyles of the no longer rich or famous back then -- but it wasn't wonderful for the children of Iraq.


500,000 dead children.  In the words of Mad Maddy Albright (and apparently Takei agrees), it was worth it.

People should be on trial at the Hague.


Dropping back to yesterday's snapshot:


QUESTION: Okay. Can you update us on Mosul? It seems that the Iraqi army has made its first foray into Mosul proper, the city.

MR KIRBY: I don’t know that for a fact, Said. I have seen some press reporting to that effect. I am leery, as you know, to get into battlefield updates here. But what I can tell you from what I have learned outside of press reporting is that they are making progress, that their campaign is actually ahead of schedule, and they continue to prosecute the fight against [the Islamic State] in and outside Aleppo. But exactly where they are, as you and I speak, I truly don’t know the answer to that.

MR KIRBY: That is a better question put to my Defense Department colleagues. I don’t have the order of battle in front of me or what specific air support the Iraqis are getting. It is – I mean, it is a fact that coalition air support has assisted the Iraqi Security Forces on the ground for many, many months, and that the coalition air power was always intended to be part and parcel of the Mosul operation. But exactly what that entails on a day-to-day basis, I just don’t have that information.

QUESTION: Because I just want to follow up on our thing yesterday, as far as air support and the civilian population and so on.

MR KIRBY: I’m not aware that we’ve received any reports or credible allegations of civilian casualties caused by Iraqi Security Forces or the coalition thus far in the campaign. Again, I would encourage you to speak to my colleagues at the Pentagon. They track those things, as they should, more closely than we do here at the State Department. I’m not aware of any allegations of civilian casualties.

And I would say, as I said yesterday, we – we, the United States military in particular – takes extreme care and precautions against trying to – against causing damage to civilian infrastructure or civilians in general. And when we think we’ve done it, we investigate it. And when we know we’ve done it, we own up to that. We put a press release out after the investigation is over. And if people need to be held to account for that, well, we hold them to account. And that makes – that – we hold ourselves to a pretty high standard – and a higher standard, I might add, than virtually any other military in the world. So I guess I just don’t know if there’s been any reports.


Those reports are never credible to John Kirby.


And I'm sure the video isn't either.

In one of the more outrageous pieces of propaganda, THE INDEPENDENT serves up "The battle to liberate Mosul is bringing sectarianism in Iraq to an end."

War has brought peace, gushes the paper as it wets itself in excitement.

But reality is never quite as giddy.  Today, Human Rights Watch issued a press release:

(Erbil) – Kurdish authorities in Kirkuk, in their most recent round of displacements, have been ejecting Arab residents and Arab internally displaced people there since the Islamic State, also known as ISIS, attacked the city on October 21, 2016.
Human Rights Watch is not aware of any similar displacements affecting Kurdish residents of the city. Given that Arabs seem to be the sole victims of these demolitions and evictions, and no explanation has been given by the authorities as to why they are being so targeted, the KRG actions appear to be discriminatory.

“While KRG security forces are working to protect civilians from ISIS, they should ensure that their security measures don’t endanger civilians or undermine their rights,” said Lama Fakih, deputy Middle East director. “Forcing families out of their homes and into the streets or to unsafe parts of the country is a serious violation of their rights and does nothing to strengthen Iraq’s political cohesion.”
On October 17,  the Iraqi central government and KRG authorities, with the support of an international coalition, started military operations to retake Mosul, Iraq’s second largest city, which ISIS captured in June 2014. Anti-ISIS forces have also encircled the city of Hawija, 120 kilometers southeast of Mosul, which ISIS also captured in June 2014, and begun operations to retake the city. In response, ISIS fighters stormed police stations and buildings in Kirkuk, 150 kilometers southeast of Mosul, on October 21, killing about 100 security force members and civilians. It took roughly 24 hours for the Kurdish armed forces to subdue the ISIS attack.
On the morning of October 23, the Security Committee of Kirkuk Governorate issued an order to all internally displaced people living in Kirkuk who were not in camps to vacate their residences by 8 a.m. the following day. The order, which was posted online, specified that displaced people who wanted to remain in Kirkuk had to move into one of the camps for displaced people. It said that anyone who did not comply would be forced out, and their homes – mostly self-built brick structures – would be demolished. The statement was taken down within hours but the authorities seem to have carried out the order.
Human rights workers in Kirkuk told Human Rights Watch that on October 23, authorities forcibly displaced at least 250 families, and at least 75 on October 24, most from the June First neighborhood of southern Kirkuk. They destroyed at least 100 homes within the same period, the activists said. Two local people who witnessed the demolitions gave Human Rights Watch similar estimates.
On October 25, four Arab June First residents told Human Rights Watch by telephone that Kurdish Asayish and Peshmerga forces arrived in the neighborhood at 9 a.m. that morning with at least one bulldozer and three excavators and demolished their homes. One, aged 56, said he was born in Baghdad and has lived in Kirkuk for more than 40 years. Another, aged 53, is from Qarah Tappah, 14 kilometers west of Kirkuk, and has lived in Kirkuk for more than 20 years. Both said they had been expecting it after witnessing the demolitions of the previous two days, but had no official notification that they would have to leave.
Another longtime Arab resident of Kirkuk said that he heard security forces order displaced families from Hawija living in five homes to leave Kirkuk, but he did not know where they had gone once their houses were destroyed.
Human Rights Watch reviewed three videos that a neighborhood resident whose house was not destroyed filmed on October 25, showing what appeared to be dozens of houses reduced to rubble. Human Rights Watch is not aware of any injuries or deaths resulting from these demolitions.The neighborhood is more than 25 kilometers from the front line in the current operation to retake Mosul and Hawija. It was not affected by the ISIS attack in Kirkuk on October 21. There are no military structures in the area, which is mostly residential, said Kirkuk residents and Human Rights Watch researchers who visited the neighborhood earlier in 2016.