They have destroyed Black Agenda Report

What Betty said.  Go read her "Danny Haiphong has destroyed BLACK AGENDA REPORTER" and please note that Betty has been calling out Black Agenda Report's drift away from Black people for some time.

This African-American lesbian has no interest in an outlet that promotes White people over Black people and that will go out of its way to invite any piece of trash as long as they're White.  Yeah, I'm talking about convicted pedophile Scott Ritter who Danny Haiphong has now interviewed at least twice.  He can't find a Black person to interview but if you're a White registered sex offender, one who's been arrested multiple times and sent to prison after being convicted in a court of law, Danny'll bring you on BAR's Left Lens.

Black Agenda Report was supposed to be a place for Black people.  Danny clearly knows none -- maybe that's why he's such a little bitch to Dr. Jared Ball?

Then again, Jared's Black.  That's all Danny needs to be dismissive of him.

Through actions and statements, Danny's made it clear how little thinks of African-Americans.  Shame on everyone at BAR for allowing this non-Black to destroy the space that was created for and by African-Americans.

Thursday, June 30, 2022.  A new video makes clear how other countries take orders from the US to continue the persecution of Julian Assange, Iraq's record year of sandstorms continues and increases, a victory for veterans from the Supreme Court, we've found Jimmy Dore's presidential campaign slogan, and much more.  (Too much more, if you're Sy Hersh.)
Starting with this to-the-point video posted by Abbas Abdulmalik.
And it's not just funny, it's true.
US President Joe Biden persecutes Julian Assange.  His 'crime' doing journalism and telling the truth.  Exposing the US government's War Crimes.  Joe Biden could end the persecution at any point but he refuses to do so.
This persecution of Julian is about silencing the press.  Monday April 5, 2010, WIKILEAKS released US military video of a July 12, 2007 assault in Iraq. 12 people were killed in the assault including two Reuters journalists Namie Noor-Eldeen and Saeed Chmagh.  That is when the persecution begins.  It was an intimidation carried out by multiple presidents starting with Barack Obama, continuing with Donald Trump and now the baton for killing the press has been handed off to Joe Biden.
In 2020, Paul Daley (GUARDIAN) reported:


US prosecutors have failed to include one of WikiLeaks’ most shocking video revelations in the indictment against Julian Assange, a move that has brought accusations the US doesn’t want its “war crimes” exposed in public.
Assange, an Australian citizen, is remanded and in ill health in London’s Belmarsh prison while the US tries to extradite him to face 18 charges – 17 under its Espionage Act – for conspiracy to receive, obtain and disclose classified information.
The charges relate largely to the US conduct of wars in Iraq and Afghanistan, including Assange’s publication of the US rules of engagement in Iraq.


Dean Yates was the head of REUTERS' Baghdad beureau when the July 12, 2007 attack took place killing REUTERS journalists Namir Noor-Eldeen and Saeed Chmagh -- the attack carried out by the US government.  Daley quotes Yates stating, "What he did was 100% an act of truth-telling, exposing to the world what the war in Iraq looks like and how the US military lied … The US knows how embarrassing Collateral Murder is, how shameful it is to the military – they know that there’s potential war crimes on that tape."
In another article, Daley focused on Dean Yates:
Yates, shaking his head, says: “The US assertions that Namir and Saeed were killed during a firefight was all lies. But I didn’t know that at the time, so I updated my story to take in the US military’s statement.”
[. . .]

Reuters staff had by now spoken to 14 witnesses in al-Amin. All of them said they were unaware of any firefight that might have prompted the helicopter strike.

Yates recalls: “The words that kept forming on my lips were ‘cold-blooded murder’.”

The Iraqi staff at Reuters, meanwhile, were concerned that the bureau was too soft on the US military. “But I could only write what we could establish and the US military was insisting Saeed and Namir were killed during a clash,” Yates says.

The meeting that put him on a path of destructive, paralysing – eventually suicidal – guilt and blame “that basically f**ked me up for the next 10 years”, leaving him in a state of “moral injury”, happened at US military headquarters in the Green Zone on 25 July. 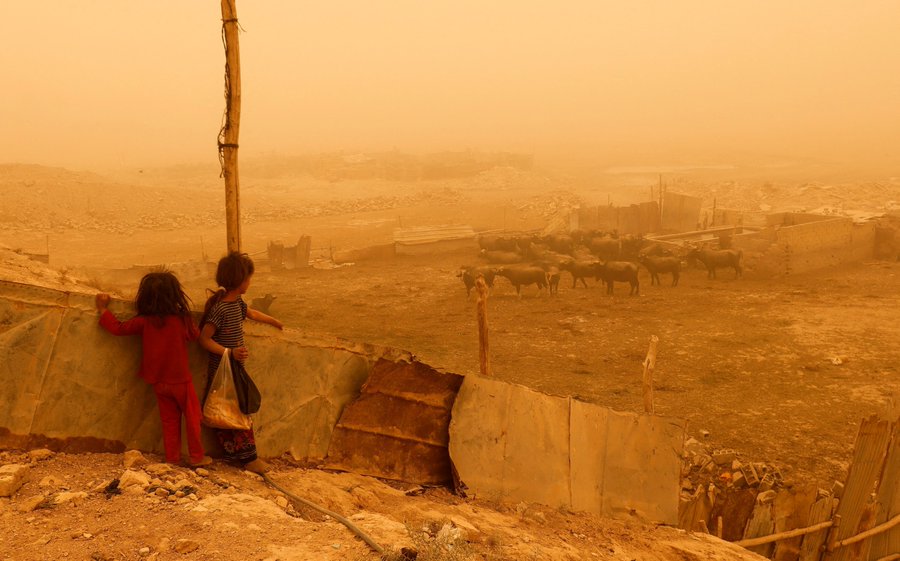 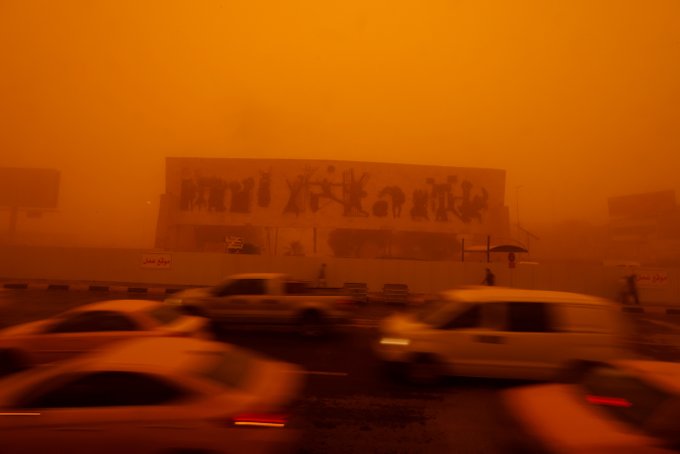 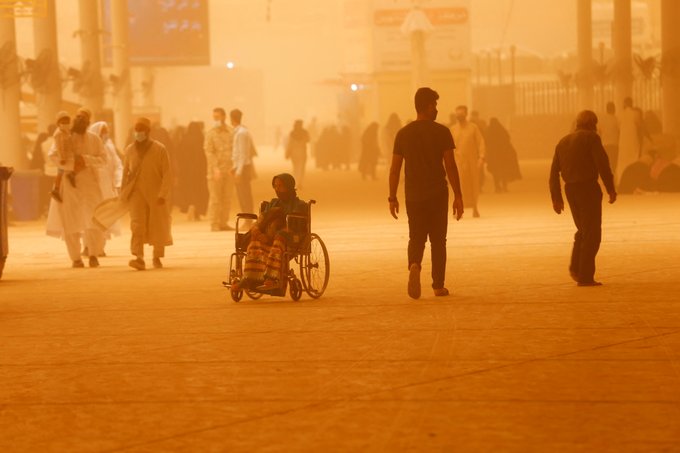 Visiting Baghdad, Iraq, during a trip to the region in May of 2022, I got to see and experience various aspects of the city, including several historical sites, such as the famous al-Mutanabbi street where one of Baghdad’s oldest cafes, Shahbandar, is located. Together with Kawa Hassan, director of the Stimson Center’s Middle East and North Africa Program, I talked to political activists and political science students about the aspirations they have for Iraq and the role of the international community in the country. In this field note, I will summarize some of my observations.

Entering Iraq was not difficult, as the country has since March 2021 made visas on arrival possible for 37 countries. Transport from the airport to the hotel was with an unarmored vehicle, and my colleagues and I were able to move through parts of the city by foot.

This seemed in contradiction to the fact that many employees of international organizations and embassies based in the Iraqi capital are confined to their housing compound, offices, and some green-lighted areas in the city. Embassies are in the fortified Green Zone, to which citizens have limited access, and diplomats follow a strict security protocol when they leave this International Zone (IZ). The Green Zone is also home to many Iraqi political leaders and the country’s parliament.

In five days, I was able to see parts of Baghdad that some international colleagues who have been in the country for months can’t visit.

Strangely, this meant that in five days I was able to see parts of Baghdad that some international colleagues who have been in the country for months can’t visit. Not for a moment did I feel unsafe. Nevertheless, the improvements made in security should not be taken for granted. Private security companies still surround hotels and some neighborhoods in Baghdad remain off-limits, as the threat of attacks and kidnappings remains.

Apocalyptic Baghdad: the Threat of Sand and Dust Storms

While Iraq has become safer when it comes to conventional security threats, the unconventional or indirect security threat of environmental degradation has increased. During the visit, a sand and dust storm (SDS) blanketed Baghdad, the eighth storm since April. Due to climate change and decades of poor agricultural and water-management, including a lack of cross-border cooperation, the number of sand and dust storms has heavily increased. Climate change and water mismanagement is also reflected in the low level of the Tigris river, which runs through Baghdad.

Environmental degradation has a major impact on agriculture and public health. The May 16 sandstorm, for example, put some 4000 people in the hospital. In addition, it can exacerbate social tensions, such as tribal and communal conflict. Government corruption and weak governance have formed an obstacle to dealing with the environmental issues at hand. And although there are a number of Iraqi environmental civil society organizations, they have been threatened by militias and certain elements of the security services, not in the least because of their association with the 2018-2019 Tishreen protest movement.

IRAQI NEWS AGENCY reports:
The Canadian government announced on Wednesday, its support for a catalyst climate action project in Iraq with $3.3 billion to solve the problem of climate change, indicating that the project provides an opportunity to alleviate water scarcity. The Canadian government is working in cooperation with the United Nations Development Program, the government of Iraq and the United Kingdom to support climate change initiatives as Canada contributes to this program within the Trans-boundary Water Program to increase Iraq's capacity, according to the Canadian Ambassador to Iraq Gregory Galligan in a speech during the launching ceremony of the project to catalyst climate action in Iraq, attended the Iraqi News Agency – INA.
We'll wind down with this from THE DALLAS MORNING NEWS:

In a ruling expected to have widespread impact on veterans nationwide, the Supreme Court on Wednesday allowed a former state trooper to sue Texas over his claim that he was forced out of his job when he returned from Army service in Iraq.

The justices ruled for Army veteran Le Roy Torres under a federal law that was enacted in 1994 in the wake of the Persian Gulf war to strengthen job protections for returning service members.

By a 5-4 vote, the high court rejected Texas’ claim that it is shielded from such lawsuits. “Text, history, and precedent show that the States, in coming together to form a Union, agreed to sacrifice their sovereign immunity for the good of the common defense,” Justice Stephen Breyer wrote for the court.

Justice Clarence Thomas, joined by three other conservative justices, dissented, arguing that “when the States ratified the Constitution, they did not implicitly consent to private damages actions filed in their own courts — whether authorized by Congress’ war powers or any other Article I power.” Article I refers to the part of the Constitution that spells out Congress’ power.

Torres says he suffered lung damage from exposure to open burn pits on his base in Iraq.

Of course, Clarence Thomas dissented -- impeach him already.  And then Glenn Greenwald can go back on FOX NEWS and tell the world again just how wonderful a person Clarence really is.

Le Roy Torres and his wife Rosie Torres are the founders of Burn Pits 360 -- an advocacy group for those who served and were harmed by burn pits.  Le Roy served in the Iraq War and he served in the US military for a total of 23 years -- we often note Burn Pits 360 here and run any newsletter or press release that is passed on.

Le Roy Torres worked for the Texas Department of Public Safety prior to his assignment in the so-called “burn pits” of Iraq – where U.S. troops toxically disposed of garbage by burning, as the court puts it, “all manner of trash, human waste, and military equipment.”

Returning home, the onetime military reservist received an honorable discharge and a lifetime ailment: constrictive bronchitis. The diagnosis includes what medical journals have described as “irreversible airflow obstruction.” Symptoms associated with the disease have been observed as statistically significant among veterans of U.S. military activity in both Iraq and Afghanistan.

“These ailments, Torres alleges, changed his life and left him unable to work at his old job as a state trooper,” Justice Stephen Breyer writes for the majority. “Torres asked his former employer, respondent Texas Department of Public Safety, to accommodate his condition by reemploying him in a different role. Texas refused to do so.”

Torres sued the Lone Star State in its capacity as a state under the Uniformed Services Employment and Reemployment Rights Act of 1994, which, relevant here, provides that U.S. states must use “reasonable efforts” to accommodate service-related disabilities or find an “equivalent” position or “nearest approximation” for veterans who return from foreign deployments with a disability that prevents the veteran from working in their former job. The Act in question applies to many employment scenarios; Torres’s state government employment was the key to this case.

Texas moved to dismiss the lawsuit under the doctrine of sovereign immunity. Each side won a victory in lower courts. Torres filed a writ for petition of certiorari. The justices ruled 5-4 in the veteran’s favor.

Ruling against Texas, Breyer’s relatively brief opinion spends considerable time reflecting on the history of the federal government raising armies for the national defense. Such efforts, the high court held, mean that states gave away some of their sovereign immunity when they ratified the U.S. Constitution and joined the union.