I don't see any real improvement

On Tuesday, the Biden administration formally ended the “Remain in Mexico” program, known formally as the Migrant Protection Protocols (MPP), which forced asylum seekers to stay in Mexico while their cases played out in US immigration courts. The move was celebrated by some immigrant advocates despite the fact that many Trump-era policies remain in place, including Title 42, which bans immigrants from entering the US under the pretext of stopping the spread of COVID-19.
The inhumane living conditions throughout the world, which are the product of capitalist exploitation and imperialist intervention, and drive immigrants to make the dangerous journey into the United States to seek asylum and a better life, have, of course, not gone away. While Biden promised to roll back the worst of the Trump administration’s policies, immigrants continue to die every day and countless numbers languish in detention camps under his watch.
This reality has been underscored by the recent drownings of immigrants off the coast of San Diego, California this year. On May 2 a smuggling boat carrying immigrants desperate to reach the US crashed near Point Loma, killing three and injuring dozens.
The tragedy, which occurred near a popular tourist destination, made international headlines but was not to be the only migrant death in the area last month. On May 20, the US Border Patrol and San Diego Fire-Rescue lifeguards spotted a boat which had sought to disembark migrants near the Children’s Pool Beach in La Jolla.
Ten people were rescued from “rough water conditions,” another person was found submerged a mile north, in an area called Wipeout Beach, but was pronounced dead at the scene.
In another incident in the same month, a panga boat was caught up in the surf line with 23 migrants on board who were then apprehended by Border Patrol and taken into custody.
The number of apprehensions at sea by San Diego Border Patrol agents was a record 1,273 incidents in fiscal 2019. So far this fiscal year, which will end after September, there have been almost 1,100 apprehensions. Border Patrol Agent Jacob MacIsaac told reporters, “We’re on pace to break that record again.”

Aren't we all glad there's such a huge difference between Trump and Biden? What's that? There's not? You are right. That's why we need a new political party. The duopoly is killing us, it's killing the whole world. A real party would address immigration, would address climate change, would end these forever wars and so much more.

We don't have leaders these days. As C.I. said in the gina & krista round-robin this week, "We have water treaders. They just barely keep our head above water and tread water." There is no progress without real leaders and responsive politicians.

Friday, June 4, 2021.  The Turkish government continues its assault on the Kurds, Qassem Musleh remains in custody, and much more.

As noted in yesterday's snapshot, the Turkish government has threatened Iraq, insisting that they make take their illegal bombings and raids further into Iraq.  THE ARAB WEEKLY puts it this way:

President Recep Tayyip Erdogan has warned Iraq that Turkey will “clean up” a refugee camp which it says provides a safe haven for Kurdish militants, threatening to take its long military campaign deeper inside Iraqi territory.

Turkish forces have stepped up attacks on bases of the outlawed Kurdistan Workers Party (PKK) inside northern Iraq over the last year, focusing their firepower and incursions mainly on a strip of territory up to 30 kilometres inside Iraq.

But Erdogan said Makhmour, a camp 180 kilometres south of the Turkish border which has hosted thousands of Turkish refugees for more than two decades, was an “incubator” for militants and must be tackled.

“Rather than bomb Makhmour, the government should be responding to the question of why Makhmour was established to begin with and why tens of thousands of Kurdish citizens of Turkey are living in a refugee camps in Iraq.” https://al-monitor.com/originals/2021/06/erdogan-threatens-strike-refugee-camp-inside-iraq
with
@hisyarozsoy
@arzuyldzz

Erdogan threatens to strike refugee camp inside Iraq
The rhetoric against Makhmour, a settlement where residents are overwhelmingly sympathetic to the Kurdistan Workers Party, could be part of a strategy to divert

From her AL-MONITOR article:

Hishyar Ozsoy, a lawmaker for the pro-Kurdish Peoples’ Democratic Party, said if Erdogan could get the blessings of Baghdad and the United States, attacking the town of Makhmour “isn’t something he would not do.” Ozsoy told Al-Monitor, “For a long while Makhmour and Shingal have — alongside Qandil — been cited as targets by the Turkish government.” Shingal is another name for Sinjar, the Yazidi-dominated region overlooking Syria, which Turkey claims is a strategic foothold for the PKK.

An unnamed Iraqi official cited by Reuters said Turkey had complained last week to Baghdad about “terrorist activities” launched by the PKK “from their camp in Makhmour.” The official said security officials had sought to investigate claims but were denied access to Makhmour by PKK fighters. It’s unclear how the PKK would attack Turkey from Makhmour given its distance from the Turkish border.

“Instead of resolving the Kurdish matter through dialogue [the Turkish government] is determined to persist in its militarist policy, attacking everywhere, including civilian settlements and refugee camps,” Ozsoy said. “Rather than bomb Makhmour, the government should be responding to the question of why Makhmour was established to begin with and why tens of thousands of Kurdish citizens of Turkey are living in a refugee camps in Iraq.”

The area that Turkey wants to target for 'PKK' is also an area heavily populated by the Yazidis.  Who are the PKK?  Aaron Hess (INTERNATIONAL SOCIALIST REVIEW) described the PKK in 2008, "The PKK emerged in 1984 as a major force in response to Turkey's oppression of its Kurdish population. Since the late 1970s, Turkey has waged a relentless war of attrition that has killed tens of thousands of Kurds and driven millions from their homes. The Kurds are the world's largest stateless population -- whose main population concentration straddles Turkey, Iraq, Iran, and Syria -- and have been the victims of imperialist wars and manipulation since the colonial period. While Turkey has granted limited rights to the Kurds in recent years in order to accommodate the European Union, which it seeks to join, even these are now at risk."

The PKK is not the inciting incident.  The PKK is a response.  It emerges after slaughter and persecution.  Just as the Turkish government still refuses to take accountability for carrying out the Armenian genocide at the start of the 20th century, they refuse to take responsibility for their attempts to destroy, to eradicate, the Kurdish people.

The Kurds have no homeland so they've been pawns on the geopolitical chess board for years.  Their struggle has largely been rendered invisible by a global media.  Even now, as Recep threatens -- that is the word -- western outlets water it down to he 'warns' -- he's not warning, he's making a threat.  He's talking of breaking more laws.  But the western media insists that they are uses 'neutral' language.  No, they are intentionally misleading.

We'll note this from AHVAL:

That's exactly what it is, the war you don't see.

On Thursday, the President of the Republic of Iraq, Barham Salih, said, “cutting down forest trees is an environmental crime,” referring to Turkey’s cutting down of trees within the borders of the Kurdistan Region of Iraq.

This came days after forests in the north of Duhok governorate were exposed to, what activists and environmental organizations described as, genocide by Turkey.

“Encroachment upon State sovereignty, violence, and the displacement of civilians from their homes in Harur, Bativa and other border areas in Kurdistan Region, are inhumane practices that should not be ignored,” Salih tweeted.

He attached his tweet with a picture of logged trees, which social media users said, were cut off by the Turkish forces.

“Practical coordination between the authorities of the federal government and Kurdistan Region is our duty in order to stop abuses and hold the guilty accountable,” the Iraqi president added.

Photos and videos posted online show logging of trees in northern #Iraq, linking this with Turkish military presence in the fight against the PKK, causing outrage among communities and politicians. Let’s find out what satellite imagery can tell use on what’s happening there 1/x

Northern Iraq - you mean Kurdistan. It’s Kurdistan in which they’re performing these acts of ecocide. It’s Kurdish people that are being affected by this. It’s the name “Kurdistan” that they’re trying to erase - so say it loud and proud. Hêr bijî Kurd & Kurdistan

Pro-ISIS websites published a statement from the group in which they claimed their fighters detonated an explosive device at a "gathering of the Rafidah [Shiite] infidels" in the Kadhimiya area, killing three people and wounding more than twenty others.

The Iraqi military’s Security Media Cell said the blast was the result of an exploding gas pipe in a shop. It did not report any deaths, but stated some people were injured.

Staying with violence, militia commander Qassem Musleh was arrested last week with reports out of Iraq noting this was due in part to the assassination of two activists.  KIRKUK NOW Tweeted:

the Iraqi forces liberated Iraq & capable to do it by itself yet the PMF accelerated the process," he added. On May 26th, Iraqi forces arrested Qassem Musleh, a commander of PMF, accused of murder of activists. In response, PMF took to Baghdad streets & besieged the Green Zone. 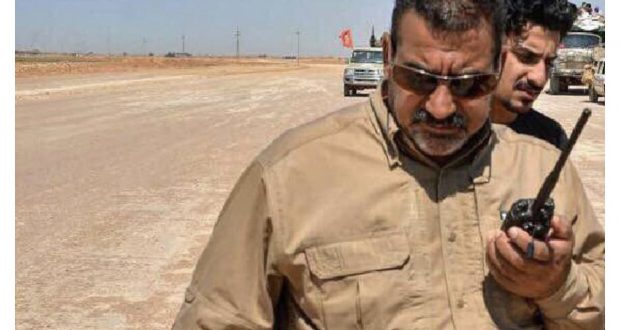 Here we have the mother of the activist “Ihab Al-Wazni” accuses “Qassem Musleh” of being involved in threatening and killing her son Ihab who was the leader of the Karbala Demonstrations. She says “Musleh said to my son, I will kill you, even if one day remains in my life”
4:22 PM · May 29, 2021

Prime Minister Mustafa al-Kadhimi ordered the arrest.  Former prime minister Hayder al-Abadi has praised the move stating that no one is above the law.  That point of view isn't found in Mina Aldbroubi's latest piece for THE NATIONAL:

Iraq’s refusal to release paramilitary commander Qassem Musleh a week on from his surprise arrest could lead to long-term security repercussions, experts have told The National.

Mr Musleh, leader of Popular Mobilisation Forces (PMF) operations in Anbar province, was arrested in Baghdad last Wednesday on suspicion of terrorism and in connection with the targeted killing of civil society activists and protesters.

Tensions in the capital skyrocketed when PMF fighters taking to the streets around the office of Prime Minister Mustafa Al Kadhimi, prompting him to deploy Iraqi security forces and the elite Counter-Terrorism Service to protect the government and diplomatic missions.

The standoff sparked fears of violence as some armed PMF factions gathered at the entrance to the fortified diplomatic Green Zone in Baghdad. But, so far, the situation has remained stable.

A previous attempt by Mr Al Kadhimi to have PMF fighters arrested led to similar standoffs and threats of violence before the gunmen were ultimately let free.

But, Mr Musleh remains in custody and the Iraqi government believes it has solid evidence linking him to the recent assassination of activist Ihab Al Wazni in the southern city of Karbala. Judicial and security sources also told Reuters that he was wanted in connection to rocket attacks on US and international forces in Iraq.

The next step for Mr Al Kadhimi’s government will be to file charges and bring Mr Musleh in front of a judge.

'Experts' have not worried about what letting killers walk has meant throughout this nearly three year wave of assassinations targeting activists (and journalists) in Iraq.  ''Experts'' haven't concerned themselves with the rule of law.  Now 'experts' are concerned?  Now?