Keep watching THIRD this morning.  Ava and C.I. weigh in on THE GIRL.  I'll provide links next time.  They did not like the book.  At all.  And I see why.  You will too when you read their latest.

Usher is someone I've liked for years.  No crush on him (I'm a lesbian) but I really respect his music and his ability to create a sensual mood with it.  I've seen him in concert three times, so that should give you an idea of how big a fan of his I am.

I didn't even know he had a new song out.  He released it last month.  My girlfriend played it for me tonight and was surprised I hadn't heard it.  Maybe I'm just reaching for what I know these days?  Due to the pandemic?  I find myself listening to a lot of Diana Ross and Bobby Womack lately.  That's what I chill out to.

Before I forget, Isaiah's THE WORLD TODAY JUST NUTS "Nancy and Ginger Joe" went up Sunday. 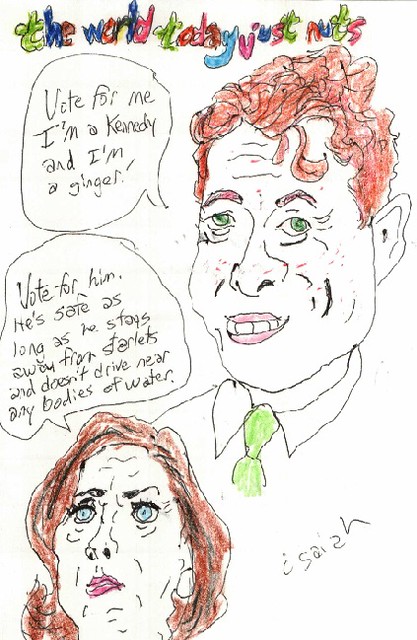 Tuesday, August 25, 2020.  Republicans hold a convention -- didn't they do that last week?, Joe has no bounce and the assassination of Reham Yacoub continues to result in outcry.

Last week, Republicans got to speak at an informercial passed off as a convention, this week they do the same.  The difference?  This week is actually the Republican convention.  Last week was the Democrats convention -- or it was supposed to be.  Instead, War Criminals like Colin Powell traipsed across the stage as if to say: They're not a dime's worth difference between the two parties.

Last week, men who would control women's bodies were allowed to take the stage at the DNC and were applauded and held up as people to admire.  Men who would gut public education were cheered.

It was appalling and yet you have idiots and liars and whores who wanted to pretend that it was something to see.

Steven Shepard (POLITICO) notes Joe has no convention 'bounce' (where your popularity surges following a thrilling convention) and Andrew Romano (YAHOO NEWS) notes the same.  At what point do people start to consider the reality: The wrong person got the nomination.

Joe's plan is hide out until election day.

If Donald Trump were to agree to hide out as well, that might work.  But he's not going to.  He's going to make efforts to energize his base.

The Covid attacks on Donald are already misfiring.  People are noting that Joe offered nothing during this time and that, as one person we spoke with yesterday put it, "Now all he does is hide away from the people sending me the message that Joe will protect himself only.  He can't lead because he won't get outside and lead."

It was comments from the various groups we spoke to at this time in 2016 that had me issue the statement that Hillary was going to lose and she was actually in a stronger position than Joe is right now.  Is Joe going to lose?  I don't know.  Maybe he'll get off his lazy ass and start trying to give people a reason to vote for him -- instead of just offering 'vote against Trump.'

People are already questioning whether Joe's fit for the job.  Having him hide out for the month of September isn't going to help.

People are rightly complaining that CNN's Brian Seltzer is fact checking the GOP convention after 'forgetting' to do that for the DNC.  That's a valid complaint.  But there's far worse going on.

A moment: Joe Biden choking up mentioning Beau's service in Iraq, and then saying, "America will not turn a blind eye to Russian bounties on the heads of American soldiers. Nor will I put up with foreign interference in our most sacred democratic exercise -- voting.” #DNC2020

That's Courtney Norris.  She's a national affairs producer for PBS' THE NEWS HOUR -- meaning, we pay her salary.  There is no proof that Russia has a bounty on the heads of US troops.  That claim fell apart as soon it was published.  But weeks later, Joe Biden lies and Courtney presents it as fact.

I don't really think her garbage should be allowed at PBS.  Next up, Courtney Tweets that Iraq has WMDS!!!! Cites NYT as her source!!!!

What did Tulsi have to offer that wasn't on display?

She'd already lied and whored for Joe Biden so what else did she have to offer?  Yes, it must be very hard for her, after lying for him in the July 31st debate, after publicly trashing the only person to stand up to Joe (Kamala Harris), it must have really hurt Tulsi that she didn't get picked for v.p. and she didn't even get to speak at the convention.

But she had nothing to offer.  She ran as an anti-war voice and yet she used her debate time to prop up a War Hawk.  That's on her.  Tulsi Fake Ass.

Can we learn anything by the time 2024 rolls around?  Like don't believe people who say they're anti-war and talk big on Joe Rogan's show but then refuse to stand up in a debate.  If you see that happen again, have the brains to drop all support for the fake ass.

She endorsed Joe, not Bernie.  Remember that.  Tulsi stood for nothing.  She was empty talk.  Adam Kokesh called it and he was right.

But public anger at the Kurdish regional government (KRG) has grown in recent months, prompting protests over unpaid state salaries and Turkish incursions into border areas.

Demonstrators and rights defenders say the rallies have been met with a heavy-handed response from security forces -- with reporters increasingly targeted.

"Despite laws guaranteeing press freedom in the region, when political and economic crises intensify, the limits on press reach a point of strangulation," warned the region's Metro Center for Journalist Rights and Advocacy.

Meanwhile, the Iraqi government insists that they are close to finding the people (militia) responsible for killing the activists in Basra.  Among those killed is Reham Yacoub.

#ريهام_يعقوب she was a beautiful human she lived great done amazing and died over a terorrist!! what a world!?! she made a point we love u and thank you for everything you've done to the women in your country you were the screaming voice of the silence unfair RIP #RehamYacoub

Reham Yacoub, REUTERS notes, had been active "in the local protest movement since 2018 and had led several women's marches." PERSECUTION.ORG adds, "These events have caused an outcry of alarm by many Iraqis, who remember the frequency of targeted kidnappings and assassinations during the early 2000s. The latest series of incidents occur within a similar environment in that there is an increase of militia tension. In Iraq’s current domestic landscape, many of these militias are heavily backed by Iran." Iraq Tweets notes:

Two years ago, they falsely labelled her as a traitor. And today, they ruthlessly killed her along with her friend. No matter what they say, we all know that her murders and the cowards that they work for are the true traitors of Iraq. Rest in power, Reham Yacoub.

Demonstrators on Friday set fire to the parliament's local offices in the city of Basra as security forces fired live rounds in the air to disperse them. They had gathered to demand the dismissal of Basra Governor Asaad al-Eidani after two activists were killed and others wounded in three separate attacks by unknown gunmen last week.

Iraqi Prime Minister Mustafa al-Kadhimi arrived in Basra late on Saturday in an attempt to quell the unrest, pledging to bring those accountable for the killings to justice.

"Basra will recover again, God willing. This is a message to all criminals and killers, this is a new government that is working to establish the prerequisites of security," al-Khadimi told crowds in Basra.

Protests continue over the assassination of Reham Yacoub: