Okay, an e-mail came in noting this:

I want to suggest you share an important research that came out last week. It found that over 96% of government websites exclude disabled men and women from showing on webpages.
https://www.websiteplanet.com/blog/government-websites-exclude-disabled-men-and-women-from-non-health-related-webpages/


The challenged and the disabled are all around us.  They are us.  We have grown a lot as a people.  Yes, then-President Barack Obama mocked Special Olympics when he went on The Tonight Show.

But that's a minor opinion and approach.

Thank you for the e-mail and I'm happy to note the link you provided.

Aaron Maté‏Verified account @aaronjmate 7h7 hours ago
The irony of @maddow 's now debunked claim is that it was centerpiece of a lengthy segment that culminated in her accusing Trump & the Russians of "deliberate trafficking in unreality." An apt description of her own Russiagate coverage: (https://theintercept.com/2017/04/12/msnbcs-rachel-maddow-sees-a-russia-connection-lurking-around-every-corner/ …) pic.twitter.com/2OXbHhUDHa
17 replies67 retweets144 likes
Show this thread


Let's start with the press because they're such an 'injured class.'  They're feelings are always hurt even though they're somewhere lower on the food chain then a whore because at least a whore provides pleasure before they steal your money.

Nikki Wentling‏ @nikkiwentling 18h18 hours ago
Nikki Wentling Retweeted Philip Rucker
The Office of Special Counsel reported this year that the VA has been "sluggish" to respond to problems until they are thrust into the public spotlight by the press. Just something I think we should all keep in mind right about now. stripes.com/news/special-c…
Nikki Wentling added,
Philip RuckerVerified account @PhilipRucker
“Stick with us. Don’t believe the crap you see from these people, the fake news," Trump says at Veterans of Foreign Wars convention. Scores of veterans, right on cue from commander in chief, point to press riser and boo and hiss.
10 replies95 retweets242 likes


Nikki is a reporter for STARS AND STRIPES.  Nikki got her wittle feelings hurt.  DOn't bring up the special counsel report if you're STARS AND STRIPES because the primary news outlet when it comes to the VA -- in terms of exposing -- has been USA TODAY.

STARS AND STRIPES has done damn little.  We were at the hearing where Eric Shinseki admitted that they knew the veterans wouldn't receive their tuition checks.  It was the first scandal of his term.  He was told about the problems when he was sworn in that January.  September rolled around and what happened?  The VA (and convicted felon Corrine Brown who is behind bars at this time) blamed the colleges.  And when Eric Shineski, Secretary of the VA, finally admitted that he knew all along that the checks wouldn't all be arriving on time, we reported what he said.  STARS AND STRIPES was at that hearing.  They never reported on it.

Or how about the hideous Allison Hickey?  A VA official so STARS AND STRIPES didn't go after her.  We called her a liar here back in the '00s because that's what she was.  And Democratic after Democrat in the House called her out and noted that her statements turned out to be false from one hearing after another, one Democrat predicted in a 2012 hearing that she would be gone by 2015 (she did end up resigning that year) and all the problems she'd claimed to have fixed would still be present (and they are).  We covered that hearing.  Not only did we report on it here, the Democrat's words to Hickey made a "Truest statement of the week" that year (2012) at THIRD.

The press did a lousy job confronting Hickey and reporting the reality on her.  It was well into Barack's second term before they finally began to seriously question her -- years after Democrats in Congress had laid the groundwork.

Seth Moulton‏Verified account @sethmoulton 14h14 hours ago
Seth Moulton Retweeted Jim Sciutto
The press is a continual thorn in the side of Members of Congress like me, and it was often a pain in Iraq, but a free press is so essential to democracy it’s one of the first things the Marine Corps worked to establish after the invasion. #FirstAmendment
Seth Moulton added,
Jim SciuttoVerified account @jimsciutto
“We were disappointed to hear some of our members boo the press. We rely on the media to help spread the VFW's message, and CNN, NBC, ABC, FOX, CBS, and others on site today, were our invited guests. We were happy to have them there.” - @VFWHQ after Trump speech today


Was it a pain in Iraq, Seth?  Really?  You don't know much about pain then because the bulk of the press there was embeds -- certainly the ones you encountered were -- and they did what they were told.  As Christian Parenti infamously noted, Dexter Filkins was set to interview the head of an insurgent group and then the US military brass made clear they didn't want that to happen so Dexy cancelled the interview.  Free press, Seth?  Or how about our the entry we did here, three days after this site started, about Dexy's long road into print -- that happens when you let the military vet your copy (and, yes, that is a no-no).  Dexy went on to win an award for that bad writing.  Somehow he missed the use of White Phosphorus and everything else that went on in the battle but, hey, the military brass liked the story and that's (apparently) what mattered.

Daniel Sardiñas‏ @Daniel5371902 16h16 hours ago
Replying to @queersocialism
The NYTimes and Washington Post normalized and agitated for the Iraq war before the bombs even started falling. Mainstream media are nothing but an arm of the US empire, the anti-Trump stuff is just a family food fight.
0 replies6 retweets11 likes

That is what happened.  The press doesn't do much of a job at all.  We need to stop pretending otherwise.  Not only did, for example, THE NEW YORK TIMES sell the illegal war, when the illegal war proved to be all that those of us opposed to it said it would be, NYT didn't get rid of their columnists who got it wrong or rush to find peace columnists or even left ones.

Abes #FBR‏ @Labialeden 20m20 minutes ago
Replying to @greenhousenyt
Friedman lost all credibility ever since he was a big cheerleader for W's Iraq War.
0 replies0 retweets0 likes


Apparently the big banks were the only ones 'too big to fail.'  After selling the Iraq War, the press did nothing to demonstrate that they learned one damn thing from it.


On the press, "Seymour Hersh meanders throughout REPORTER: A MEMOIR" went up Saturday.  I said in a snapshot last week that I'd try to read it and write a review.


Iraq barely appears in the book.  Kind of like the way it's ignored by the bulk of the press today.  They certainly have ignored the birth defects in Iraq due to the US government's use of various chemical weapons.

DSA Veterans Working Group  🌹‏ @DSAVeterans 17h17 hours ago
The US invaded Iraq to destroy (non-existent) WMDs, employing weapons which created a health crisis. We owe it to the Iraqi people to comprehensively research ALL possible links between US bombardment and rates of birth defects and cancer in Iraq #14DaysofResistance #DropTheMIC 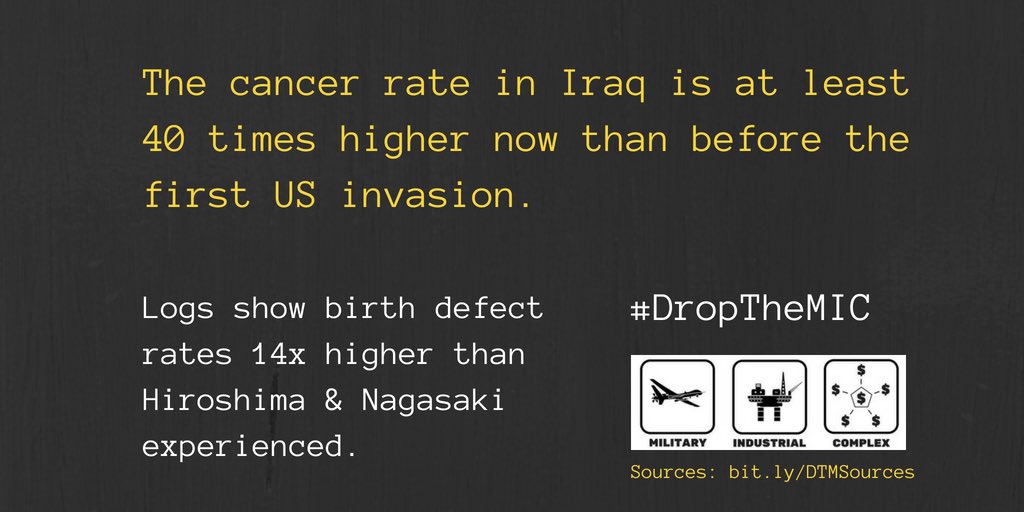 About Face: Veterans Against the War, Veterans For Peace, Vets4Bernie and 7 others
1 reply16 retweets20 likes

Vets4Bernie‏ @vets4bernie 15h15 hours ago
Today is Day 11 of #14DayOrders #14DaysOfResistance ICYMI: CPT .@BrittDeBarros is being investigated by her command for tweeting the govt’s own facts about US militarism. The US war on Iraq led to a major environmental & health crisis:

A free press would be reporting on that.  Maybe if we could somehow tie some conspiracy theory about Donald Trump to the birth defects, they could cover it?  Donald made a deal with Martians in 1999 that if they'd help him become president, he'd never mention the birth defects in Iraq?

Let's stay with Donald for a minute.  International Crisis Group's Wendy Taeuber has a column at THE HILL where she argues that the administration is about to make a mistake with regards to aid to Iraq:


This month United States Agency for International Development (USAID) Administrator Mark Green co-led a delegation to Iraq to assess how to streamline aid to persecuted ethnic and religious communities - namely Christians and Yezidis. While perhaps well intentioned, the Trump Administration’s plan to target assistance toward specific religious or ethnic groups in Iraq risks doing more harm than good.
While the Christian and Yazidi communities in Iraq have indeed suffered greatly at the hands of ISIS, the impact of the conflict crosses ethnic and religious lines. ISIS inflicted terrible abuses on any who opposed their ruleand the military operation to retake territory from the group devastated civilian lives and infrastructure without discrimination. The scale of ongoing humanitarian need is massive in Iraq, where 8.7 million people continue to require aid.
Deciding in advance who deserves aid and who doesn’t undermines the very principles of humanitarian action, including the basic tenet that assistance is provided solely on need and is not used as a tool to advance political, military, or security objectives. For aid organizations working in conflict settings around the world, our ability to effectively demonstrate that our limited resources are allocated based on prioritized needs, free from external influence, is vital to building trust with communities and cultivating a reputation for independence and impartiality with authorities that allows us to safely and effectively reach the people most in need.

Sorry but that's happened for over a decade now.

Communities have been cut off from aid throughout the now 15 year old Iraq War.

Do I think this new plan is going to work?  I doubt it.  But it might and at least it's an effort to try something different after seeing some communities ignored repeatedly year after year.


ALBAWABA notes, "Ongoing demonstrations in southern Iraq -- which erupted earlier this month and have since spread to the capital -- have reportedly left 14 people dead and more than 700 injured."


#amnstyinternational says #Iraq authorities “Deliberately disabling the internet is a sinister restriction to the right to freedom of expression and strongly indicates that the authorities have something to hide."
0 replies1 retweet1 like

Mohammed Tawfeeq‏Verified account @mtawfeeqCNN Jul 19
#amnestyinternational said in a statement “We are closely monitoring the escalating situation across southern #Iraq and are extremely worried by reports that security forces are beating, arbitrarily detaining and even opening fire on peaceful protesters,” #protests
0 replies2 retweets0 likes


Amnesty International was addressing the issue last week.  Maybe if Human Rights Watch employees could drop the conspiracy theories, they'd have noticed it last week instead of this week?  Sarah, editing an exchange out of a press conference does not make it "a fake press conference."  It makes it an edited video and it makes it a censored video.  And these edits happened when Barack Obama was president as well -- even if Rachel Maddow didn't scream from her padded cell about it.

There are real issues in the world.  HRW doesn't seem interested in those issues -- or in human rights -- if you check out their Twitter feeds.  They're conspiracy nuts, that's what they look like and this will come back to bite them long after Trump is gone.

Max J. Joseph  🔴‏ @DeadmanMax 1h1 hour ago
Max J. Joseph  🔴Retweeted Reuters Top News
Whilst protests rage in the south of Iraq over corruption, services and the oil industry, there is a totally neglected issue in the north. An entire region is dying of thirst, with farmers unable to resume work due to lack of water and irrigation, nevermind rebuild their homes.
Max J. Joseph  🔴added,
Reuters Top NewsVerified account @Reuters
Special Report: How Iraq's agricultural heartland is dying of thirst reut.rs/2A8ONZo
1 reply5 retweets3 likes

Kat's Korner (of The Common Ills)
?
25 minutes ago

Mikey Likes It!
Hillary Clinton sure knows a lot of creeps
14 hours ago

Sex and Politics and Screeds and Attitude
no to secret courts and star chambers
16 hours ago
Posted by Marcia at 6:23 PM