Friday's episode of The Originals was a vast improvement over the week before.

Davina was the episode's only professional victim.

Freya went up against Lucien only to learn that her spells could irritate him but not permanently harm him.

Hayley and Cassie teamed up to rescue Klaus from Lucien and to put Crazy Eyes into the equivalent of suspended animation because she drank Lucien's potion and, if she dies, she too will be reborn as something greater than an Original.

Now they're prepared to go after Lucien.

There was a lot of back and forth in the episode but not a lot of forward movement.

Kol was sent out of town by Marcel but he can't leave town without being in great physical harm so he decided to turn back to prevent the pain.


Saturday, April 16, 2016.  Chaos and violence continue, the US Secretary of Defense announces the administration's goal of more US forces on the ground in Iraq, the Parliament continues to bicker, and much more.

Saturday, the US Defense Dept announced/boasted:

Strikes in Iraq
Attack, ground-attack, fighter and remotely piloted aircraft conducted 15 strikes in Iraq, coordinated with and in support of the Iraqi government:

Task force officials define a strike as one or more kinetic events that occur in roughly the same geographic location to produce a single, sometimes cumulative, effect. Therefore, officials explained, a single aircraft delivering a single weapon against a lone ISIL vehicle is one strike, but so is multiple aircraft delivering dozens of weapons against buildings, vehicles and weapon systems in a compound, for example, having the cumulative effect of making those targets harder or impossible for ISIL to use. Accordingly, officials said, they do not report the number or type of aircraft employed in a strike, the number of munitions dropped in each strike, or the number of individual munition impact points against a target. Ground-based artillery fired in counterfire or in fire support to maneuver roles is not classified as a strike, officials added.

These bombings began in August of 2014 and have continued daily.

And have accomplished so little.

AP reports, "The US wants to do more in the fight, Carter said, and is 'only limited by our own ingenuity' and ideas. Carter expressed confidence that the White House will approve recommendations, saying nothing he has asked President Barack Obama for yet in the conflicts has been turned down."


Or AP 'reports' since that really wasn't the big news of those remarks.


Let's go to the DoD transcript for US Secretary of Defense Ash Carter's actual remarks:


SEC. CARTER:  Across the whole spectrum.  You know we're looking to do more, but it ranges from in the air to on the ground.  All consistent with our overall strategic approach, which is to enable local forces ultimately to hold and sustain the defeat of ISIL, after ISIL is defeated, but to enable them to do so and accelerate that process so we continue to look for and identify ways of accelerating that, and as we find those we will do them.  Obviously in Iraq we do that with the permission of the Iraqi government.

But we -- you should expect us to -- to see us doing more, to be consistent with the same approach, but it will be across all the domains, right up to cyber, which I mentioned earlier.

Now over the next few days I'll have an opportunity to talk to our commanders, and also to some in the region here, and obviously look for more good opportunities to accelerate the defeat of ISIL here in Syria and Iraq, which is absolutely necessary.

SEC. CARTER:  Yes, I mean, I think some of these have that aspect to it, but I just want to emphasize there's a lot more that goes with this, and our -- and our presence on the ground is -- and will continue to be to enable, not to substitute, for local forces.


So the big takeaway there?

". . . We're looking to do more, but it ranges from in the air to on the ground" meaning "more US troops on the ground in Iraq."


The Secretary of Defense is openly addressing the desire of the administration to put more US troops on the ground in Iraq.


A group of Iraqi lawmakers said they would not take part in a Saturday parliament session to select a replacement for the speaker, apparently leaving it without the necessary quorum.
Iraq was on course to have two rival claimants to the speakership, further increasing chaos in parliament, which has already seen a vote to sack speaker Salim al-Juburi, a fistfight among MPs and a sit-in this week.

An official session planned for Saturday had earlier been postponed for “security reasons," according to parliamentary spokesman Imad Al Khafaji. The protesting lawmakers gathered at parliament anyway, but later dispersed when it became clear they did not have the numbers to topple the speaker.
The protesting lawmakers vowed to hold the vote next week. An earlier attempt on Thursday had also failed for lack of a quorum.
The lawmakers are demanding that Iraq’s top political leadership, including prime minister Haider Al Abadi, step down – accusing them of failing to reform a political system steeped in patronage. Earlier this week, MPs held a multi-day sit-in at the assembly.


ALL IRAQ NEWS reports that Speaker Salim al-Jubouri spoke with Shi'ite cleric and movement leader Moqtada al-Sadr today in an attempt to strengthen support for al-Jubouri.  AL MADA notes that Moqtada is calling for the Cabinet of Ministers to be replaced with Haider al-Abadi's latest slate (which is being called a slate of "technocrats").

Which really means that Moqtada says that the Constitutional system is depleting resources.

Meanwhile IRAQ TIMES notes that the Dawa Party has called out "hollow statements and slogans" being mouthed by some politicians.  ALL IRAQ NEWS explains that was a response to Moqtada who had decried the failure of someone's third term as prime minister -- referring to Nouri al-Maliki who was forced out in August 2014 by the White House.


Nouri is accused of working behind the scenes to destroy any movement one way or another in his efforts to bring down Haider al-Abadi so that he can return as prime minister.


Suadad al-Salhy (MIDDLE EAST MONITOR)  reports on some of the behind the scenes maneuvers:


Last week, Amar al-Hakim, head of al-Mouatin Bloc; Osama al-Nujaifi, head of Sunni United Forces; Salih al-Mutlaq, head of al-Hiwar; Hadi al-Amiri, head of Badr; Joubori, speaker of parlamient; Fouad Masoom, the president; Abadi and a few others signed a document called the"National Document of Reformation".
The document aims to maintain the political power-sharing agreement and deepen the influence of the political blocs over top government posts and decisions. The document, which was obtained by MEE, included 12 items. Most were written in a way that serves to maintain the power-sharing system.
"Establish a consultative political council alongside the prime minister, president and speaker of parliament, whose members include the leaders of the essential political forces in the country… to be held monthly to discuss strategies of the country," one of the items reads.
"The political blocs will present their nominees for the cabinet to the prime minister and he can choose them in a way asserting national (power) sharing," another item reads.


And we'll return to the US to close with this from Iraq and Afghanistan Veterans of America: 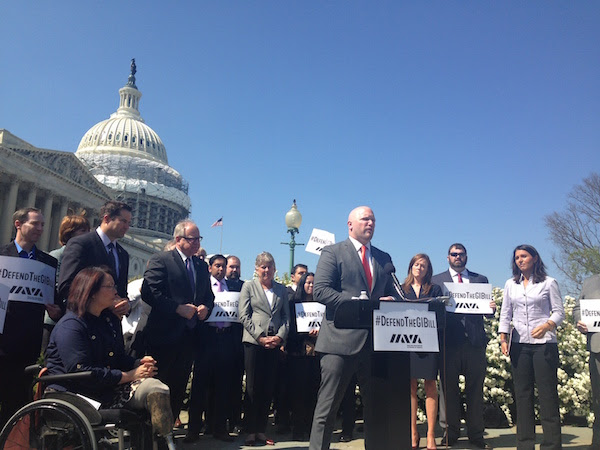 WASHINGTON (April 14, 2016) — Today, Iraq and Afghanistan Veterans of America (IAVA), its members and other veteran service organization partners joined Reps. Seth Moulton (D-Mass.), Tim Walz (D-Minn.), Brad Ashford (D-Neb.), Tulsi Gabbard (D-Hawaii), Tammy Duckworth (D-Ill.), Kathleen Rice (D-N.Y.), Gwen Graham (D-Fla.), Julia Brownley (D-Calif.) and Beto O’Rourke (D-Texas) at the U.S. Capitol to urge Congress to defend the Post-9/11 GI Bill from funding cuts. The greatest education investment in our veterans since WWII has recently come under attack with the House passage of H.R.3016, which calls for a 50 percent cut to the housing allowance that children receive if their military or veteran parent transfers the benefit to them. A similar bill (S.425) is making its way to the Senate floor and IAVA is calling on all Members of Congress to pledge to defend the Post-9/11 GI Bill from this and any future cuts to the vital program. IAVA will oppose the omnibus as a whole and call on the president to veto the bill if it is passed with the cuts intact.


“It is embarrassing that we have to come here and beg our elected officials not to steal from the pockets of our military, veterans and their families,” said IAVA Founder and CEO Paul Rieckhoff. “As we stand in front of the U.S. Capitol, men and women are fighting in a prolonged war in Afghanistan and ongoing conflicts in the Middle East, earning this very benefit. We are once again seeing the impact of a growing civilian-military divide in this country. It is national disgrace that some Members of Congress are willing to use veterans benefits as a piggy bank to pay for other programs. Congress must defend the promise made to our veterans. IAVA’s members — some still in harm’s way — kept their promise to our country; Congress needs to keep theirs to our vets.”


IAVA was joined at the press conference by veteran and military service organizations representing a diverse cross section of community of those who have served, including Vietnam Veterans of America (VVA), Air Force Sergeants Association (AFSA), Association of the United States Navy (AUSN) and Commissioned Officers Association (COA).


“Vietnam Veterans of America has long held that government should never pay for a program for one group of veterans by cutting funding and taking away from any other group of veterans.  Robbing Peter to pay Paul, no matter how important or vital Paul might be, goes against one of VVA’s core principles,” said Rick Weidman, VVA Executive Director for Policy and Government Affairs.


“Officers in the U.S. Public Health Service fought hard to be allowed to transfer GI Bill benefits to their dependents. Because these officers have one or more college degrees when they join the USPHS, they don’t tend to use the bill’s provisions for themselves as much as do members of other services. Transferability means everything to them, and this proposed legislation would take some of that benefit from them,” said Col. (ret.) James T. Currie, Executive Director for Commissioned Officers Association of the U.S. Public Health Service.


IAVA led the passage of the Post-9/11 GI Bill in 2008 and in championing upgrades in 2010 and 2014. These upgrades simplified and improved tuition benefits, expanded eligibility to the National Guard, included vocational programs, and made nationwide in-state tuition rates a possibility for new veterans beginning this year.


The Post-9/11 GI Bill has been used by nearly one million veterans and their family members to accomplish educational goals and chart new career paths.


Note to media: Email press@iava.org or call 212-982-9699 to speak with IAVA CEO and Founder Paul Rieckhoff or IAVA leadership.
Iraq and Afghanistan Veterans of America (www.IAVA.org) is the leading post-9/11 veteran empowerment organization (VEO) with the most diverse and rapidly growing membership in America. As a non-profit founded in 2004, IAVA’s mission is to connect, unite and empower post-9/11 veterans. Celebrating its 11th year anniversary, IAVA has connected more than 1.2 million veterans with resources and community, and provided more than 5,800 veterans with personalized support from IAVA’s Master’s level social workers.