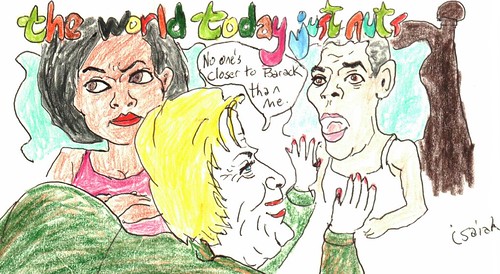 Hillary's the 'winner' in Iowa.

Me, I go with Cynthia McKinney:


Tuesday, February 2, 2016.  Chaos and violence continue, the chickens come home to roost for a left that failed to speak out against the continued war on Iraq, John Kerry is officially a failure and being iced out by the administration, and much more.


Today, the US Dept of Defense announced:


Strikes in Iraq
Attack, fighter, and remotely piloted aircraft conducted 20 strikes in Iraq, coordinated with and in support of Iraq’s government:

-- Near Albu Hayat, a strike struck an ISIL tactical unit and destroyed an ISIL staging area.

-- Near Mosul, four strikes struck an ISIL tactical unit and an ISIL checkpoint and destroyed an ISIL bomb-making cache.

-- Near Sinjar, a strike struck an ISIL tactical unit.


Task force officials define a strike as one or more kinetic events that occur in roughly the same geographic location to produce a single, sometimes cumulative, effect. Therefore, officials explained, a single aircraft delivering a single weapon against a lone ISIL vehicle is a strike, but so is multiple aircraft delivering dozens of weapons against buildings, vehicles and weapon systems in a compound, for example, having the cumulative effect of making those targets harder or impossible for ISIL to use. Accordingly, officials said, they do not report the number or type of aircraft employed in a strike, the number of munitions dropped in each strike, or the number of individual munition impact points against a target.

The above is a failed tactic.

It is not a strategy.

Because he's an idiot.

He's not just any idiot at Georgetown, he's an idiot who shows where whoring leads.

In a column, he insists that US President Barack Obama has a strategy.

The fool can speak like this -- and it gets worse -- because whoring has allowed it.

In the early years of the never-ending Iraq War, students on campuses overwhelmingly opposed the Iraq War and demanded US troops leave Iraq.

After nearly eight years of Barack in the White House, and all the whoring that entails, there is a large -- not yet a majority -- number of students on college campuses today who are wallow in their stupidity and revel in their sense of entitlement.

Gregory, for example, dictates that Iraq will not split up.

Because he will impose on Iraq what he wants.

Let's be honest for a moment.

Iraq is a false creation by outside forces.

It has never hung together peacefully as a country.

In instances like this, at one point or another, the 'country' splits up.

That will likely take place with Iraq.

If Iraq is stay together this year or any other?

It's going to be the decision of the Iraqi people.

We have repeatedly said here that only they can make the decision to split up or to stay together.

It cannot be imposed upon from the outside.

That's what self-will and democracy are all about.

But Matthew Gregory's been lied to for so long he doesn't grasp that.

He's Samantha Power all over again.

The Cruise Missile Left, as they've been called.

He's been failed by his own sense of entitlement and by the silence on the left since Barack was elected.

The refusal to demand an end to the Iraq War.

The refusal to call a liar a "liar."  And Barack is a liar.

"No boots on the ground."  That lie just gets bigger and bigger as he continues the Iraq War.

As Jason Ditz (ANTIWAR.COM) points out, "The US has repeatedly added boots on the ground to the war, and has some 3,700 ground troops in Iraq now, with Pentagon officials pushing a proposal to get that up to 4,500."

During the age of Bully Boy Bush, a liar could be called a liar.

In the age of Barack, we're all supposed to politely bite our tongues.

At his most laughable, Gregory types, "The first step would entail convincing key regional players to pursue the requisite policies to achieve the designated goal. The Iraqi government would be an enthusiastic partner but would need to demonstrate its inclusiveness and ability to unite the country’s diverse ethnicities and religious sects."

I guess that's one way to put it.

Not accurate but who needs accuracy when, like Gregory, you're arguing for more war.

In addition to the abuses against non-Sunni minorities in Mosul by Islamic State, the Sunni residents who make up the city told local reporters and human rights organizations in 2014 that Iraqi security forces executed prisoners before withdrawing. Human Rights Watch relayed stories of more than a dozen men executed after being removed from the Counterterrorism and Organized Crime prison.
This sense of persecution at the hands of Nuri al-Maliki’s Shia-led government prompted many to support ISIS when it arrived.

And the abuses continue under Prime Minister Haider al-Abadi's rule.

Members of Shia militias, who the Iraqi government has included among its state forces, abducted and killed scores of Sunni residents in a central Iraq town and demolished Sunni homes, stores, and mosques following January 11, 2016 bombings claimed by the extremist group Islamic State, also known as ISIS. None of those responsible have been brought to justice.
Two consecutive bombings at a café in the town of Muqdadiya, in Diyala province, some 130 kilometers north of Baghdad, on January 11, killed at least 26 people, many of them Sunnis, according to a teacher who lives near the café. ISIS claimed the attacks, saying it had targeted local Shia militias, collectively known as Popular Mobilization Forces, which are formally under the command of the prime minister. Members of two of the dominant militias in Muqdadiya, the Badr Brigades and the League of Righteous forces, responded by attacking Sunnis as well as their homes and mosques, killing at least a dozen people and perhaps many more, according to local residents.

“Again civilians are paying the price for Iraq’s failure to rein in the out-of-control militias,” said Joe Stork, deputy Middle East director at Human Rights Watch. “Countries that support Iraqi security forces and the Popular Mobilization Forces should insist that Baghdad bring an end to this deadly abuse.”

Can you grasp that?

If you can, grasp this:  It is illegal for the US government to support a regime or government that attacks its own people.  It is against domestic US law and it is against international law.

Maybe because he wants to be, maybe because he's lazy (and would rather just continue the same instead of transform it into something different), who knows why he is how he is?

But a War Crime is taking place and he is the War Criminal.


Ready for some more truths?

The US government has failed in Iraq yet again.

Barack thought that could be avoided -- at least until after he left the White House.

How was that going to happen?

Did you miss what he had John Kerry doing?

In June of 2014, Barack publicly stated a political solution was needed in Iraq.  That was the only answer, he insisted.

Instead of having the US State Dept work on that, he treated them as a junior branch of the Defense Dept.

He didn't task them with diplomacy.

He had them traveling to this and that country trying to get them to commit to sending troops -- more troops in many cases -- into Iraq.

No wonder he's so bombastic.

He should have made  a great State Dept leader but instead he's an embarrassing failure.

And, yes, he knows this, Barack even thinks so.

More and more, John's being iced out.

Brett McGurk is the State official the White House is vested in.

John's just fighting to hold onto whatever turf he can keep.

He was in Rome today, blow-harding before a small group -- even State described it as a "small group" -- about the Islamic State.

But no one cares.

Even the press that covers the State Dept didn't care.

At today's US State Dept press briefing, no one asked one question about Kerry's meaningless 'big' meet-up in Rome.

Kerry has lost the confidence of the president.

That's the reality and even John Kerry knows it.

He and his small group of supporters are trying to spin Australia's former Defence Minister's disagreement with the country's Prime Minister as proof of some success on Kerry's part.  It's no such thing.  It's not even a sitting Defence Minister but, even if it was, the prime minister has made the decision not to send more Australian troops into Iraq.


The failure is all around.

Which is why, even by UN figures, January was another devastating month for Iraq.

UNAMI issued the following on Monday:

Baghdad, 1 February 2016 – A total of 849 Iraqis were killed and another 1,450 were injured in acts of terrorism, violence and armed conflict in Iraq in January 2016*, according to casualty figures released today by the United Nations Assistance Mission for Iraq (UNAMI).

The number of civilians killed in January was 490 (including 24 federal police, Sahwa civil defence, Personal Security Details, facilities protection police, fire department), and the number of civilians injured was 1,157 (including 47 federal police, Sahwa civil defence, Personal Security Details, facilities protection police, fire department).
A total of 359 members of the Iraqi Security Forces (including Peshmerga, SWAT and militias fighting alongside the Iraqi Army but excluding Anbar Operations) were killed and 293 were injured.
The Special Representative of the United Nations Secretary-General for Iraq (SRSG), Mr. Ján Kubiš, deplored the continuing high casualty toll, particularly a sharp increase in the number of injuries among civilians in January as compared to the previous month.
“One casualty is one too many. The suffering of the Iraqi people must end,” the SRSG said. “Iraqis, civilians in particular, continue to pay the price in this conflict. The Iraqi people should have the opportunity to live in peace and security.”
The figures showed that Baghdad Governorate was the worst affected, with 1,084 civilian casualties (299 killed, 785 injured), Diyala 61 killed and 79 injured, Ninewa 55 killed and 24 injured, while Kirkuk had 12 killed and 3 injured, and Salahadin 2 killed and 14 injured.
According to information obtained by UNAMI from the Health Directorate in Anbar, in January 2016 the Governorate suffered a total of 304 civilian casualties (56 killed and 248 injured). Anbar casualty figures cover the period from 1-30 January, inclusive.
*CAVEATS: In general, UNAMI has been hindered in effectively verifying casualties in conflict areas. Figures for casualties from Anbar Governorate are provided by the Health Directorate. Casualty figures obtained from the Anbar Health Directorate might not fully reflect the real number of casualties in those areas due to the increased volatility of the situation on the ground and the disruption of services. In some cases, UNAMI could only partially verify certain incidents. UNAMI has also received, without being able to verify, reports of large numbers of casualties along with unknown numbers of persons who have died from secondary effects of violence after having fled their homes due to exposure to the elements, lack of water, food, medicines and health care. For these reasons, the figures reported have to be considered as the absolute minimum.