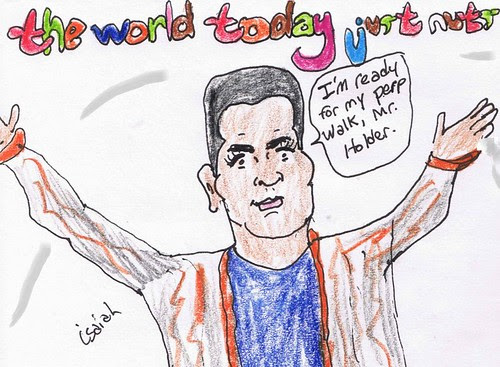 Call me a fool, but I have hopes for next week.  It seems like it has to be good.

So at the end, Charlie's rescued her brother.  Miles is saving their mother (Rachel) when he gets cornered and tells her go.  Then he manages to get away.

So the group is the computer guy, Nora (fighter and resistance), Charlie, Danny (Charlie's brother), Rachel and Miles and they're moving towards the woods when they hear a noise.

The militia has gotten a helicopter in the air.

Is it running on gas or electricity.  Until we know that, we don't know if it's a threat.

If it's electricity, it looked like Rachel was calaculating how far it could go (off the pendant and the amplifier that Rachel built after the militia got a pendant).  If it's electric, it'll probably crash and they'll be fine.

It's armed so it could chase them a bit.

Here's one way that the show is sucky.

Like Danny, who found out episodes ago his mother was alive, Charlie and Miles learn this.  They learn it this episode.  They thought Rachel was dead.  For years, they've thought that.

I'm sorry, if my mother were dead and then I found out she were alive, this would be major.

I would've thought Nate would move heaven and earth to see Charlie.  (And Nate's father ensured he wasn't going to California so where was Nate?)

(If I tell you that Miles held a sword to Nate's mom's throat to blackmail Nate's dad to go get Nora and what's his name (Arthur?)?

I have no idea.  But there were yet again a lot of holes in the plot and pretty generous of them to give us such a slow episode so we could notice all the holes.

In addition, Alsumaria notes that a Mosul roadside bombing has left two people injured and they update that to note 2 Iraqi soldiers and 1 civilian are dead from the bombing and eleven people are injured.  That's important to note because these are early numbers and the tolls (death toll and wounded toll) in today's violence may rise.   All Iraq News notes that a Ramadi car bombing has left 1 dead and fifteen injured.  Alsumaria adds that a Baquba roadside bombing has left two police officers injured.  All Iraq News notes multiple bombs in Tuz Khurmatu while AFP elaborates, "Also on Tuesday, six roadside bombs targeted Iraqi army and police in the disputed town of Tuz Khurmatu, wounding two members of the security forces, police Lieutenant Colonel Khalid Al Bayati said."   And Alsumaria notes a Salahuddin Province bombing (south of Tikrit) has left one person injured.

Today's violence will distract from the many reports yesterday that the conflict between the Baghdad-based central government of Iraq and the semi-autonomous Kurdistan Regional Government (three provinces in nothern Iraq that have been liberated/semi-autonomous since the first Gulf War).  Harriet Fildes (Eurasia Review) explains:
The recent increase of Iraqi troops in resource-rich contested areas is fuelling fears that the subsequent escalation of tension could develop into full-scale war between the Shiite Iraqi government and the area known as Iraqi Kurdistan.
Iraqi encroachment on the city of Kirkuk is one of the reasons for the recent escalation as the Kurdistan Regional Government has issued a number of statements compelling Iraq to back away from this area, threatening war should it continue with its current aggressive policy.
Alsumaria reports that today a delegation representing the Peshmerga (Kurdish elite forces) met at the Ministry of Defense in Baghdad with officials from that Ministry to continue talks in an attempt to work towards ending the current standoff.  For the same reasons, All Iraq News notes, Speaker of Parliament Osama al-Nujaifi met with the United Nations's Gyorgy Busztin.  In a statement after the meeting, al-Nujaifi noted that they discussed his recent meetings (last week) with Iraqi Prime Minister Nouri al-Maliki and KRG President Massoud Barzani and that they also discussed torture in Iraqi prisons.
Women are said to be primary targets of torture in Iraqi prisons.   All Iraq News reports that a workshop combatting sexual violence that the British Embassy co-sponsored yesterday, British Ambasssador to Iraq Simon Cowles quoted Nouri's own words about the violence targeting Iraqi women and Cowles went on to declare that words have to be put into practice.  The Iraq Times notes the increasingly louder outrage over the Iraqi security forces illegally arresting Iraqi women and torturing them in Nouri's prisons and detention centers.  The paper adds that Iraqiya MP Hamid al-Mutlaq has called out Iraqi President Jalal Talabani, Prime Minister Nouri al-Maliki and Speaker of Parliament Osama al-Nujaifi saying they have failed the female prisoners who are being raped and tortured.  On this issue, from yesterday's snapshot:

Still on the Iraqi Parliament, Saturday All Iraq News reported that the Women, Family and Children's Committee is calling for the Ministry of Justice to make prisons and detention centers open to legislative committees so they can see what the conditions are.  In addition, All Iraq News noted MP Safia al-Suhail is calling on the Ministry of Women to focus on eliminating violence against women in prison.  Today Alsumaria reports that Iraqiya MP Hamid al-Mutlaq accused security forces of raping and torturing women prison and he traces the culture back to the torture of Iraqis by Americans at Abu Ghraib prison.  On Sautrday, the article notes, Iraqiya MP Ahmed al-Alwani discussed the large number of women who have been raped in Iraqi prisons and are in fear of further assaults.


The same Iraq Times article notes a journalist who has been imprisoned since February.  That journalist is noted in a release from the Journalistic Freedom Observatory that Global Research has translated:


On 25 November 2012 The Iraqi News Network published an urgent statement of the Iraqi NGO Journalism Freedoms Observatory(JFO). This Journalist Advocacy group asks Prime Minister Nouri Al-Maliki to immediately interfere and investigate the circumstances behind the arrest of Sabah Hasan,a journalist arrested on 20 February 2012, almost ten months ago. She used to live and work in Baghdad, but she was transferred to the notorious Tasfirat prison in Tikrit, that witnessed at the end of September the largest prison break in recent history, when over 100 inmates allegedly escaped.
She was brutally tortured in the Major Crimes Directorate, which is located in one of Saddam's palaces. JFO demands that the officers who tortured her should be submitted to interrogations. Some of them are already in jail because of the escape of some prisoners a few weeks ago.Sabah Hasan was accused of crimes she didn't commit. JFO states that the victim's daughter, Shatha Salah, used to work since the last four years with her mother as a photographer for the Free Opinion Newspaper that is issued and distributed in Baghdad and other governorates. Shatha assured that she has medical reports confirming the terrible torture her mother has been facing for months.
They have beaten her mother, burned her with cigarettes all over her body,taking off all her clothes and wrapping her in a blanket to be transferred to Tikrit Prison while everyone was watching. Her daughter added that the injuries covered 85% of her mother's body. Shatha said that Tikrit Operations Leader Kareem Al-Khazraji assisted her to take her mother to Baghdad after they were sure that she didn't commit any crime. Now she is at the headquarters of the Fifth Brigade of the Iraqi Army in Al-Sayidiyah District.
Sabah was arrested last February while she was trying to bring back a car for one of her relatives thatwas taken by the Traffic Office after a traffic violation. Sabah was shocked to find out she was wanted in Tikrit for having a role in the killing of the brother of Nahida Al-Daini, a member of the Iraqi Parliament. Later investigations proved that Sabah had nothing to do with that assassination, but then she was accused of other crimes without any evidence.
Sabah works in Baghdad as a Chief Editor for theFree Opinion Newspaperduring the past four years. She has six children and a handicapped husband. Her daughter told JFO that her mother now experiences terrible conditions in one of the detention centers related to the Ministry of Interior, because there are not enough cells for the female prisoners in Shaab Stadium Tasfirat Prison. This was confirmed by a source in the Ministry of Interior who stated that there are no places available for female prisoners in this detention, called Site 4. He also added that human rights organizations should raid this prison and immediately start an investigation to take serious actions against the brutal prison guards and the forces of the Ministry of Interior, which are under the command of Maliki.
Shatha is trying to contact some Parliament members and political personalities who could help with her mother's release, and bring to justice the persons who tortured her and caused terrible psychological and physical pain. JFOis making the same demands through the Legal Centre and a team of lawyers who will defend her do their best to get her released,and bring the criminals to the court.

I have to thank you for the efforts you've put in writing this blog
http://www.kuwait.prokr.net/
http://www.emirates.prokr.net/