Happy Fourth.  Hope everyone had a great day.   I had everybody over at my house.  That wasn't planned.  My great-grandmother was staying over with me (still is) and that was planned.  This morning, as we were having breakfast, she said, "Marcia bear" (her pet name for me), "I don't think I can take getting out in the heat."  And she shouldn't have to.  Not at her age.  So I called my folks and my mom said she'd pack up the kitchen (she'd made potato salad and all the staples) while my dad said he'd use my grill (which didn't make him happy but he did) and we called everybody and said it was over here.  I set up board games in one room and had the TV in the living room going for whatever anyone wanted to watch while I had the TV in my bedroom set up for the kids.  A lot of us gathered in the backyard but some, like my great grandmother, just stayed in doors.  And that was fine.  She won big in Scrabble and did okay in Monopoly.  In fact, my great-grandmother is such a great Scrabble player that usually you can only get guests to play her.  Everyone else knows she'll kick our asses. :D 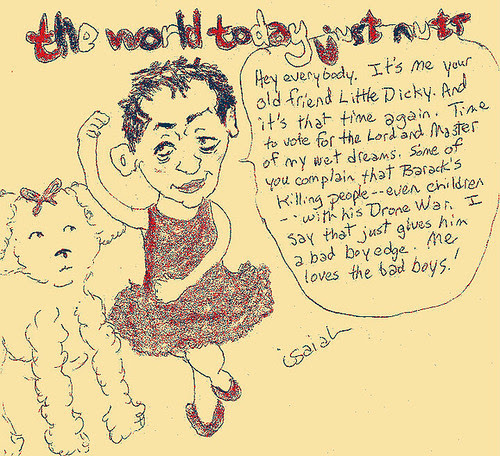 So there were 7 entries up at The Common Ills today.  I enjoyed all.  Yea for Jill Stein!  And I hope you read Kat's review.  She's covering one album by Carole King and two by Maria McKee.  You could argue she's covering two albums by Carole King since she's opening with two paragraphs about Carole's Christmas album.

After everyone was gone except my parents, an uncle and my great-grandma, she wanted to watch something and I showed her how to flip through Netflix so she could pick something.

Guess what she picked?  Mayan Prophecy and the Shift of the Ages.  The film's website says: "The Shift of the Ages film is a true an authentic story of the Maya, the Mayan Calendar, 2012 and the turbulent times in which we are living.  Compelling and timely, this story is told through living Grand Elder, Wandering Wolf, also known as Don Alejandro Cirilo Perez Oxlaj."  From Wikipedia:


The Maya calendar is a system of calendars used in pre-Columbian Mesoamerica, and in many modern communities in highland Guatemala[1] and in Veracruz, Oaxaca and Chiapas, Mexico.[2]
The essentials of the Maya calendar are based upon a system which had been in common use throughout the region, dating back to at least the 5th century BCE. It shares many aspects with calendars employed by other earlier Mesoamerican civilizations, such as the Zapotec and Olmec, and contemporary or later ones such as the Mixtec and Aztec calendars. Although theMesoamerican calendar did not originate with the Maya, their subsequent extensions and refinements of it were the most sophisticated. Along with those of the Aztecs, the Maya calendars are the best-documented and most completely understood.
By the Maya mythological tradition, as documented in Colonial Yucatec accounts and reconstructed from Late Classic and Postclassic inscriptions, the deity Itzamna is frequently credited with bringing the knowledge of the calendar system to the ancestral Maya, along with writing in general and other foundational aspects of Maya culture.[3]

The 2012 phenomenon comprises a range of eschatological beliefs according to which cataclysmic or transformative events will occur on 21 December 2012.[1][2][3][4] This date is regarded as the end-date of a 5,125-year-long cycle in the Mesoamerican Long Count calendar. Various astronomical alignments and numerological formulae have been proposed as pertaining to this date, though none have been accepted by mainstream scholarship.
A New Age interpretation of this transition is that this date marks the start of time in which Earth and its inhabitants may undergo a positive physical or spiritual transformation, and that 2012 may mark the beginning of a new era.[5] Others suggest that the 2012 date marks the end of the world or a similar catastrophe.[6] Scenarios suggested for the end of the world include the arrival of the nextsolar maximum, or Earth's collision with an object such as a black hole, a passing asteroid, or a planet called "Nibiru".
Scholars from various disciplines have dismissed the idea of such cataclysmic events occurring in 2012. Professional Mayanist scholars state that predictions of impending doom are not found in any of the extant classic Maya accounts, and that the idea that the Long Count calendar "ends" in 2012 misrepresents Maya history and culture.[3][7][8] Astronomers and other scientists have rejected the proposals as pseudoscience, stating that they conflict with simple astronomical observations[9] and amount to "a distraction from more important science concerns, such as global warming and loss of biological diversity".[10]


So I loved it.  It also had me thinking about the dust and the "young sun" that a university in California has discovered.  And about Matthew Chalmers' article for Nature:


Physicists in Europe will present evidence of an entirely new particle on Wednesday, Nature has learned. But more data will be needed to officially confirm whether it is indeed the long-awaited Higgs boson — the particle thought to be behind the mass of all the others.
Even as rumours fly in the popular media, physicists have begun quietly cheering at CERN, the European particle-physics lab near Geneva in Switzerland. “Without a doubt, we have a discovery,” says one member of the team working on the ATLAS experiment, who wished to remain anonymous. “It is pure elation!”
For nearly half a century, physicists have predicted the existence of a particle that helps to endow others with mass. Named after theoretical physicist Peter Higgs, the boson is the upshot of a mathematical trick that unites the electromagnetic and weak nuclear forces into a single ‘electroweak’ interaction. It is considered the final, crucial piece of the standard model of particle physics.


So that's a great deal to ponder. Maybe it's connected, maybe it's not.  I hope you had a great 4th.