La Brea. The winter finale was last week -- I think. I watched the last two episodes on Sunday. I needed a beak after the Gavin is Isaiah news. That's still freaky. Eve fell in love with and married Gavin in our time but when she goes back to the wooly mammoth age, she meets Isaiah who is really Gavin. I mean, that's beyond Roman Polanski kind of gross.

So what happened in the last 2 episodes. There was another way to return -- but to the 80s -- 30 years before they dropped out of California. Isaiah went. Who didn't? It looked like Lily, Eve's son and the doctor's daughter didn't -- though only Lily was supposed to go of the three.

She didn't make it up the mountain fast enough. See this gateway, you didn't have to fly through. You could reach it by climbing to the top of the mountain. But Lily arrived late and was depressed for 30 seconds or so. That's how long it took for a green glow to appear, circle around her and the other two and snatch all three into nothingness as Eve and Levi watched.

I don't get that. They really do not have enough interesting characters. I don't think they should have killed off Mary Beth.

She got injured. Stepping up to defend Isaiah from Silas and his henchman. She got stabbed. She went on to the mountains with Eve and company saying this wasn't her first time being stabbed. But the doctor said she might have internal bleeding which is how we all knew how it was going to end. She only was there because of her son Lucas. He said he'd go through the portal. If he was going, she was going.

Lucas was not a good son. Or a nice one. But, to his credit, when Mary Beth got injured he was there for her -- before he knew she was dying. And when she started dying, he was there as well.

I like Lucas -- which probably means he'll be the next character killed off.

To reach the mountain, Lily had to leave the young woman who pretended to be her sister. She helped Lily up the mountain and got caught in a trap that had been set. Lily wasn't able to free her and she told Lily to leave her. This woman, by the way, was the only one who believed the stoner when he saw a cow. Cows are brought over by the Europeans so this was big news that a cow was there. But everyone thought, "He's stoned.'" He wasn't. With her help, he brought the cow back to the camp.

Remember the woman on the plane with Gavin who just leapt out? She's now in the tar pits. She told Eve and the rest about the portal at the top of the mountain. While they headed that way, she got stoner to help her in a different direction where she took him to . . . NASA? That's what it looked like. Right there in prehistoric times, one of those white towers shooting straight up to the sky. She put it there.

Apparently, she has been going in and out over the years -- she told everyone that time doesn't move from point a to point b forward but instead in circles. Turns out Silas is from our time too. We have no idea what's going on but these sink holes haven't 'just been' happening. There seems to be something more going on -- a lot more.

Monday, December 6, 2021.  The western press ignored Sulaymaniyah and that says a great deal about the western press.
Sulaymaniyah?  It's a city in Iraq.  In 1968, the University of Sulaymaniyah was established and it's the largest.  It has many satellites but its main campus is the largest college in the Kurdistan Region.  The second largest museum in Iraq is in Sulaymaniyah (the Baghdad's Iraq Museum is the largest museume in the country). The city has produced poets, linguists, historians, novelists, a prime minister (Ahmad Mukhtar Baban who was prime minister of Iraq in 1958) and a president of Iraq (Jalal Talabani).
TRAVEL WITH PEDRO notes:
By Iraqi standards, Sulaymaniyah is a very young city. It was founded in 1784 by Ibrahim Pasha Baban, a Kurdish prince to be the capital of his principality. Since then it has been Iraqi Kurdistan’s cultural capital and home to philosophers, poets and writers. Its importance is not limited to Iraq, but for the whole of the Kurdistan region, which also encompasses parts of Turkey, Syria and Iran.
Slemani, as it is also known, attracted many Sorani-speaking Kurdish linguists and writers, and here Sorani literature was developed. These writers and poets are today revered with statues and busts in many parks and squares around the city.
The local population are known for being more open-minded and tolerant than in the rest of Kurdistan, and this is something I could perceive in the few days I spent in the area. Something that surprised me in Kurdistan, especially in Slemani, is that women seem to be more independent. In the Arab world women tend to seem quieter, overshadowed by their male relatives when in public, and never start a conversation with a stranger. Here,  for the first time ever, I had local females starting a conversation with me on the street and in restaurants.
The city is described on the Lonely Planet guide as a “cosmopolitan gem” and “a place to be discovered”. It is quite nice, I totally agree, but to me those words are an overstatement. From a visitor’s perspective, while it still has many places of interest,  I found the city short of landmarks. The heart of the city is the old town, which despite the name, looks rather modern and it is deliciously chaotic as any medina in Morocco, for inistance. The old town is dominated by a large open bazaar, which occupies several blocks. It is a market place selling mainly food, vegetables and clothes, and is buzzing from early morning to late afternoon. Right in the middle of all this is the Grand Mosque, which is open for visitors. In the area I found many small family run restaurants serving simple, tasty and inexpensive food.
Western press, meet Sulaymaniyah.
An introduction appears necessary since they so often ignore the area.  Inclduing right now.  It was bad enough yesterday when the western press ignored a variety of actions taking place in the region ("Western press ignores protests, actions and murder i Sulaymaniyah").  But it's now Monday and they appear determined to pretend there's still no news value to what's taking place in Sulaymaniyah.
For example, the protests that started yesterday.

Those protests are being ignored -- again -- by the western press.

The protests continue this morning.  And so does violence against the protesters.  AL AHMAD TV reports today:

In The Video.. Student demonstrators were run over in Sulaymaniyah. #Iraq
7:09 AM · Dec 6, 2021
What else is getting ignored in that area?   A24 reported Sunday:

To mark the 16 Days of Activism against Gender-Based Violence, the Civil Development Organization in Sulaymaniyah launched an event to raise awareness on violence against women. The event featured women dummies lined up in the garden, who represented victims of violence. Visitors can hear their sorrowful stories through microphones attached to those dummies. According to the latest statistics, the number of victims of violence has surged despite deterrent laws. In the last 8 months, 10 women lost their lives in an honor killing.

Why was The #MeToo movement necessary in the US?  Because women's rights are given lip service from time to time but not truly honored or recognized.  And that is reflected in what US news outlets choose to cover when they cover foreign countries.  Certainly, THE NEW YORK TIMES' go-go boys in the Green Zone, while getting really close with Iraqi women (prostitutes) elected to ignore the women of Iraq in print.  To read those early year reports is to think that Iraq had no women in the whole country.  THanks for all your 'ehlp John F. Burns and Dexy.  Will you ever attone for what you did?  Your wrok really does qualify as a journalistic crime.

And those crimes continue to this day.  The pattern set by the 'golden boys' continues.  So when Iraqi women fight for their rights, the western press looks the other way.  Over and over.  It's really past time that women with spaces -- coumnists like you, Michelle Goldberg -- started using your space to point out how your own outlets disappear women from the coverage.

Women in Southern Kurdistan are subjected to domestic violence. They are subjected to physical, psychological, verbal, and economic violence by their fathers, husbands, brothers, and sons. Many women set themselves on fire to get rid of violence. Neşmik Resul, a psychologist working at a hospital in Sulaymaniyah spoke to our agency about what causes women to set themselves on fire.

Mentioning that women are afraid of telling violence against them, Neşmil Resul said, “Women don’t report violence faced by them because they are afraid. Female survivors are subjected to more violence by their husbands. Women have no right to make their decision.

“I am ready to provide psychological support to women”

They certainly missed a death in the region yesterday.  Khanzad Organization notes:

With great sadness and sorrow, (Captain / Muhammad Latif), the officer at Directorate of Combating Violence against Women and the Family, was martyred last night while performing his official duties in the city of Sulaymaniyah. * 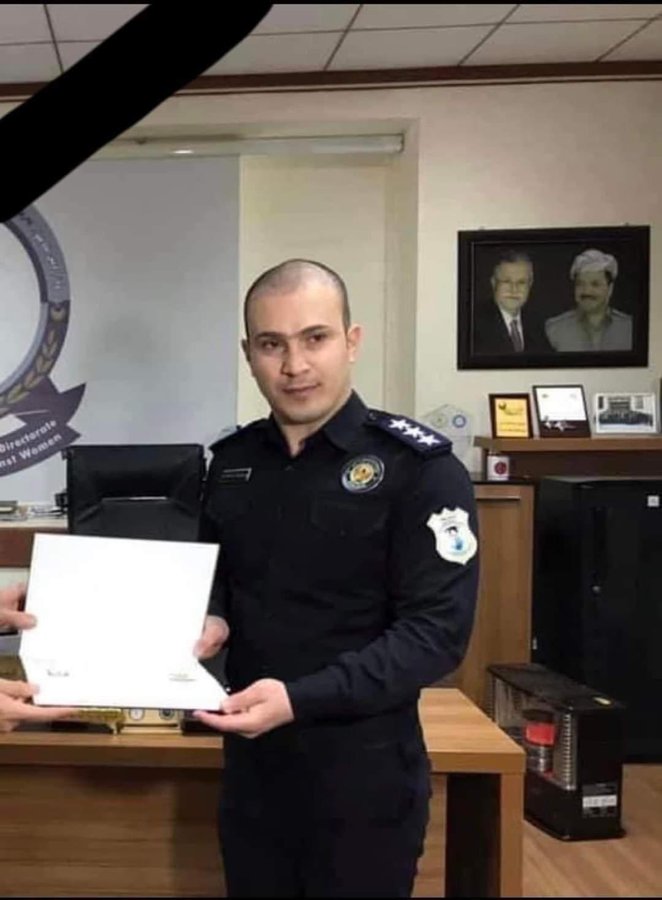 *We, as the Khanzad Cultural and Social Organization, extend our condolences to the family of the martyr and his colleagues, hoping that similar incidents will not occur while facing the files of violence anymore.
10:41 AM · Dec 5, 2021

The participation of Khanzad Cultural and Social Organization in announcing the statement of civil society organizations regarding the martyrdom of "Captain / Muhammad Latif", an officer in the Directorate of Combating Violence against Women and the Family in Sulaymaniyah,* 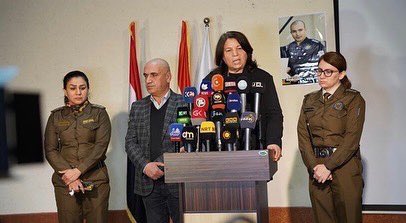 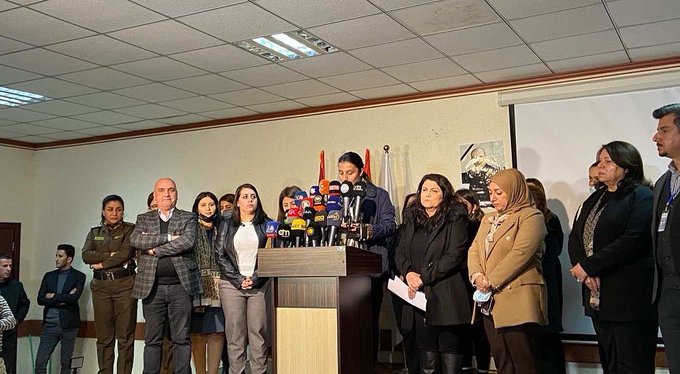 * and the injury of 3 other officers of the Directorate while carrying out their official duties. Civil society organizations submitted a memorandum of support to the Directorate of Combating Violence,
12:26 PM · Dec 5, 2021
RUDAW explains:

A police officer was killed by an armed suspect while responding to a domestic violence call late Saturday in Sulaimani according to officials. Several others were injured.

A person who was subject to a complaint clashed with police units from Sulaimani’s Directorate of Combatting Violence Against Women who were in the process of arresting him, the directorate’s media head Jamal Rasul told Rudaw following the accident.

Police officer Mohammed Latif was killed and three others were injured, he added. The alleged suspect also set the police car on fire, Rasul noted.