Jimmy Dore is on fire 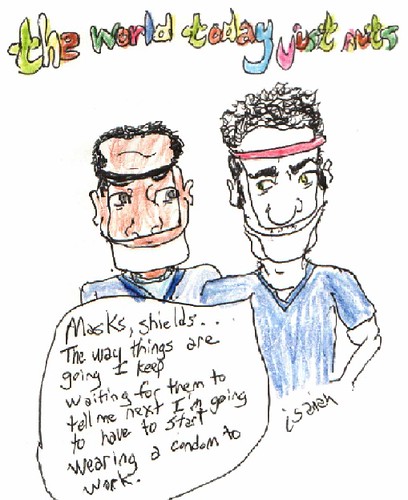 I'm tired tonight and want to get some sleep, sorry.  :(

We've been doing roundtables and pieces on the Supreme Court nomination hearings for the gina & krista round-robin.  It's daily while the confirmation is going on.

And I'm just really tired.  My girlfriend ordered Chinese and I love Chinese but I'm so tired I couldn't even finish it.  And it was my favorite: Sweet and sour chicken.

So let me note Jimmy Dore and go to bed.

Wednesday, October 14, 2020.  The media's fluffing of Joe Biden gets some media attention, militias remain an issue in Iraq, and much more.

This morning at THE NEW YORK POST, Emma-Jo MOrris and Gabrielle Fonrouge report:

Hunter Biden introduced his father, then-Vice President Joe Biden, to a top executive at a Ukrainian energy firm less than a year before the elder Biden pressured government officials in Ukraine into firing a prosecutor who was investigating the company, according to e-mails obtained by The Post.

The never-before-revealed meeting is mentioned in a message of appreciation that Vadym Pozharskyi, an adviser to the board of Burisma, allegedly sent Hunter Biden on April 17, 2015, about a year after Hunter joined the Burisma board at a reported salary of up to $50,000 a month.

“Dear Hunter, thank you for inviting me to DC and giving an opportunity to meet your father and spent [sic] some time together. It’s realty [sic] an honor and pleasure,” the e-mail reads.

An earlier e-mail from May 2014 also shows Pozharskyi, reportedly Burisma’s No. 3 exec, asking Hunter for “advice on how you could use your influence” on the company’s behalf.

The blockbuster correspondence — which flies in the face of Joe Biden’s claim that he’s “never spoken to my son about his overseas business dealings” — is contained in a massive trove of data recovered from a laptop computer.

The computer was dropped off at a repair shop in Biden’s home state of Delaware in April 2019, according to the store’s owner.

Other material extracted from the computer includes a raunchy, 12-minute video that appears to show Hunter, who’s admitted struggling with addiction problems, smoking crack while engaged in a sex act with an unidentified woman, as well as numerous other sexually explicit images.

Joe Biden repeatedly has denied knowing anything about son Hunter’s lucrative work on the board of Ukrainian energy company Burisma.

“Hunter Biden is a private citizen and a lawyer. The former vice president does not endorse any particular company and has no involvement with this company,” a spokeswoman for Joe Biden said in a December 2015 statement to The New York Times.

Biden has stonewalled on the topic ever since.

“I’ve never discussed my business or their business, my sons’ or daughter’s. And I’ve never discussed them because they know where I have to do my job and that’s it, and they have to make their own judgments,” he told the “CBS Evening News” last October.

And yet, an e-mail obtained by The Post shows a senior Burisma executive thanking Hunter for the opportunity to meet Joe Biden just 12 months after Hunter joined the Burisma board at a reported salary of up to $50,000 a month.

The claims come as Mike Allen and Hans Nichols (AXIOS) observe the easy ride that Joe Biden has gotten from the press:

Since Aug. 31, Biden has answered less than half as many questions from the press as Trump — 365 compared with 753 — according to a tally by the Trump campaign, which the Biden campaign didn't dispute.

Biden has yet to be pinned down on an array of legitimate questions, including:

Click here to listen to the topic discussed in an AXIOS podcast.  Scott Jennings (LOUISVILLE COURIER JOURNAL) also  marvels over the lack of real media scrutiny of Joe, "Biden changes his stripes more than a chameleon in a Skittles factory. And he’s doing it again by claiming the mantle of unity in this election. Today’s Biden is a made-for-media candidacy untested by interactions with his base."  On court packing, Jonathan Turley points out, "A recent Rasmussen poll found that 55 percent of Americans opposed any court packing plan and only 27 percent was in favor of the idea."  John Kass (CHICAGO TRIBUNE) reminds:

Biden once thought court-packing would undermine the court’s independence and called it “boneheaded” years ago.

But he’s been dodging the court-packing issue on the campaign trail for weeks.

Just the other day, a reporter in Las Vegas pressed Biden, asking: “Don’t the voters deserve to know where you stand?”

Another day, another crazy way Joe Biden tries to get out of answering a simple question.

When asked by reporters on October 10 whether, if elected, he would seek to create additional Supreme Court seats, a radical plan known as "court packing," the former vice president replied that "[i]t's not constitutional what they're doing." This baffling response apparently refers to President Trump and Senate Republicans, who are working to confirm Judge Amy Coney Barrett to the Supreme Court.

This clip spread quickly, and it is easy to see why. Many Democrats have condemned Senate Majority Leader Mitch McConnell and Judiciary Committee Chairman Lindsey Graham's plan to confirm Judge Barrett before the election, using adjectives like "wrong," "hypocritical," "shameful" and "stupid." While these comments have no basis regarding a confirmation timeframe comparable to those of many justices who came before her, "unconstitutional" carries far more serious implications. Biden must explain what he meant by this allegation.

On this issue, Jonathan Turley Tweeted the following last week:

Joe Biden just declared “You'll know my opinion on court packing when the election is over.” So the Democratic presidential candidate is telling the voters that he will not tell them if he plans to destroy a core institution in our constitutional system...

...this is an idea put forward by the Democrats, including Biden's own running mate, and a major issue in this election. The test of principle is when it is neither popular nor convenient...

...this is why James Freeman Clarke said that "a politician thinks of the next election. A statesman, of the next generation." Which is Biden thinking about in refusing to tell the voters whether he will pack the Supreme Court?

Meanwhile, Speaker of the House Nancy Pelosi continues to embarrass herself and look out of touch to everyone.  She scolded Jake Tapper during an interview and everyone largely looked the other way.  So now, instead of answering questions, she thinks it's acceptable to act like an ass.  Well, maybe not act.  Here she is with Wolf Blitzer.

Jimmy Dore addresses Nancy's nonsense in the commentary below.

She can't answer the question.  She just distracts and scolds.  She has nothing to offer and has accomplished nothing in her time of leadership.  Her claim to represent her constituents is a joke.  I'm one of them.  We supported marriage equality long before Nancy finally came around.  She doesn't represent us.  We were opposed to the Iraq War before it started.  She promised in the 2006 elections to win the Iraq War if the American people gave the Democratic Party control of just one house of Congress.  We gave them control of both houses.  The Iraq War continues to this day.

The relationship between the controversial Shia cleric Muqtada al-Sadr and the activists supporting the popular protest movement in Iraq has moved towards increased tension, after Sadr attempted to put the brakes on the momentum of the popular demonstrations by placing a number of conditions on the street movement,  described as arbitrary.

Sadr had hesitated a lot before siding with the protest movement that began in October 2019. Activists said that the Sadrists, the moniker given to Sadr’s followers, did not join in the protests until they realised that they were overwhelming; so they jumped on the wagon of the protests for fear to see their place on the street disappear.

During the months-long series of demonstrations, the relationship between the protesters and the popular current affiliated with al-Sadr was erratic at best. The two parties converged repeatedly at some points but also diverted repeatedly at some others. This relationship, however, witnessed a clear turning point when the United States killed the commander of the Quds Force in the Iranian Revolutionary Guard, Qassem Soleimani, and the field commander of the Popular Mobilisation Forces, Abu Mahdi al-Muhandis in a raid near Baghdad airport in early 2020.

While the protesters welcomed the US action and saw in it an opportunity to reduce Tehran’s dominance of political, security and economic decisions in Iraq, Sadr and his followers sided with Iran and participated in a partisan demonstration demanding the condemnation of the United States, before the representatives of the Shia cleric in the Iraqi parliament participated in drafting a resolution compelling the government to remove US troops out of the country.

The protests continue.  Moqtada lost all standing long ago.  He turned on the protesters then retracted the turn, then spun around again.  After that?  He just became a sad joke.  He didn't want men and women protesting together.  He issued an order.  His order was ignored.  It was mocked.  Protesters -- men and women -- carried signs mocking him.

Moqtada has his cult.  But that's all he has right now.  He had a great deal of power; however, he lost it and became a joke.  He might regain it, he might not.  But no one's really listening to him.  Even his recent call to disband all militias got little attention from the press.

On the issue of the militias, MIDDLE EAST MONITOR notes:

Washington called on Iraqi factions to surrender their weapons to the government in Baghdad, following the Hezbollah Brigade’s announcement that it would suspend attacks on US forces in the country.

The US Department of State told Al Jazeera that America urged all armed parties in Iraq to act responsibly and surrender their weapons to the government, adding that the actions of “Iraqi militias” jeopardises the government’s attempts to attract international investment.

It added that the United States and its partners are focusing on helping Iraq face the ongoing economic crisis, security instability and the coronavirus pandemic.

Following successive missile attacks on the Green Zone, seat of US embassy’s headquarters, and military bases accommodating US and International Coalition troops, the US last month threatened to close its embassy, which many Iraqi observers considered as a prelude to launching air strikes on the factions.

We'll wind down with this from The Feminist Majority:

Join us for our virtual conference Fired Up Ready to Vote this Saturday!