Margaret Kimberley's got some Tweets that need to be amplified. 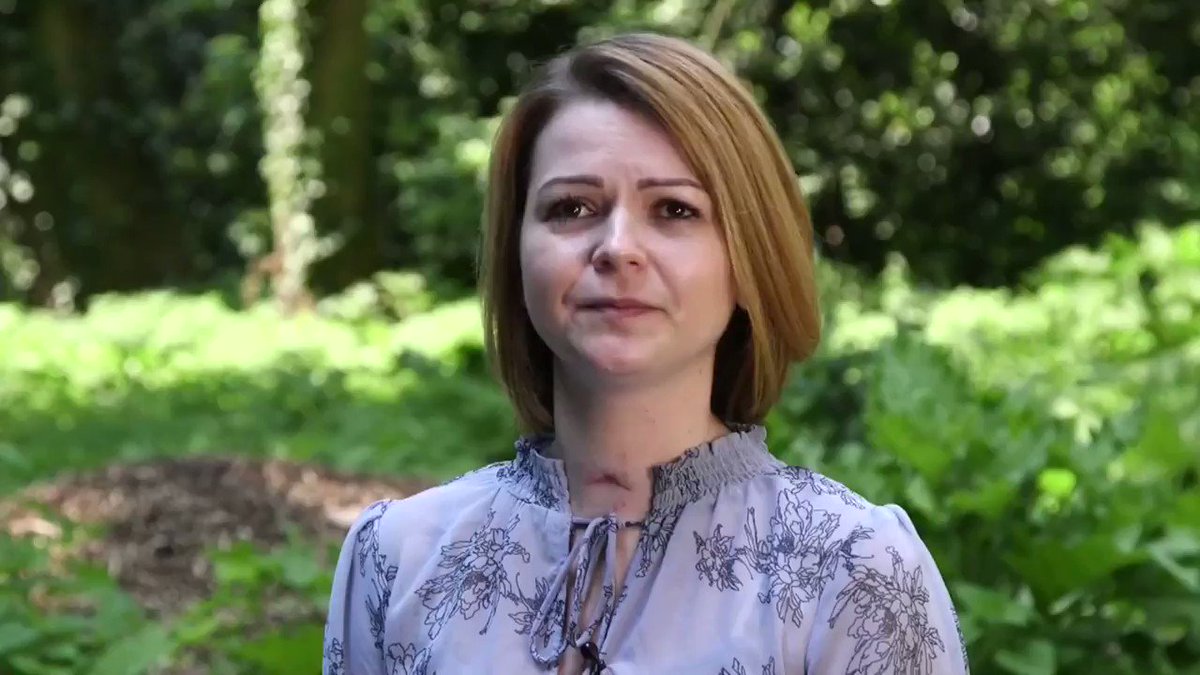 Charles Shoebridge‏ @ShoebridgeC 12h12 hours ago
Note in her ‘interview’ that Yulia #Skripal doesn’t answer any questions, and that @Reuters has now deleted from the original article its earlier reference to a scar on her neck (NB possibly from her hospital treatment), but which is still visible in photo https://twitter.com/shoebridgec/status/999334277023223809 … 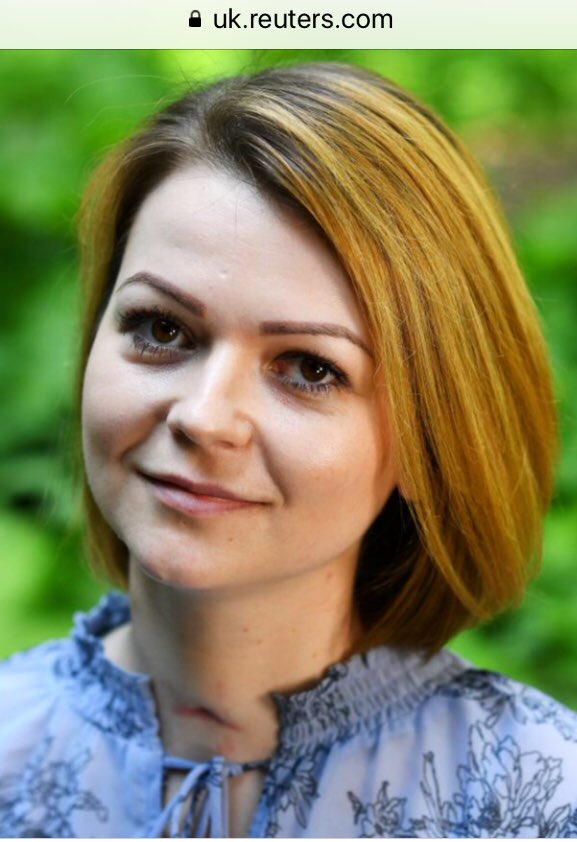 Margaret Kimberley‏ @freedomrideblog 11h11 hours ago
Imagine if a UK citizen were poisoned in Moscow and was then not allowed to return home and then had a staged announcement with Russian press. No one would believe a word she said. Yulia Skripal has been kidnapped.
1 reply6 retweets14 likes

Russian Embassy, UK‏Verified account @RussianEmbassy 11h11 hours ago
Glad to have seen Yulia Skripal alive and well. But the video shown only strengthens our concerns that she could be held against her own will and speaking under pressure. https://www.rusemb.org.uk/fnapr/6539 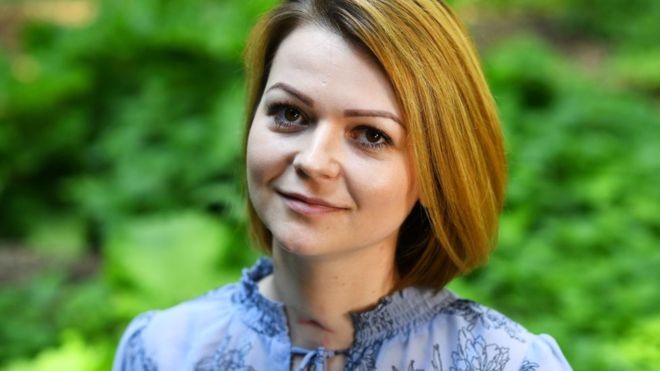 Margaret Kimberley‏ @freedomrideblog 3h3 hours ago
Margaret Kimberley Retweeted Bryan MacDonald
Yulia Skripal is being held against her will. #YuliaSkripal
Margaret Kimberley added,
Bryan MacDonaldVerified account @27khv
Hmm. Imagine if a poisoned British woman, who’s dad defected from Mi6 to the KGB years ago, was reading a prepared statement from a secret location under protection from the Russian state? And still said she wanted to go back to Britain. But Russia refused UK diplomats access? …
0 replies2 retweets3 likes

Can we get a MeToo! going to defend the people?  We really need one.

Josh Dunham‏ @ImJoshDunham 12h12 hours ago
Completely in awe of the work @rcallimachi does on her podcast, Caliphate. Equal parts chilling and eye opening. If you haven’t checked it out, you should.
1 reply0 retweets14 likes

Are you in awe, Joshy?  Well what a piece of trash you must be.

Dylan Gresik‏ @DylanGresik May 21
Continue to be fascinated by @nytimes @rcallimachi and her podcast. Certainly someone to emulate as an journalist.
1 reply0 retweets22 likes

Dylan, at your university, do they not teach that theft is wrong?


Just finished listening to the most recent episode of #Caliphate (#6). Any hope that I had that Abu Huzayfah might be lying is slowly disappearing...although I'm ready for a potential plot twist. Great reporting, riveting story. Just wish I could binge it! @rcallimachi
2 replies1 retweet5 likes


We can't expect JM Davis to worry about theft, she's too busy seeing a war as something she wishes she could "binge" on -- yes, she truly is that stupid.


We warned you.  And we mainly did so because antiwar Glenn Greenwald couldn't stop slobbering over her at his Twitter account.

Well Glenn-Glenn's moist mouth may have finally dried up.

Today his publication, THE INTERCEPT, is finally finding the issues others of us have already spent time on.


Her theft which is at the basis of her wowie podcast that trash like Tommy Vietor can't stop praising.


There is only one problem. She is accused of stealing those documents.
1 reply0 retweets0 likes

How about from the Iraqi government? 'Investigative journalism' just got a new definition. To Steal important documents of a terror organization without the permission of the "democratically" elected local government.
1 reply0 retweets0 likes

Except, "there is no record, Oral or written, of any Official permission from the Iraqi Army or defense ministry to give these documents away".
1 reply0 retweets0 likes

Ikram Ullah‏ @ullahi_
Replying to @ullahi_ @MikeOngstad @rcallimachi
Here is how your "investigative journalist" responds when she has no proof to defend her claim.


About a week after the piece was published, Farhan emailed Callimachi to ask if she got permission from Iraqi government officials to take the documents, and if she got consent from the people named in the files to publish their names. Farhan didn’t hear back, so she worked with two legal scholars to launch a petition calling on the Times to rethink its use of the documents. The removal of the documents violates international law, the petition authors wrote, calling for them to be returned to Iraq and warning that failure to do so would set a “dangerous precedent for the plundering of material and cultural heritage in conflict zones.” This wasn’t the only academic protest. In early May, Judith Tucker and Laurie Brand of the Middle East Studies Association published an open letter to top editors at the Times,  decrying the “myriad legal, professional, ethical, and moral issues” arising from Callimachi’s story.
[. . .]
In their letter to the Times, Tucker and Brand of the Middle East Studies Association said the Iraqi state alone had a right to the documents. “It is only legally designated representatives of the Iraqi state, and certainly not foreign journalists,” they wrote, “who should control the disposition of any documents found in circumstances like those in which Ms. Callimachi and her team operated, in accordance with Iraqi law and regulations governing public records.”
[. . .]
Tucker and Brand of the Middle East Studies Association in their public letter to the Times, wrote that the removal of the documents from Iraq with no clear plans to return them “once again empowers outsiders to unduly influence, or even control, the narration of Iraq’s history.” They accused the Times of having “no right to possess or retain these materials,” adding that possession of the files “is not a matter that you or Ms. Callimachi or any other non-Iraqi or non-Iraqi institution is entitled to decide. These materials belong to the Iraqi people.” Their letter also warned that it would be unacceptable for the Times to make the cache publicly available because doing so could endanger the lives of Iraqis named in the documents. This particular warning was in response to the Times publishing copies of about a dozen ISIS documents, including unredacted versions of a tax form, a citation for a teenage boy found to have violated ISIS rules, and a birth certificate.
Callimachi told The Intercept that the Times is working with an outside partner to digitize and publish the documents online. She directed further questions to a company spokesperson. Danielle Rhoades Ha, the vice president of communications at the Times, did not specifically respond to The Intercept’s questions, sending a statement instead. “The New York Times recovered documents that otherwise would have been destroyed or simply abandoned,” she wrote. “Previously Iraqi security forces had been burning documents they discovered. … In every case, Times reporters were being escorted by Iraqi security forces who assisted in the collection and preservation of the documents.”
But did those forces have the authority to give those documents away? Saad Eskander, the former director of the INLA, said they did not.

“The 2016 Law on the Preservation of Records, which I personally drafted when I was the Director General of INLA, states clearly that all types of official and semi-official papers should be administrated by INLA,” he wrote in an email to The Intercept. “This Law also covers records made by Iraqi NGOs. So the above mentioned Iraqi Law does not grant any civilian or military entity the right to decide the fate of Iraqi records, let alone permitting their removal from the country.”

Again, we warned you.


March 3, 2017, she typed, "Sometimes I feel embarrassed by the extent of Iraqi hospitality."


Today, NPR's MORNING EDITION reports that the US government is hopeful that the huge win in this month's elections by Shi'ite cleric and movement leader Moqtada al-Sadr will not mean that US troops.  The report plays Moqtada's spokesperson Sheikh Saleh al-Obeidi declaring, "If the American troops are here in order to train Iraqis, help Iraqis according to certain details accepted to both governments it is accepted by Moqtada al-Sadr."

Now the US government always claims it was about training.  For example, here's the US Defense Dept this week:

The coalition training effort in Iraq is all about “making a good force better,” said Italian army Brig. Gen. Roberto Vannacci, the deputy commanding general for training for Operation Inherent Resolve's Joint Forces Land Component Command in Iraq.
Iraqi security forces continue to press the fight against the Islamic State of Iraq and Syria by rooting out and destroying pockets of ISIS terrorists in the country. From the nadir when ISIS was knocking on the gates of Baghdad, Iraqi forces have taken on the terror group and liberated almost all of the territory the group once held.


The trainers of the coalition’s Operation Inherent Resolve gave Iraqi security forces the training they needed to expel the violent extremist group, Vannacci said during a video teleconference from Baghdad to reporters in the Pentagon.


But it is combat.

The U.S.-led coalition against the Islamic State militant group (ISIS) said Tuesday that it only planned on staying in Iraq as long as it was welcome after an opponent of foreign military presence won local elections.
The remarks come after a political bloc—comprised of Shiite Muslim cleric Muqtada al-Sadr, communists and others—managed to secure the plurality of votes in last week's Iraqi election, raising uncertainties for the future of the U.S. and other foreign militaries helping local forces battle the remnants of ISIS in the war-torn country. Italian army Brigadier General Roberto Vannacci, who serves as deputy commanding general for training the joint land forces component of the coalition, said there has been no change in policy yet, but if there was, it would be up to political leaders at home.
"We are here by the request of the Iraqi government. And regardless of who won the election, I think that if this request will continue to be addressed to the coalition, the coalition will remain," Vannacci told reporters during a weekly press briefing at the Pentagon Tuesday.


But for all the pretense of just waiting to see what happens, behind the scenes?  The US government is very anxious.  REUTERS reports:

The United States has contacted members of a political bloc headed by former foe Moqtada al-Sadr after his parliamentary election victory put the Shi’ite cleric in a strong position to influence the formation of a new government, a top aide said.
[. . .]
Dhiaa al-Asadi, a top Sadr aide, said there had been no direct talks with the Americans but intermediaries had been used to open channels with members of his Sairoon alliance.
“They asked what the position of the Sadrist movement will be when they come to power. Are they going to reinvent or invoke the Mahdi Army or reemploy them? Are they going to attack American forces in Iraq,” he told Reuters.
“There’s no return to square one. We are not intending on having any military force other than the official military force, police forces and security forces.”