The Justice Department confirmed Monday what the rest of us have known since last spring, during the first few days of the U.S. Attorney scandal. Under the reign of error of former Attorney General Alberto R. Gonzales, the once-proud, once-professional Justice Department became a refuge for partisans and cronies, hired by scoundrels, and overseen by leaders who purposely turned a blind eye to the illegal machinations of their subordinates.
The damning report by the Office of Professional Responsibility establishes for all time that former Justice officials Monica Goodling and Kyle Sampson, to name just a few, violated federal law and Department policy when they "improperly considered political or ideological affiliations in screening candidates for certain career positions" at Justice. Over and over again, these lawyers and public servants put their ideological goals over the work of the nation.

That's from Andrew Cohen's "Time To Prosecute Goodling And Company" (CBS News). But guess what, Democrats still don't have the guts to impeach. You think Alberto figured this out on his own? He couldn't break the law without help. Okay, Adam Nagourney's "Why is Obama not improving in the polls?" (International Herald Tribune) includes this:


Yet in a multi-candidate race, as this one is - though Bob Barr and Ralph Nader so far are having minimal effect - victory can be claimed with less than 50 percent of the vote. Other than Bush in 1988 and Dwight Eisenhower in 1952, presidents have been routinely strolling into the Oval Office without a majority of the vote - or barely: Reagan drew just under 51 percent in his three-way race with Carter.

I wanted to highlight that because, although I don't care for Adam Nagourney, he acted like a journalist in that he included more than just two candidates. He left out the Green Party candidate but I will say, "Good job, Adamn." May others follow your lead.

Nagourney also notes that Barack's not sewing up the election. He rarely gets more than six or seven percent higher than McCain. What does it mean?

I'll give you my call and I'm no political expert: The Democratic 'leadership' shouldn't have stolen the nomination from Hillary.

I think those numbers are never going to soar. I also think Republicans do a better job getting out the vote at election time than Democrats do. Nagourney quotes some 'experts' and it's pointed out by both the Dem and GOP 'expert' that we're talking about a first-term senator who hasn't completed their first term.

Yeah, there is that.

The huge lack of experience that has the non-Kool-Aid drinkers thinking, "WTF!"

That doesn't just include those of us who voted for Hillary in the primary, it also includes the Democrats who didn't bother to vote in the primary. They couldn't decide or they didn't have time or they figured it's enough to vote in the general election. Lots of luck getting those people to the polls in November for someone with no experience.

Nagourney points out what C.I. pointed out last month (or maybe in May), the 2008 winner will not get 50% or greater in the election most likely.

I hope people are seriously considering Ralph Nader because, if not, get used to saying, "Look, there's President John McCain."

The Democratic 'leadership' selected a debutante to run for president. No experience, no relatability factor, zilch. He can drive a small portion of the Democratic Party crazy -- and make Republicans become Democrats for a day (but the Obama campaign provided them with forms that also allowed them to immediately switch back so don't count on them come November) but the base doesn't like him and he can't sew up the deal.


This is from Ava and C.I.'s "TV: No, don't tell me more, tell me more" and this section is about Katie Couric's interview with Barack Obama:

Couric's follow up question should have been, "You're saying that Afghanistan is something the full Senate committee should address and you're touting Afghanistan as 'the central front in the war on terror.' Well on January 31st, the Senate Foreign Relations Committee held a hearing on Afghanistan, heard testimony from the State Dept.'s Richard Boucher and you didn't attend that hearing. Do you think now you should have been at the hearing?"
We're sure Barack would have tried to weasel out with the claim that he was debating Hillary in Los Angeles. Yes, that night. The hearing started at 9:30 a.m. EST. With a three hour time difference between the East Coast and the West Coast and a 'new' thing called "airplanes," there was no reason for him to skip the hearing.
While the hearing was going on, Barack was speaking at the Trade Technical Community College -- which was only one of his many campaign stops that day. We do not agree with a 'war on terror,' nor do we claim that Afghanistan needs more US troops or more war. But Barack claims that . . . now. What did he say about 'ready on day one isn't enough, you have to be right on day one'? On January 31st when Afghanistan was the issue of the committee he 'serves' on, he thought it was more important to visit community colleges and drum up votes than to focus on what he calls 'the central front in the war on terror.'
Couric did better on the issue of Israel where Barack attempted to go light and airy as usual and to dismiss questions of whether Israel, in his opinion, had a right to declare a war with Iran. He insisted that was speculation and he wasn't going to speculate. (He's been far less reluctant on that subject in his speeches.) Couric pressed on, "Was it appropriate, in your view, for Israel to take out that suspected Syrian nuclear site last year?" The left may want to brace themselves for his answer, "Yes. I think that there was sufficient evidence that they were developing a site using a nuclear or using .... a blueprint that was similar to the North Korean model."
Sufficient evidence? In April, the White House released 'evidence.' As with the Iraq War, their visual 'evidence' was spotty. A videotape that revealed nothing and several laughable photographs. The Syrian government, in fact, compared it exactly to the 'evidence' offered of Iraq's WMD program (which turned out to be non-existant). In addition The International Atomic Energy Agency's director Mohammed El Baradei condemned Israel's bombing in a statement released in April, "The director general views the unilateral use of force by Israel as undermining the due process of verification that is at the heart of the nonproliferation regime."

He's not left, he's got no experience. Vote Nader! From Team Nader: 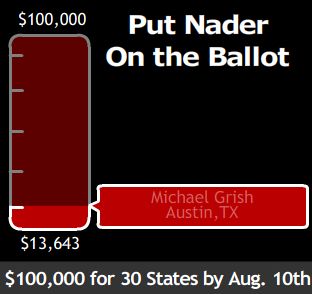 The country wants to know.

Will Nader/Gonzalez be on enough ballots in November to make a run for it?

And to be seriously considered for the Presidential debates?

And getting to thirty won't happen unless we hit our goal of $100,000 by August 10. (Which would give us $2 million for the entire campaign year to date.)

But we need to jack it up this week.

Donate now and watch your contribution fuel our road-trippers all around the country.

On the ground, things are heating up and the press is starting to take notice.

In Montana, our road trip team collected and turned in more than 10,000 signatures (5,000 required).

We've also collected enough signatures to get on the ballot in Tennessee and New Jersey.

None of this would have been possible without your help.

Every time you hit the contribute button, you fuel this historic ballot access drive.

During our last two fundraising drives, you came through with flying colors.

These are the most crucial two weeks of the campaign.

Whether Nader/Gonzalez is for real in November depends on whether we can raise the money to pay for ballot access over the next two weeks.

For a safe and healthy future.

For shifting the power from the corporations, back into the hands of the people.

Together, we are making a difference.

P.S. Thanks to all who participated in Saturday's house parties. They were a great success.